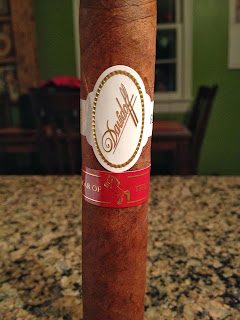 A little over a year ago I came across the new release from Davidoff, the Year of the Snake. It was the first of many limited annual releases to come, and was gathering a lot of attention in the online media. I think Davidoff is always successful in grabbing attention with their limited releases, and the reason for that is that they have appointed merchants and the customers of those appointed merchants that pay attention to limited releases. Davidoff is truly a global brand, and I would say no other company can compete with them in that sense. They blend cigars for every type of cigar smoker, and because of that they have a great market. Last year I gave the Year of the Snake the #3 ranking for my Top 25 of 2013 and know I am looking at the second release in the line. I was not able to pick these up when I was at my nearby Davidoff store, they did not have them yet, but fortunately my good friend Cigar Coop hooked me up.

The Year of the Horse marks the second cigar in this limited series, and production is set at 5,000 boxes which is more than the Year of the Snake. The cigar is a Dominican puro and is a gordo measuring 6″ with a 60 ring gauge. The wrapper is Dominican Yamasá and the binder is that Dominican San Vincente. The filler is a blend of Olor Seco, San Vicente Ligero, Piloto Viso, and Hybrid Seco tobacco. It is a firm gordo that has a lovely marbled brown coloring. I would say the coloring is between Colorado and Colorado Maduro, and it is a lovely cigar in appearance. It is odd to see a Davidoff this big, but it is still an enjoyable cigar in appearance. The wrapper is very smooth with some minor gritty qualities, and there are a few veins here and there. The aroma at the foot is that of chocolate, tobacco, raisins and soft spices, and the wrapper shows some similar qualities that are light but present. 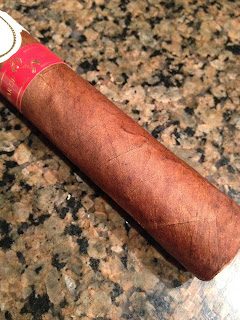 The first third opens up by showing this lovely lemon pepper flavor and there is a nice spiciness to the cigar. I am getting some strong tobacco notes with that and there is a leather quality present as well. There are hints of pear and apple notes present and it has this banana ice cream with cedar notes present as well. There is this creamy flavor popping up as well and this is a complex cigar that has tons of depth. In terms of construction the cigar is showing a fairly good burn line and there are some spots where it gets a little uneven, but it either corrects itself or I make an adjustment and it smokes perfect. There is an ash with that cigar that is a nice charcoal coloring, and it is on the darker side of the spectrum. I am getting a cool draw with this ring gauge and it is a well constructed gordo that focuses on the flavors. In terms of strength I would say the cigar smokes at a level between medium and medium full, and the body is easily medium full. I think this is a stronger cigar than the Year of the Snake, and though very different, very enjoyable. 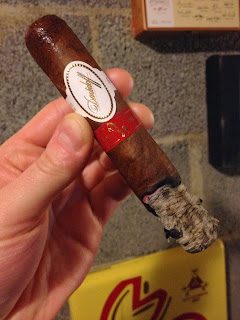 When I get into the second third of the cigar I find that the cigar is showing those core flavors that were present in the first third, and it is a cigar that shows lovely bits of Asian spices and also some fruity notes. I am getting bits of cinnamon and nutmeg, and it is accompanied by some banana, raisin, pear and apple notes. There are some tobacco and leather qualities present as well, and it is very complex. There are some soft creamy notes present in this third as well, but they are not as present as they were in the first third. The cigar still has that medium full body experience that is complex and has tons of depth, and the strength level seems to be increasing slightly with that. I would say the strength level is closer to medium full in this third and it is a cigar that shows some transitioning, and that plays a huge part on the cigar. In terms of construction I am still finding myself with some minor issues here and there, and I occasionally have to touch up the cigar to make it smoke evenly. The ash is still a firm dark charcoal colored ash, and it is holding on well to the end of the cigar. The final third shows some more transitioning from the second third, and it is a third that begins to show the natural, spicier and stronger qualities of the Dominican tobacco. The fruity notes have passed, and I am left with some natural tobacco and leather qualities. There are still a nice bit of spice notes present and it is showing some cedar and coffee bean notes as well. I don’t want to say it is less complex in this third, but more that it has switched directions in terms of flavor offerings. With those change of flavors I feel that the strength has increases to a medium full level and it is now pairing with that medium full body which has been present throughout. In some ways you can say that you began the cigar at a trot, went into a gallop and then it started bucking like a wild horse. In terms of construction the cigar is continuing to show the qualities that were present in the first and second third, and it is not a perfect burn line, but it does have that solid dark charcoal ash. The final draw to the cigar is cool and shows those dark flavors that have been present in the third. 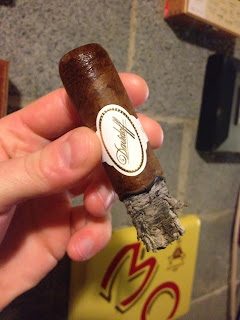 This was a lovely cigar that showed a nice bit of complexity and a nice bit of depth with that. There was some transitioning from beginning to end and it was a cigar that grew in strength and body as it progressed. I felt that it started out as a very complex Davidoff and ended like a strong Dominican puro can. I don’t think the flavors necessarily lessened, but they went in a direction that was completely different from the beginning. I will say that this is a solid Davidoff and a great Dominican puro. Henke Kelner is a genius to begin with, and he showed that he can blend an amazing 60 ring gauge with no troubles. Besides the minor issues with the burn line I would say this cigar performed wonderfully from beginning to end and is a great addition to this annual release collection. I do not think it competes with the Year of the Snake, there are few cigars that will ever be able to do that, but it is a great cigar. This is definitely one of the better 60 ring gauges on the market, and probably Top 5 all time. I am giving this cigar a 91 rating and would recommend it to so many smokers out there. 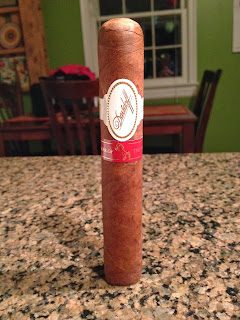 *cigar for this assessment was provided to me by Cigar Coop