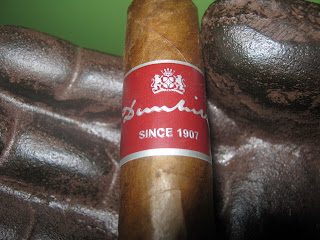 When it comes to cigars that keep a fairly low profile in the cigar world buzz, Dunhill is definitely one of them. The Dunhill brand itself has been around for many years now, but what it is most known for is actually not even in cigars. I should say that the Dunhill cigar brand is no longer owned by Dunhill, it is actually owned now by British American Tobacco, but before that it was a part of the tobacco line in the Dunhill brand. Founded by Alfred Dunhill, Mr. Dunhill opened his first cigar shop in 1907 and before the Cuban Revolution he had built up a positive relationship with the manufacturers in Cuba. For years he has his own lines made, and when the Revolution occurred in Cuba, he was so established that he was able to have his lines produced for him still. Some of his most well known of cigars was produced during the periods of 1982 to 1991, and some would consider him the “challenger” to Davidoff Cigars.

Eventually Dunhill Cigars stopped production with Cubatabaco, now Habanos S.A., and the cigar production was moved to the Dominican and Honduras. However, eventually Dunhill would stop producing cigars all together, and that side of the company was sold to British American Tobacco. Since then, British American Tobacco has been producing high quality cigar lines under the radar, and it was in 2003 that they introduced a limited production line, Dunhill Signed Range. This line was initially crafted in the Dominican Republic, but after four years of production there they moved it to Nicaragua for continuous production, and had the Toraño Family placed in charge of production. You can still buy original Dunhill Cigars from Cuba at auction, and they are often the highest priced cigars there.

The Signed Range line features tobacco that has been aged for a minimum of three years, and like many Torano Cigars, features tobacco from around the world. The wrapper comes from Nicaragua, I would like to say Jalapa Habano Seed, and underneath that is a Cameroon binder. I always find it entertaining when manufacturers use Cameroon tobacco in the binder because the tobacco is so flavorful, and can add so much to the cigar. The fillers are Dominican and Nicaraguan, and I really believe those are the two best regions for filler tobacco. For this review I chose the Toro vitola, and the cigar measures 6″ with a 50 ring gauge. It has a smooth wrapper, very silky, and there are few veins present. It is very firm in hand, and the coloring is really that of milk chocolate, definitely between Natural and Maduro in coloring. The aroma captures those flavors you get with a milk chocolate covered raisin, and I am picking up raisin, cocoa, spices and wood on the foot.

After cutting the head and getting a flavorful and plentiful cold draw I light up this beautiful and slightly oily cigar. After lighting I quickly begin to pick up the rich and bountiful flavors the cigar has to offer. There is a nice rich earth presence on the forefront of the cigar, and it is also showing some damp wood, spices and sweet notes. It is on the finish that I pick up those cocoa flavors as well, and  you can also some woody notes as well. You really can pick up the flavors from the Cameroon binder in this cigar, and it’s pretty sweet. The burn is slightly wavy in this first third of the cigar, but it is producing a nice solid gray ash that is holding on to the cigar very well. The strength of the cigar is at that solid medium body level, and I am getting the flavors long after each draw.

As I enter the second third of the cigar I am finding that the flavor profile is remaining similar to what it was in the first third, and it is a sweet and rich cigar. Those rich earth flavors are really showing lots of dark cocoa notes, and it is being slightly balanced by some spicy notes and hints of wood as well. There are still those sweet notes, of cocoa and wood, present, and it is a cigar that really lingers on your palate long after smoking. The strength is keeping at that medium body level, and it is very smooth as well. The burn really corrected itself in this third, and I found it almost dead even throughout. The ash was still holding on to the cigar from when I first lit up the cigar, and it was producing a large amount of smoke.

Entering the final third, I can see that this cigar is going to remain fairly similar to how it has been thus far as a cigar. There are really no changes to the cigar an inch from the end, and it is really showing lots of sweet and rich earthy flavors to the cigar. The spices became somewhat stronger in the final third, but overall the flavors were of rich earth and cocoa. The sweet woody flavors remained as well towards the end, and though it was not overly complex, the cigar did provide a constant amount of semi-complex flavors that were thoroughly enjoyable. I smoke the cigar down further, toward the nub, and even at the end it was smooth and rich and medium in body. The burn line remained perfect in this final third, and that nice gray ash remained on the cigar when I put it down.

I really enjoyed this cigar, and while it was not my preferred flavor profile as a cigar, I know there are a lot out there who would prefer it. The cigar really captures that sweet and rich flavor profile while remaining at a solid medium level, so there are some who could begin the day with this cigar, and some who would find it the perfect evening cigar. To me, I could smoke it anytime of day, but most likely I would smoke it later in the morning. The cigar really smoked wonderfully in the second and final third, and with the core flavor profile, was a very well made cigar. If you are looking for a special occasion cigar that is along this flavor profile then I would look no further. With the price range, most would not find this an everyday cigar, but it is still very enjoyable. I give this cigar 90 points, and would definitely smoke it again in the future if I am craving a cigar along these lines.