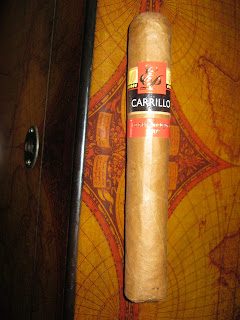 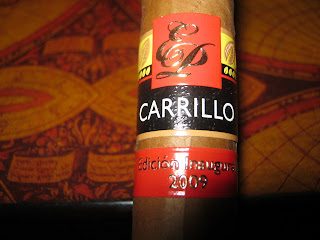 I was digging down in my humidor the other day, and I stumbled upon this. I remember that I got it when they were first released, but somehow found it’s way further down into my humidor. The cigar is made by Ernesto Perez-Carrillo in the Dominican Republic. Before making his own brand, Ernesto was the leading man behind General Cigars La Gloria Cubana brand. He was making amazing smokes for them for years, and is now making amazing smokes for himself. The cigar measure 5 3/8″ with a ring gauge of 52, and is covered in an Ecuadorian Habano wrapper. Underneath he has two binders, from Nicaragua and the Dominican Republic, and filler tobacco from those same countries as well.

I was really looking forward to this smoke, because I have always loved his smokes under General Cigars, and I imagine now he will be able to make cigars closer to what he wants. This cigar is a limited edition cigar, and was launched almost like a “prequel” to his future lines. The cigar itself is very beautiful, the wrapper has a beautiful golden straw color to it, and is very silky to touch.

Once you light this cigar, you are righted away greeted with the fact that this is NOT a La Gloria Cubana cigar. I love La Gloria Cubana cigars, but the fact that he went down a different road is awesome. The cigar is very medium in body and is very very creamy. Behind the creamy notes there is some wood (predominantly cedar), with some spice, grass, graham cracker, caramel, and really lots of other different flavors playing off one another. I drank this cigar with a coffee and it really matched well, and I imagine it would go great with a nice Bordeaux or Burgundy. This cigar was very elegant, burned perfectly, and the ash held on strong as well. It took me a long time to smoke this cigar, just because of the tobacco in it, and that was great. I feel that sometimes robusto format cigars smoke around 45 minutes to an hour, but this smoked for about an hour and half. I hope to find a couple of these cigars some how later on.

One thing I love about this cigar, and future cigars to come, is that this is going to be a really small family/boutique company. Ernesto is not looking to make a mass amount of cigars, but rather a small amount of high quality cigars for brick and mortar shops. I think this cigar is a great introduction to his current blends, and look forward to trying his others. I give this cigar a 92. If you ever stumble across these, splurge!