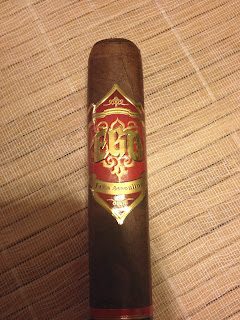 Showcasing at the 2013 IPCPR was Felix Assouline Cigars. The company is new in name to the industry, but is led by a man who is fully aware of how the industry works. Felix Assouline has been a manufacturer in the past, also a retailer, and has decided that he was going to come out of retirement and start up a new company. He has his own factory, not just for making cigars, but also a box factory, and has his own tobacco fields as well. He has four lines on the market, and one of them is a resurrected line that received a 90 rating from SMOKE Magazine years back. An interesting piece of information about the company is that all cigars they make are box pressed. The company decided to take this approach as Felix knows that pressing a cigar stretches the wrapper and allows it to release all the great qualities the tobacco has to offer. But enough with the introduction, let us look at the re-blended EGO.

The Perfect is a box pressed figurado, and like all cigars in the line, is box pressed and a figurado. Felix Assouline has stated that he believes that cigars excel in a box pressed format and I would agree that it helps out wrappers tremendously. The cigar measures 5″ with a 52 ring gauge and is rolled very well, it is a firm cigar in hand and has a wrapper placed perfectly. The wrapper is Habano Criollo ’98 and it shows a few minor veins throughout while remaining slightly oily to touch. There is a beautiful Colorado to Colorado Maduro coloring and you can tell time was put into this cigar. The binder is Indonesian and the filler is a blend of Nicaraguan and Honduran tobacco. There are a lot of manufacturers using Indonesian tobacco as the binder leaf, and I would like to ask them the reasoning behind this. The cigar features an aroma on the wrapper that is of wood and damp tobacco, and the foot shows bits of nuts and cedar. It is not giving off many spices, and the cold draw is perfect and flavorful. 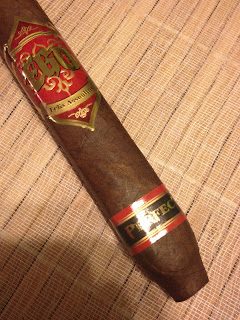 The first third of the cigar is showing a lot of salted wood and nutty qualities. I am getting some almond and cashew notes as well, and it is very creamy and tasty. There are some soft spice notes in the background, but nothing too much and it is a very easy and enjoyable cigar. I am loving the creamy addition with the wood and nutty notes and it is perfect cigar for the late morning or early afternoon. I would say the body is at a medium level and the strength is just south of medium. It is a very smooth cigar that has a lot of nice flavors, and it focuses on the flavors above all. In terms of construction the cigar is terrific and it is showing a perfect burn line with a solid charcoal colored ash. The ash is holding on firmly and does so way past the first third. The draw to the smoke is easy and cool, and I am getting a lot of smoke with each draw. I was expecting more body and strength going into the cigar, but I like the direction it is going right now. The second third shows a rise in the spice category, but very slightly as the cigar is still showing that cream, wood and nutty quality from the first third. There is a solid cedar flavor that is pairing with those almond notes, and it is followed by some cashew and peanut qualities. While there was not a lot of transitioning in this third, the cigar does have a lovely core flavor that is tasty and it is easily a cigar that I could begin my day with. To me it is a solid cigar that has a lovely core flavor profile that is consistent. In terms of body and strength the cigar is smoking at that same level from before and I am getting a medium body cigar with a strength level just below medium. The construction on the cigar is phenomenal, and with a razor sharp burn line that cigar is producing a nice bit of smoke with its cool draws. The ash is holding on well and it is a soft gray colored ash. You can’t ask for more in terms of construction with a cigar like this. Yes you could say you want more flavors and body, but in terms of construction the cigar is perfect. 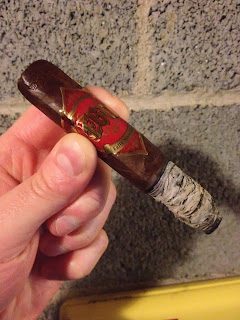 I am in the final third of the cigar now and even though the flavor profile has not changed since the beginning, it is a nice core flavor profile that is tasty. There are times when I want a cigar to show a lot of transitioning in the flavor department and really throw me for a loop, but there are other times where I am looking for a cigar that has a solid core flavor profile that has some depth but nothing over the top. This is a cigar that revolves around those creamy, woody and nutty qualities, and it is a cigar that many would enjoy. It may not speak to those cigar nerds, but a lot of smokers on the market would enjoy this cigar. I love the balance between the almonds, cream and cedar, and it is a perfect pairing. The body and strength have reached a medium level in this third and I would say the increase has been a nice change for the strength. In terms of construction I am merely repeating what I have said thus far, and the cigar is performing wonderfully. The final draw to the cigar is cool and shows a nice nutty finish.

I have yet to smoke the other lines by Felix Assouline but I can say that this is a tasty smoke. I would definitely smoke these cigars in the morning with a cappuccino and I know a lot of guys who would smoke this in the afternoon and evening. I would recommend this cigar to a lot of guys who are looking for a cigar that has a nice core flavor profile, but not over the top in body and strength. It is simply a solid cigar that produces core flavors that remain present from beginning to end. I feel that Padron and Davidoff do this as well, and they are successful with it. Sometimes producing a cigar that is complex and changing is not going to do well for a large portion of the consumers out there. Sometimes making a cigar overly complex hurts it and you lose the direction of the cigar when you do so. This is a cigar that focuses on delivering the flavors it does while smoking at a medium level from beginning to end. I think the cigar will do well on the market, as a lot of smokers are looking for cigars like this, and the fact that it also comes in bigger ring gauges does well for the company. I am giving the cigar a solid 88 and would recommend it to a lot of guys. Is this going to speak to a lot of cigar nerds out there? No, but it is going to speak to a majority of the market. 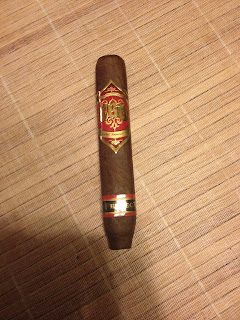