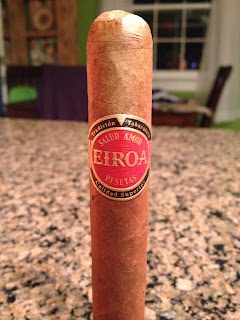 I have had this conversation with many people and we all seem to agree. When it comes to Honduran tobacco, manufacturers either make a great blend or blend that fails to deliver the greatness of Honduran tobacco. There seems to be very little in between ground when it comes to Honduran tobacco and cigars released with all Honduran tobacco. Don’t ask me why that is, but you either have a winner or a loser. I think with other countries like the DR and Nicaragua there is more diversity when it comes to the scale of how good the blend/cigar is. Let me state that I don’t think there is anything wrong  with Honduran tobacco, I just believe that it is harder to work with. I do believe that it is very similar to Cuban tobacco in the sense that it does not have that diversity that Nicaraguan tobacco has. When it comes to Honduran tobacco though there is one person that comes to mind, and that person is Christian Eiroa.
Coming out of El Aladino, I think this is the greatest release Christian has had in a long time. EIROA really pays tribute to his family and I believe it is one of the most personal cigars he has blended. As you can imagine from my introduction, it is a cigar that is made with all Honduran tobacco. They do not give a breakdown on the tobacco, but I imagine he is using some Corojo in the blend. Christian has been working with Honduran tobacco his whole life and if anyone knows how to blend with it, it is him. For this review I chose the robusto offering and the cigar measures 5″ with a 50 ring gauge. The cigar has a wrapper that is light in coloring, definitely a light Colorado, and it has some minor veins and tooth throughout. To me the coloring is that of light clay soil, almost sand like. It is a firm cigar to touch and while simple is classic and elegant. The wrapper is giving off an aroma of floral, leather and tobacco notes, and I am getting some graham cracker, cocoa and dry wood notes from the foot. 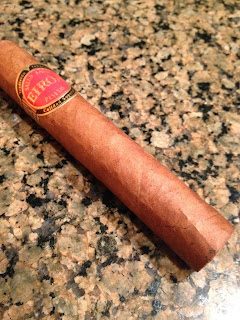 The first third really shows a lot of elegant flavors that are scrumptious. I am getting this lovely peanut butter flavor to begin with, and it is a peanut butter flavor that some red pepper notes as well. There is a nice sweet floral flavor with the nutty notes and I am getting some soft milk chocolate and tobacco notes following that. The finish has some tasty spice characteristics and it is a great smoke. The construction on the cigar is absolutely amazing and it has razor sharp burn line that has a classic charcoal colored ash with that. The draw on the cigar is perfect and it is cool with a lot of smoke being produced. To me the cigar has a strength level that is right between medium and medium full, and the body is at a level slightly above medium. This is very complex and so enjoyable, a classic Honduran puro. 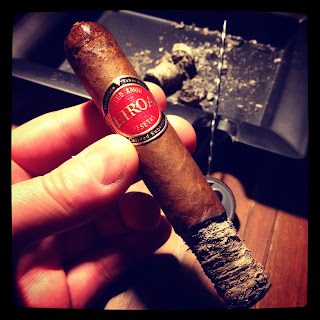 When I get into the second third of the cigar I find that the strength of the cigar is increasing and the flavors are getting bolder as well. There is a meaty flavor that is really beginning to make an appearance and it is accompanied by those spice flavors from before. I am getting some Asian spice notes in this third that shows bits of cinnamon, red pepper and anise, and it is pairing with those tobacco and cocoa notes from before. There are still some sweet floral and nutty notes and it is a complex cigar. There was not a lot of transition from the first third to this third, but it had tons of depth. The construction has remained wonderful from beginning to end and there is that nice charcoal ash which is holding on firmly. You can see the tooth in the ash and the cigar is smoking cool and producing a great bit of smoke. I would say the body and strength are a medium full level in this third and I look forward to seeing hot it advances into the final third. 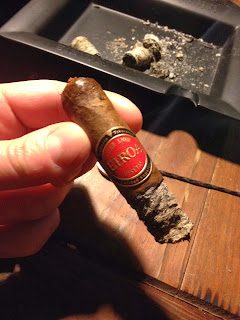 The final third shows some more growth as a cigar and it is finishing at a level that is simply amazing. I am getting this new creamy finish and it is pairing with wood and cocoa notes and it is amazing. The spices have faded some in this third and it is showing all the other flavors much more than before. There are still those leather and sweet floral notes, and it has a finish that is showing some coffee beans paired with this peanut butter flavor. In terms of flavors the cigar has everything you could ask for and is a cigar that all need to try. The construction is amazing and it has a razor sharp burn line all the way to the nub. The ash is keeping that firm quality and keeping that charcoal coloring as well. The final draw is cool and I am smoking to a level where I am burning my lips and not wanting it to end. The strength finishes at a medium level and the body is right there as well, what a great finish! 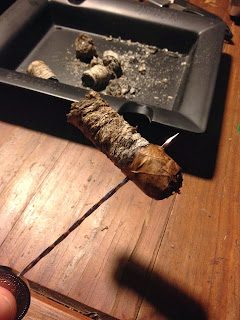 I had to attach a close up photo of this ash because it is simply gorgeous. You can really see the tooth clearly on the ash and it is an amazing smoke. The EIROA is a cigar that takes Honduran tobacco to a new playing field. It is the best Honduran puro on the market and I think a lot of smokers would open up to this cigar. The cigar screams balance and complexity, and from beginning to end this cigar did nothing but capture my attention. It was an easy smoke in the sense that there were no worries in terms of construction, and it had a razor sharp burn line with a beautiful ash from beginning to end. There was a lot of depth and transitioning in each third and it had a great amount of balance in terms of body and strength as well. I believe that this cigar will reach out to those who were not fans of Honduran tobacco before and bring them in. Right now I think this is one of the best releases in 2013, and definitely in the top three of regular core line releases. 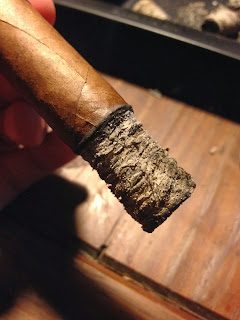 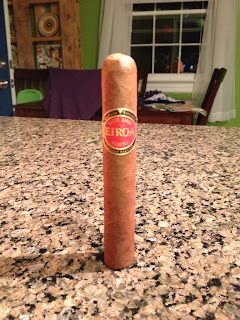