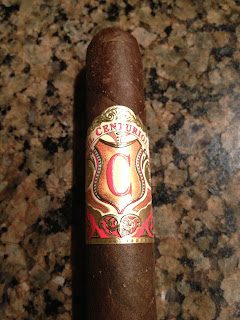 In 2007 cigar smokers were presented with the opportunity, though a limited one, to smoke probably one of the best cigars released that year. The cigar was El Centurion, and it was a limited release cigar that was produced by Don Pepín Garcia in Nicaragua. The cigar was made at their old, but now revived, Nicaraguan factory called Tabacalera Cubanas S.A. Production was limited to three sizes, and production for each size was 850 boxes of twenty cigars a box. The cigars did very well in the retail store that I went to, and I remember them coming and going fairly quickly. At the time Don Pepín Garcia was known but really just gaining recognition among cigar smokers. I consider this cigar the best release from Don Pepín Garcia and My Father to date, and interesting enough another great cigar released that year was the Padrón 1926 Serie 80th Anniversary. I also consider that cigar to be the best cigar ever released by Padrón. 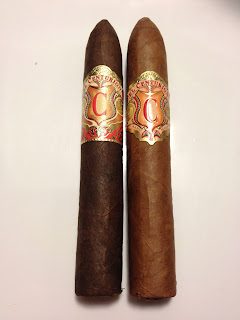 El Centurion was a Nicaraguan puro and was composed of Nicaraguan Criollo ’98 and Corojo ’99 tobacco with a Nicaraguan Habano wrapper. I was fortunate to smoke through the sizes throughout 2007 and even get my hands on a box of the Emperadores as well. Knowing that the company had a major hit with the cigar, My Father began to release three packs of a cigar called Special S with purchases and at events. The cigar is based off of El Centurion, and showed similar packaging with amazing flavors. I don’t know if that cigar grabbed so much attention of cigar smoker that they decided to release a new version of El Centurion, or it was in the works, but earlier this year My Father began to announce the release of El Centurion 2013. 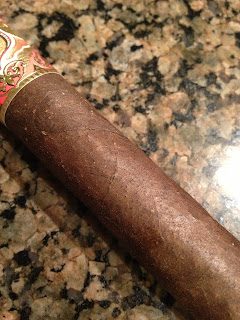 For 2013 My Fathers Cigars is releasing the 2013 El Centurion in four vitola offerings. For this review I chose the Robusto which is the smallest cigar in terms of ring gauge. The cigar measures 5 ¾” with a 50 ring gauge and is made in Nicaragua at My Father Cigar S.A. The wrapper on the cigar is Nicaraguan, and is Sun Grown Criollo ’98. The binder is Nicaraguan, type not disclosed, and the filler is a combination of Nicaraguan Criollo, Corojo, Habano and Sancti Spiritus. Sancti Spiritus is the same type of tobacco used in L’Atelier, but this is Nicaraguan and not Ecuadorian. The cigar has a lovely triple cap in place and has a dark coloring that is easily classified as Maduro. There are veins throughout and it is smooth in parts and bumpy in others. I would not classify the cigar has being beautiful in appearance, but it does possess a great aroma. The aroma shows a lot of dark coffee and dark earth qualities with some damp wood and leather as well. 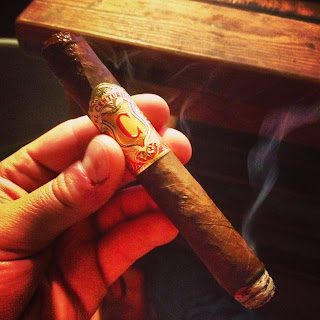 The first third has a softer beginning than I expected, but has some nice flavors present. I am not getting that peppery beginning to the cigar that you sometimes get with smokes bearing the name My Father or Don Pepin, but it is showing a dominant leather flavor. There are some espresso, black pepper, oak and cocoa powders as well, but I am getting tons of leather to the cigar. I would say the body of the cigar is between medium and full, and it has a strength level that I would classify as medium to medium full. It is a dark cigar in the sense of the flavors offered, but very balanced. The construction on the cigar is terrific and it is producing a nice charcoal colored ash that has an even burn line. So far the first third has a nice beginning, but it is not blowing my mind as I hyped the cigar up to do. (That is my fault as a consumer, no one else’s.) 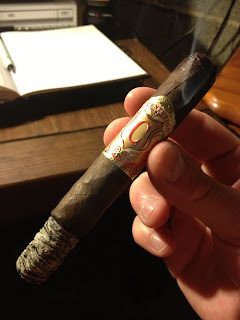 When I get into the second third of the cigar the flavors grow in terms of complexity and depth and there is a definite chocolaty flavor profile to the cigar. It is pairing with this damp earth and barnyard flavor, that when added with the leather and pepper notes make a very complex cigar. It is a rich and bold cigar and it shows a lot of characteristics similar to Flor de las Antillas. I would say the body in this third is closer to medium full and the strength is at the same level. The body and strength are progressing to an equal level that solidifies the balance that the cigar possesses. I am definitely digging the second third over the first third, and at the halfway point the cigar really opened up. The construction on the cigar is still terrific showing an even burn line and solid charcoal ash, and as always, My Father Cigars S.A. has produced another cigar with terrific construction. 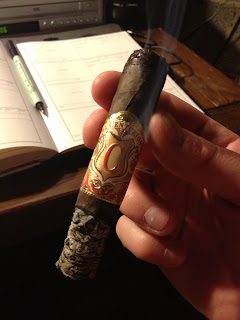 I am in the final third of the cigar now and the flavors are really showing a crescendo. There is a nice cinnamon, clove and red pepper present with the cigar, and it has a nice chocolaty and oaky flavor with that. I am getting some espresso beans and leather with the cigar also and there is not much else you could ask for with the cigar. With a medium full body and a medium full strength level, the cigar closes wonderfully and has a nice cool and flavorful finish. The construction in the final third remains at the same level as it has in the first two thirds, and that is with a perfect burn line and a nice solid charcoal colored ash. The final third shows the true transitioning and growth the cigar has to offer, and is the best part of the cigar. It has a finish that makes you want to light up another one immediately afterwards.

You really cannot compare this El Centurion with the original. The two are completely different cigars and offer the smoker something different entirely. They are both examples of great Nicaraguan puros but on different levels. I would say the new El Centurion is a darker, bolder and richer cigar overall, while the original El Centurion is more elegant.  You can’t say that Russian Imperial Stouts are better than Belgian Trappist beers or that Malbecs are better than Pinot Noirs. They are both very different. The construction on El Centurion 2013 was stellar from beginning to end, and it offered a wonderful flavor profile that really grew in the second half of the cigar. It has a solid medium full body and strength level, and it is a cigar that reaches out to a lot of modern day smokers. I myself personally care for the original El Centurion, but given as that is no longer in production I will be smoking these. I give the cigar a solid 92 and will be smoking many of these in the future. There was a particular individual who said the cigar is like a Flor de las Antillas with a Maduro wrapper and I see his point. It shows a lot of those flavors with a richer and bolder flavoring added. 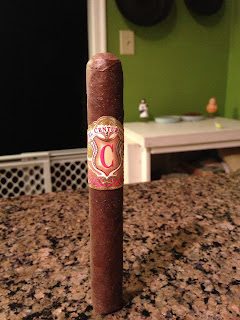