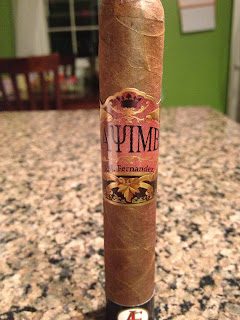 When Columbus reached the Greater Antilles he came across the Taíno people. It was from them that Europe learned of tobacco and were introduced to the cigar. At the time it was not what it is now, much more rough then, but still a cigar. Most likely when he came across a group of the Taíno, whether he was inland or on the coast, he was brought to their village and presented to their leader. This man would have taken on the name El Mayimbe. It can be translated as “village chief,” and has now taken on the title of an individual that loves to be around people and have a good time. This year A.J. Fernandez announced his first limited edition smoke, and the cigar would be called El Mayimbe. Fernandez has had hits with his San Lotano and Oval lines, but none have been limited edition smokes.
El Mayimbe is made at Tabacalera Fernandez S.A., the ever growing and largest cigar factory in Nicaragua, I believe. The cigar comes in four vitolas with all sharing the same ring gauge. For this review I chose the robusto and the cigar measures 5″ with a 56 ring gauge. Total production on this cigar was set at 10,000 boxes with ten cigars a box, 100,000 cigars. The cigar features a select Pennsylvania Broadleaf wrapper and has a proprietary binder that is referred to as AJF. They do not say where the tobacco comes from. The filler is a two country blend and is composed of tobacco from Jamastran Valley in Honduras and the tobacco from Nicaragua is proprietary and referred to as AJF Privato. The wrapper has a wonderful aroma that shows lovely rich chocolate qualities, and is paired with some citrus and pepper notes. The filler has a nice bit of spice with tobacco and chocolate notes as well. The cigar is a solid maduro and it features a smooth wrapper that is not oily or gritty, but has some veins here and there. 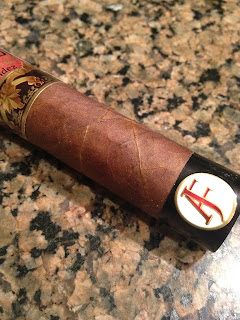 The first third begins by showing some awesome spice notes. I am getting some bits of cinnamon and pepper up front, and it is followed by this lovely sweet rich chocolate flavor. There are some nutty notes with that, bits of almond, and it has a nice leather, wood and tobacco finish. It has that great Pennsylvania Broadleaf flavor and it is a an awesome smoke. In some ways it reminds me of the Diesel when it first came out, but much better and bolder. I would say the body is at at medium full to full body and the strength is at a solid medium full level. The construction on the cigar is top notch and it is showing an amazing burn line with a lovely light gray ash that is near white in coloring. So far El Mayimbe is an amazing cigar and a true game changer for my Top 25 of 2013. 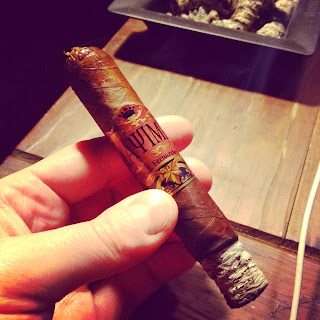 In the second third the cigar calms in terms of spiciness and pepper, but the rich cocoa and earthy qualities are still there. I am getting some soft pepper still, but it is softer than before and it is now giving this Mexican hot chocolate flavor profile. The leather and wood qualities are still there and it has a nice sweet tobacco finish. The body and strength are remaining at that medium full level and it is a great Pennsylvanian Broadleaf wrapper. I love broadleaf from PA and AJ knows how to use it well. The construction in the second third is a continuation from the first third and it is smoking wonderfully. The perfect burn line is accompanied by a beautiful ash that is light gray in coloring, near white, and the amount of smoke being produced is awesome. I am loving this cigar and can’t get enough of it. I am in the final third of the cigar now and it is showing a rich finish. You can really get the flavors from the wrapper on this cigar and I thought it would be softer with the larger ring gauge. There is an awesome chocolaty richness for the most part, but it also has a lot of earthy qualities with that. The finish shows the wood, leather and tobacco qualities as well and it is a nice finish to this smoke. The body and strength are finishing at that medium full level from before and it is a perfect cigar to end the evening with. The construction in the final third remains perfect and it has from the beginning. I have never had issues with construction from AJ and this is no exception. Throughout the final third I was getting a lot of smoke on the finish and the final draw was cool and packed with that rich chocolaty finish. 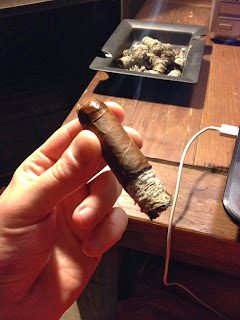 I think this was a solid limited edition from A.J. Fernandez and it was a cigar that showed his use of tobacco. I would not expect a puro from him, not for a cigar like this, and I am glad he did not go that route. I think AJ is the best one to use Pennsylvania Broadleaf and that is because he knows how to use it. He is able to balance it with his blends and not have it overpower the cigar. Like Pete Johnson with Connecticut Broadleaf, AJ is the King of PA Broadleaf. El Mayimbe is a medium full to full body cigar that delivers a rich flavor profile that provides a nice bit of complexity and depth from beginning to end. The cigar is constructed wonderfully and it really pays tribute to how great he runs his factory. I think it was wise for him to make the cigar in a larger ring gauge, and I say that because he knows who smokes his cigars. He really reaches out to a lot of the smokers on the market that are not just cigar nerds, but appreciate wonderful blends. I am giving this cigar a solid 92 and will enjoy these down the road. 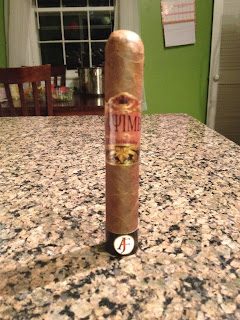