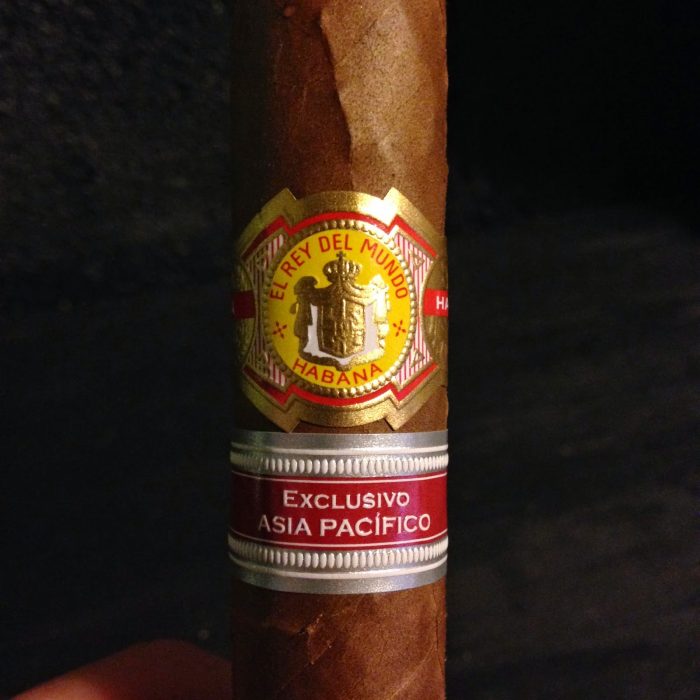 An El Rey del Mundo regional edition? For Tuna, this has the potential of being a disaster, the regional edition that it is. So to truly test this Habano, we are going to have Tuna review it and not Catfish. Will this end well? Who knows, but let’s take a look at this two year old El Rey del Mundo Aniversario Edición Regional Asia Pacifico and see how it smokes for Big Tuna.
Released in 2012, the El Rey del Mundo Aniversario is a regional release for the Asia Pacific, and at the time, production was capped at 4,000 boxes of 20. The Aniversario is a massive Robusto Extra, classified as a Geniales, and measures 150 mm (5.9″) with a 54 ring gauge. It is composed of all Vuelta Abajo tobacco, and is made at El Rey del Mundo Factory. The Habano is massive and it sports very few veins throughout. It is silky in texture and has a lovely Colorado coloring. The triple cap is applied fairly well and it is well rolled, and you can tell more time is put into the Regional than that of regular production. The foot is showing aromas of soft fruit notes and it has some cedar, hay, and honey flavors. The wrapper is showing some soft wood and tobacco notes, and there are some spice qualities present as well. 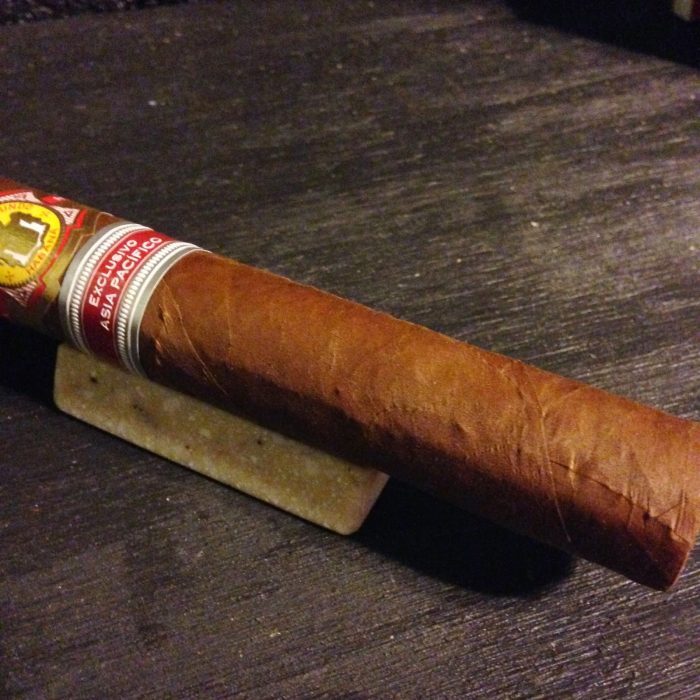 The Habano begins by showing some lovely soft stone fruit notes, and it is also showing some tropical fruit qualities. I am getting hints of pineapple, and they are pairing with some nectarine like flavors. They are matched with some clove, cinnamon, and soft pepper notes, and it is a complex and beautiful smoke. There are some hay and cedar like flavors on top of that, and this is a smoke that has really opened up with some age, and will get even better with more years of aging. The construction is absolutely phenomenal and it is showing a cool draw that is open, producing a nice bit of smoke. The ash is holding on firmly at the end and it has a dark charcoal coloring which is great with the wrapper. I would say that it is smoking at a mild to medium level in terms of strength, and the body is there as well. 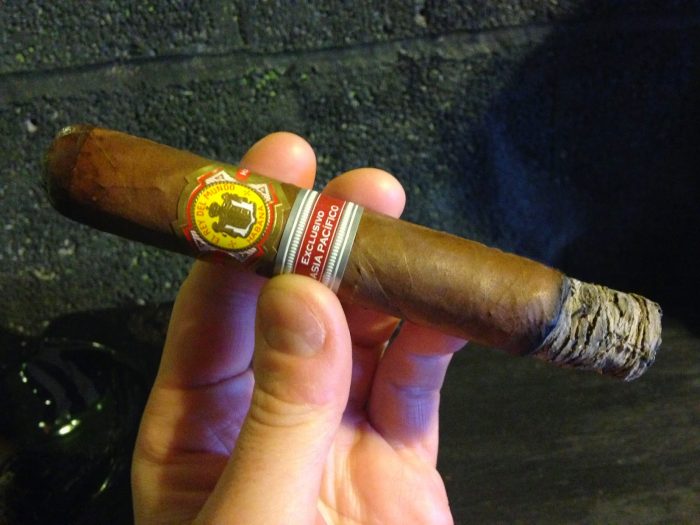 When I get into the second third of the Habano I find that the flavors show some slight transitioning and they are beginning to show some softer fruit qualities. I am still picking up some pineapple notes, but they are softer and the same goes for the nectarine flavors. There are touches of ginger present and it is paired with those cinnamon, cloves and soft pepper notes. I am getting a lot of cedar and hay on the finish, and it is a light but flavorful smoke. It is a flavor focused smoke, and this is much better than a lot of regular production El Reys. The construction is still solid as well and it is showing a fairly even burn line with that lovely dark  charcoal ash on the end. The draw is cool as well, and it is giving off a lot of smoke. I would say it is smoking at that level just south of medium, and that goes for strength and body.

I am in the final third of the Habano now and it is showing some additional transitioning in this final third. The stone fruit notes have faded completely and it is now showing some tobacco, cedar and hay like flavors. The spices are still present, and it is showing the pepper and cinnamon notes which are pairing wonderfully with the more natural flavors. When the Habano reaches the final third, it has changed quite a bit, and it is closing in a way that is showing some youth still. It needs a little bit more time to really close at the level that I want, but it is finishing better than it use to. The construction remains top notch though in the final third and it is showing an even burn line with a solid charcoal ash on the end. The draw is cool, giving off a lot of smoke, and it smokes cool to the nub. The Habano is smoking at a medium level in terms of strength and body, and the growth level to the end is perfect. 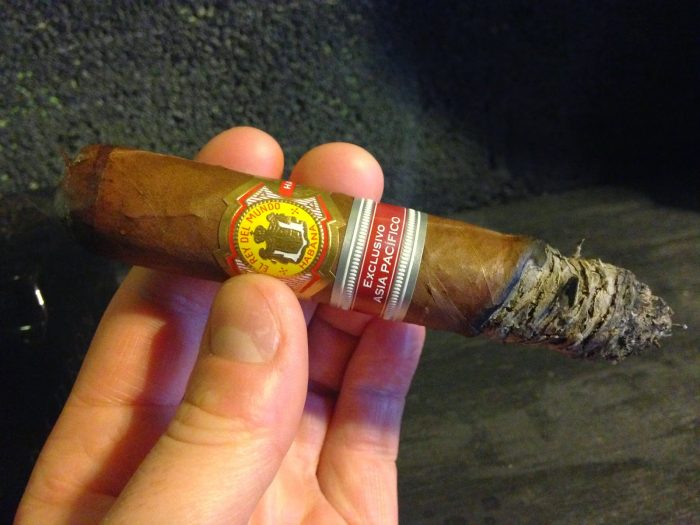 This is a Habano that has aged well, and while it is not fully ready to be truly enjoyed, it is showing a lot of promise and I think in another year or so it will be amazing. The construction has never been an issue with this large smoke, it actually smokes great in the larger format, but it was the flavors that were lacking a while back. I can say now though that the flavors have really begun to pop, and they are truly present in the first and second third. When you get to the final third, you can taste the youth still, but you see that the flavors will be making an appearance there and be present by late 2016. I think anyone who is a fan of El Rey del Mundo will love this offering and find that it is a great regional edition. Myself, I believe it is a successful regional edition, and delivers what El Rey del Mundo and Asia Pacifico is all about. I would say when young, they were smoking at a level between 86 and 88, but now they are closer to 89 to 91. I think with three more years of aging, they will be at a 93-95 level. 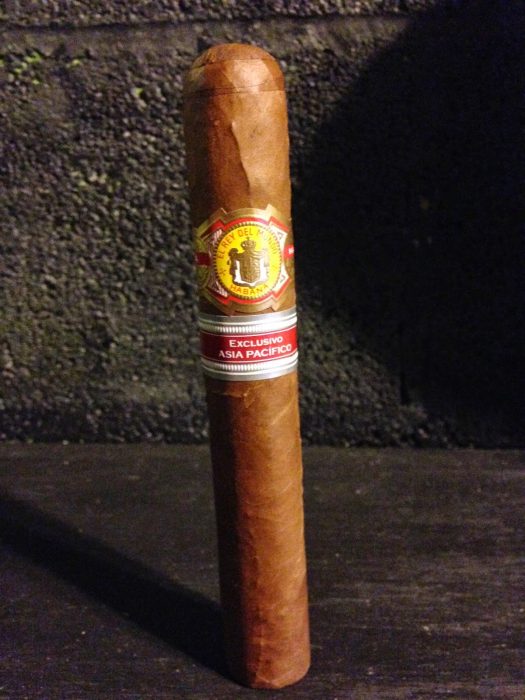