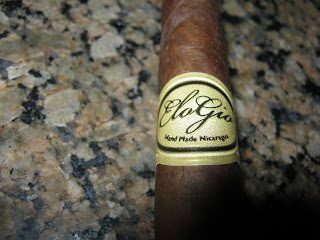 Alejandro Robaina was one of Cuba’s most famous tobacco growers; actually he was probably the most famous grower. Alejandro grew some of the best tobacco for Habanos S.A., and his farm was one of the few that was privately run, and not run by the government. His name became so popular that eventually they named a cigar line after him, Vegas Robaina. Funny story about that is that he swore none of his tobacco was in that line. Since his passing, his grandson Hiroshi has taken over the farm, while his son runs one of the more famous La Casa del Habano shops in Havana, Cuba. With the Robaina name remaining popular in Cuba it is slowly becoming more popular in the United States.

Located in Esteli, Nicaragua under the direction of master blender Carlos Pereda Robaina is EloGio Cigars. The company produces less than 50,000 cigars a year, and is truly a boutique company. Carlos is also a grandson of Alejandro Robaina, and what his relation to Hiroshi is exactly I do not know. I imagine that he spent many a years working with Hiroshi, and even A.J. Fernandez of A.J. Fernandez Cigars in Cuba learning from the great Alejandro Robaina. Currently EloGio Cigars has two main lines, along with a limited edition line, and use Nicaraguan tobacco predominantly. I say predominantly because just recently they began using Ecuadorian Habano tobacco for the wrapper on the Serie LSV line because of the difficulty in growing tobacco in one of their regions. So far I have only smoked the Serie LSV line, but I can tell you that it is truly a magnificent line.

The Serie LSV for this review consists of tobacco from the new blend, and it is not a Nicaraguan puro. The wrapper on this cigar is a Habano seed, and it comes from Ecuador. The binder is Nicaraguan, from what region I do not know, and the filler consists of tobacco from the Condega and Jalapa regions of Nicaragua as well. For this review I smoked the new lancero vitola, and it measures 7″ with a 38 ring gauge. The cigar is beautiful in hand, and is rolled in the Cuban fashion. With a great triple cap, the wrapper has a beautiful dark brown color to it, obviously a dark Colorado Maduro wrapper. It is interesting to see the wrapper coloring variance between the original blend and the new blend. The new blend has a much darker wrapper, but shows similar qualities. There are few veins present on the oily wrapper and it is very toothy. I hold the end of the cigar, and the wrapper to my nose to be greeted with great aromas of spice, natural sweetness, coconut and leather.

As I enter the second third of the cigar the flavor profile is still very similar to that of the first third, but I really don’t want it to go anywhere. There are some more definite Asian spice notes present in this third, and that is the same for the wood flavor. It is still showing those enjoyable coconut milk flavors, and it leaves this creamy unsweetened coconut flavor present. There is a little bit of coffee flavors present in this third as well, and it has a great finish with each draw. The burn line is still razor sharp in this third, and the cigar remains at that solid medium body level producing a nice amount of thin smoke.

When I come to the final third and conclusion of this cigar, it is still performing wonderfully and as enjoyable as it had begun. That coconut milk flavor profile seems to remain all the way to the end, and it is being paired with this café mocha flavor. The natural sweet wood taste is still present, and it has a lovely finish of leather, white pepper and Asian spices. The lancero burned perfectly even throughout this third, and all the way down to the nub. On the last draw the cigar was cool and flavorful, and I was burning my fingers thoroughly. The strength of the cigar remained at that solid medium level all the way to the end, and for some reason when I closed my eyes I pictured I was back in the Caribbean at one of my favorite islands.

I really enjoyed this lancero, and I would love to see what this cigar would be like with the original wrapper choice for this line. I haven’t smoked any of the cigars back to back with the different wrappers, but I imagine with the Ecuadorian wrapper the flavor profile will be slightly richer in its flavor profile. The lancero was very well made and showed some nice flavor profiles while burning wonderfully from beginning to end. I found the strength to remain at a solid medium body level throughout, and perfect any time of the day. If you are fan of lancero vitolas then this is a cigar I think you would definitely enjoy, and the brand is truly boutique and great. I have become a rapid fan of the EloGio brand, and if you have not smoked any of their cigars you really need to. I give this lancero a 91 and will definitely stock up on them for future enjoyment.