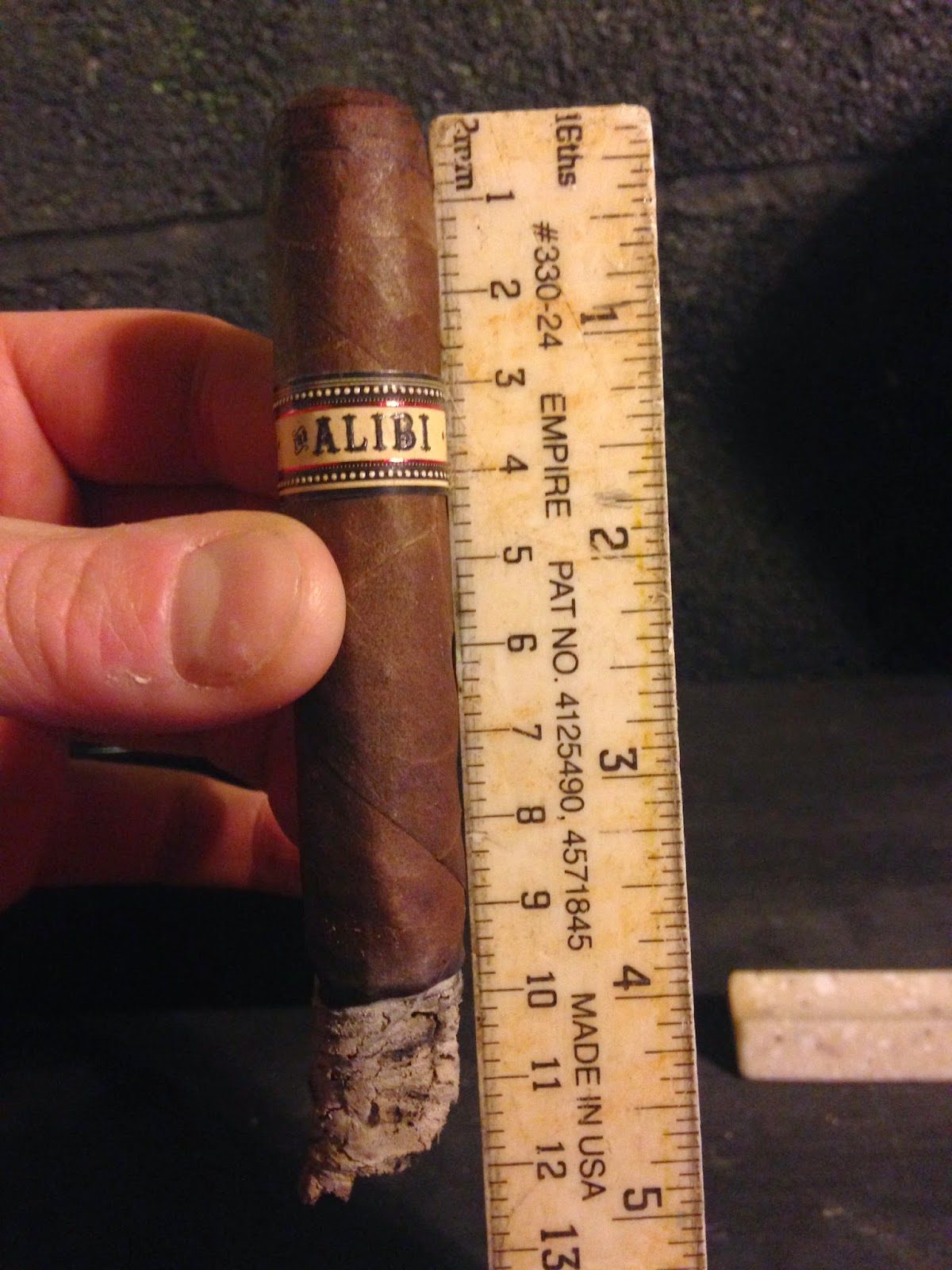 In writing the introduction to this piece, I am trying to think of the manufacturers and brand owners that have lounges named after their company in retail locations. It is not as many as you would think, and the list is typically limited to those who are manufacturers or brand owners who have a very close relationship with that particular retailer. I am not fully aware of the inner workings of these partnerships, I have some idea, but it is definitely a benefit to both the retailer and brand owner. No matter the benefits for the manufacturer/brand owner and retailer, the reasoning behind working together to create a lounge is because of the friendship that is in place between the two, and the respect that each have for one another. I think Espinosa Premium Cigars is probably the most boutique of the manufacturing companies to have multiple cigar lounges with their names on it, and it goes to show to the level of respect they have from the retailers in which they work with. To honor these retailers, Espinosa created its first lounge exclusive cigar, The Alibi.
Measuring 6″ with a 48 ring gauge, The Alibi is a unique vitola that is to my liking. It has a ring gauge which I like, I believe the 48 ring gauge shows the perfect balance between the wrapper and the filler tobacco, and with a 6″ length you are getting a nice sized smoke in terms of length. This is what I would like to see in toros today. The cigar features an Ecuadorian Habano Oscuro wrapper, and underneath that is an undisclosed filler and binder blend. The cigar is rolled at La Zona in Esteli, Nicaragua, and it is rolled in the Cuban manner. Total production was capped at 200 boxes for three stores, and the cigars came in boxes of ten. The cigar comes with a lovely wrapper that has a nice chocolate coloring to it, and it is smooth in texture with some very minor grit present. There are minimum veins present throughout the cigar and it has some tooth present with that. I am getting an aroma of rich earth, tobacco, cocoa and spices on the foot, and the wrapper is giving off some leather and tobacco notes. 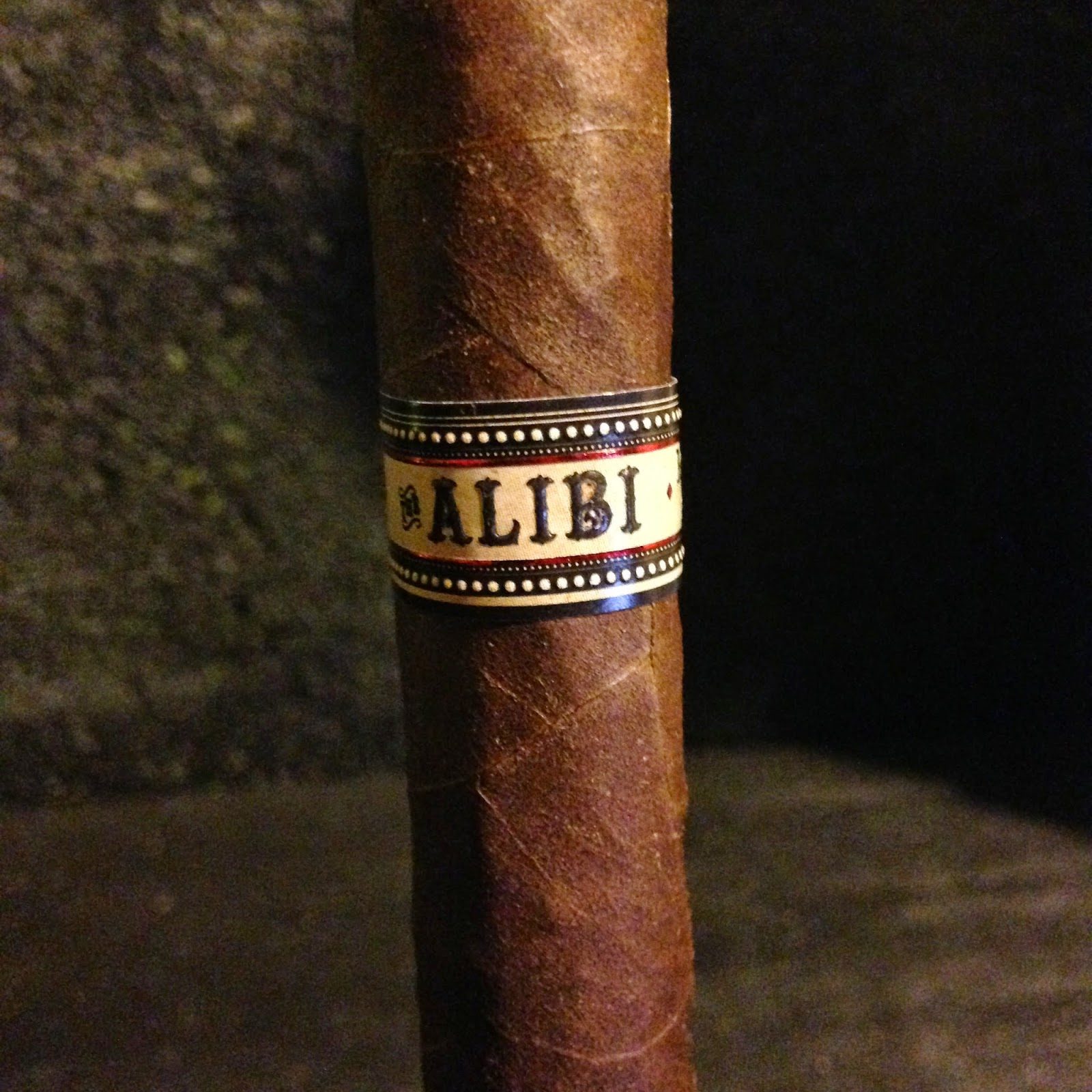 The Alibi begins by showing some lovely spice notes and I am picking up some nice pepper qualities to the cigar. There are touches of leather present as well, and it is completed with this espresso bean, earthy, and cocoa qualities. I am picking up some faint orange peel qualities with that, and it has a nice lemony citrus finish that really completes the blends. It is definitely complex and enjoyable, and you are getting that quality wrapper with the solid filler blends as well. The construction is solid thus far and it is producing a lovely light charcoal ash on the end. The burn line is fairly even and it has a smooth draw that is cool and producing a great bit of smoke. I would classify the cigar as having a strength level around full, maybe medium-full to some, and the body is at a medium-full level. Overall, this is a tasty smoke. 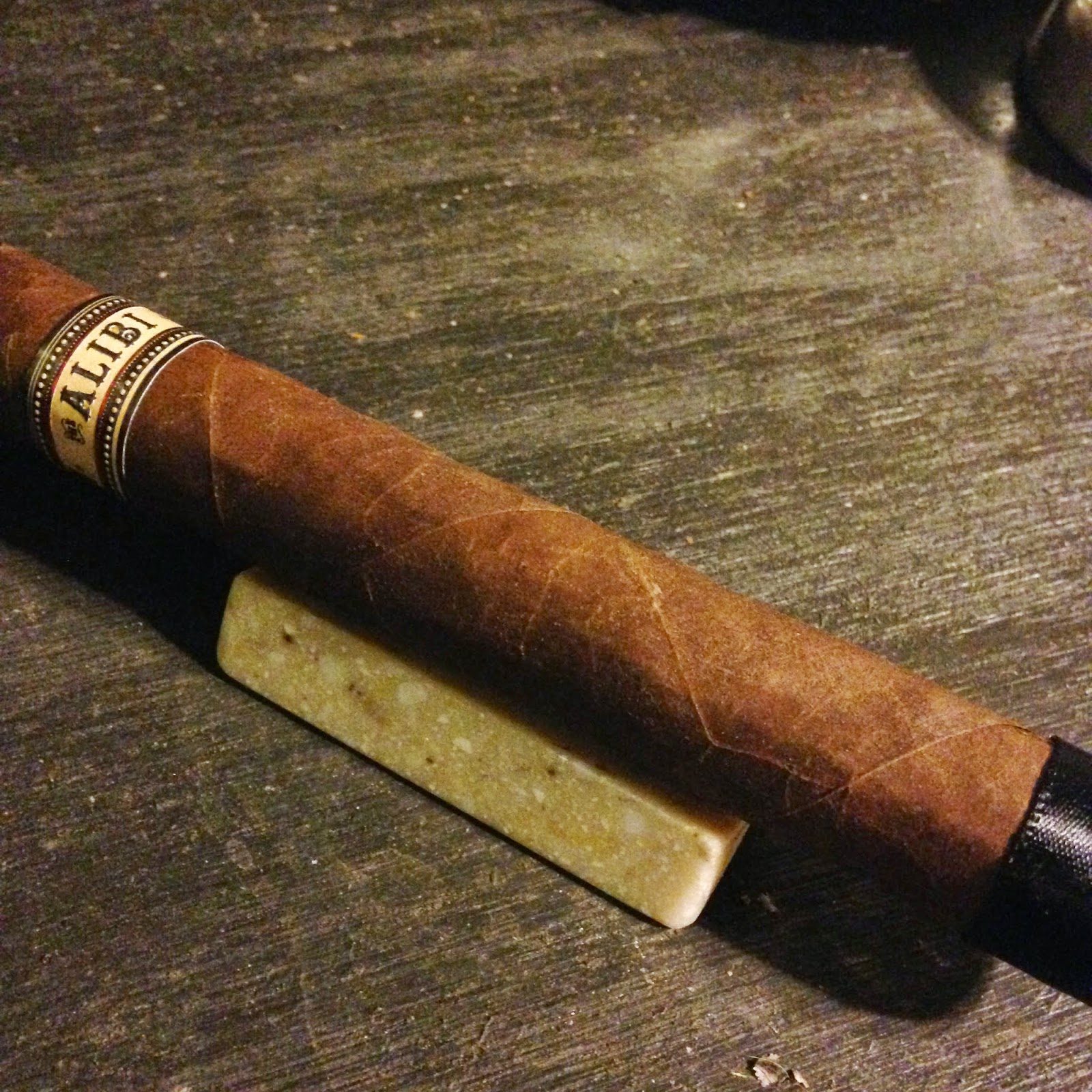 When I get into the second third of the cigar I am getting some nice cream and cocoa notes, and they are pairing with the earthy and spicy qualities that were present from before. I am not picking up as many citrus notes, but it definitely has an earthy and creamy character that is very enjoyable. There are some coffee bean notes present on the finish, and it has some nutty notes with that. It has had a nice level of transitioning, and the flavor profile has remained complex and to my liking. I would say that the strength has dialed back some in this third and it is now smoking at a medium level and the body is right there as well. It is very smooth and overall and I would say it is a flavor focused smoke. The construction is still top notch though and it is showing an even burn line with a lovely charcoal ash on the end. The draw is cool and producing the perfect amount of smoke, and I am looking forward to the final third of the cigar. 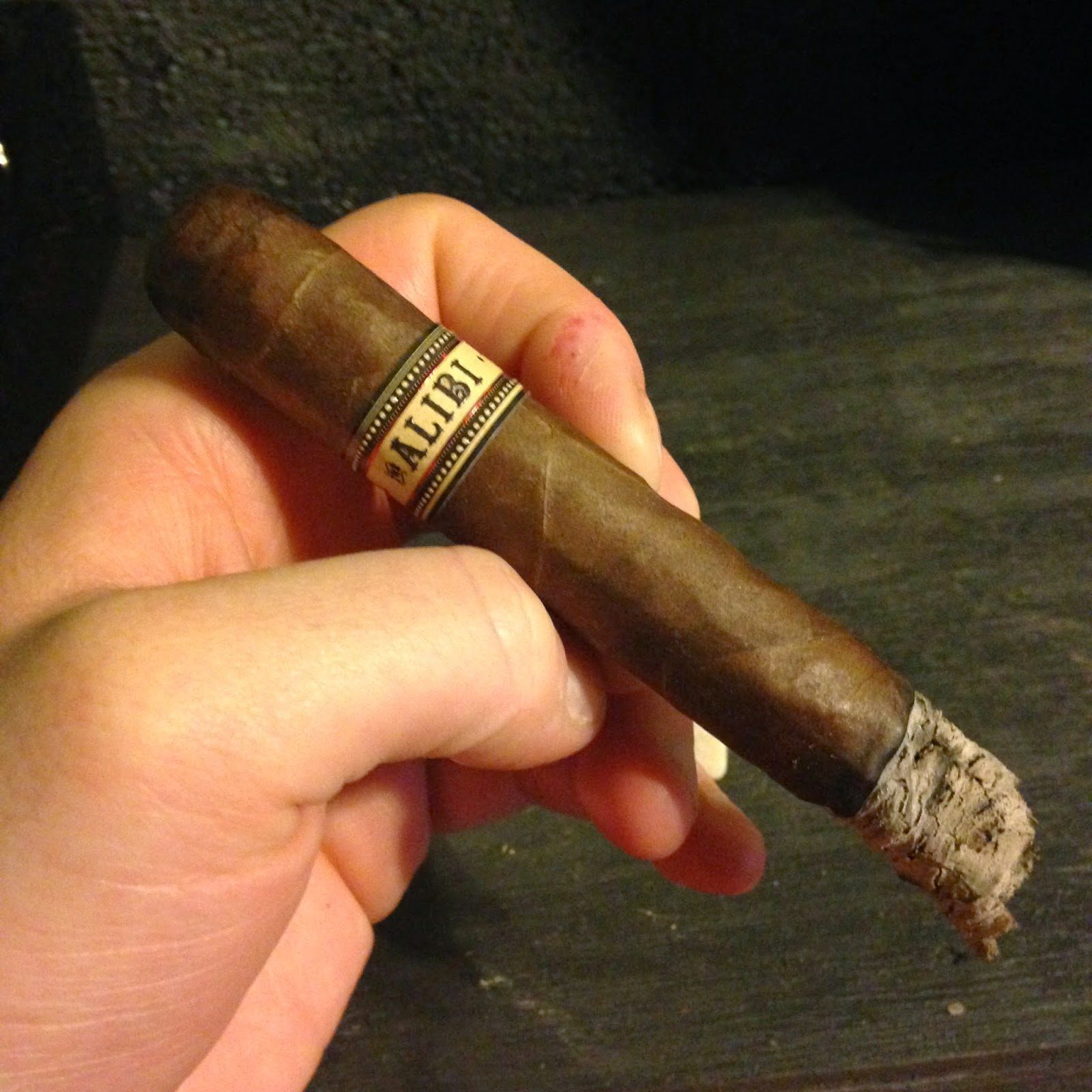 I am in the final third of the cigar now and I am picking up some similar flavors from the second third with some additional notes that were present in the first third. There is a nice earthy, cocoa, and coffee flavor present, and it is accompanied by a creamy citrus flavor that is accompanied by some oak notes on the end. It is a complex and dark flavor profile, and it is a nice way to end the cigar. I found that it started strong with strong flavors, toned down some to some softer flavors, and then increased to some stronger flavors in the final third. The construction remained top notch in the final third of the cigar and it was showing a fairly even burn line with that dark charcoal ash on the end. The draw was still smooth and it was producing a nice bit of smoke on the end. I would classify the final third as being full in strength and body, and this is an enjoyable smoke. 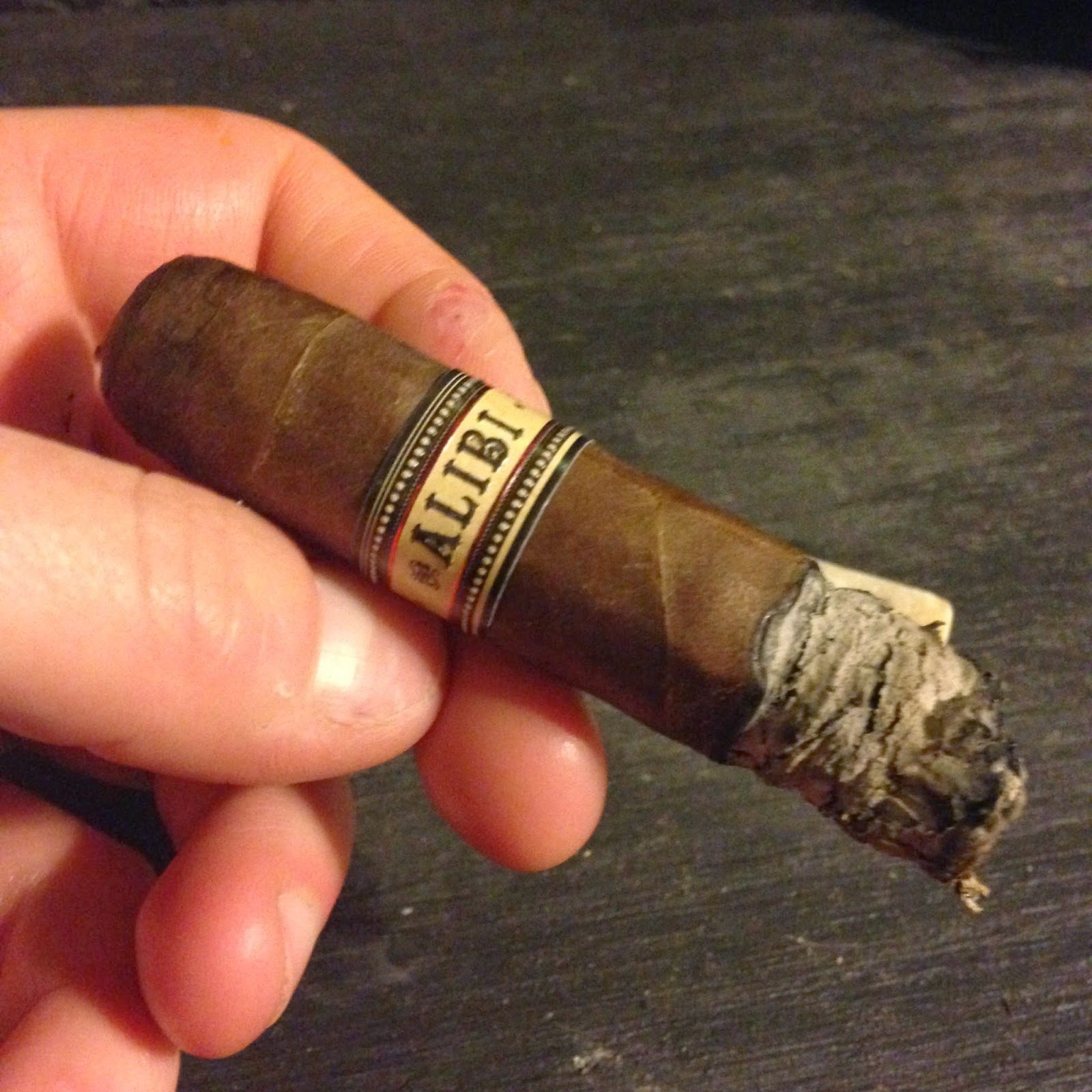 The Alibi is a nice lounge exclusive cigar and one thing I appreciate about the cigar is that it is a unique blend. So many lounge exclusives are merely vitola additions or tweaks in the blend, and the ones that are unique blends are typically disappointing. Hell, even the vitola additions or tweaked blend offerings are disappointing.  I have not smoked all the lounge exclusives out there, but they all fail to deliver something that should be delivered with them being a lounge exclusive cigar. There is an honor that comes with a retailer wanting to have a lounge named after your company, so when that happens you should really create a special cigar. I don’t think you should just throw out a blend or even a vitola addition to your “flagship line,” but rather create a blend that is unique and very enjoyable. I think Espinosa did that with The Alibi, and what I like about the blend is that it is limited and in one size. The Alibi was meant to be smoked in this offering, and the tobacco they used was intended to be used in a limited manner. I look forward to next year’s release and I know Espinosa will not disappoint. These have sold out at Smoke Inn and I can see why. I am giving this cigar a solid 90 rating. 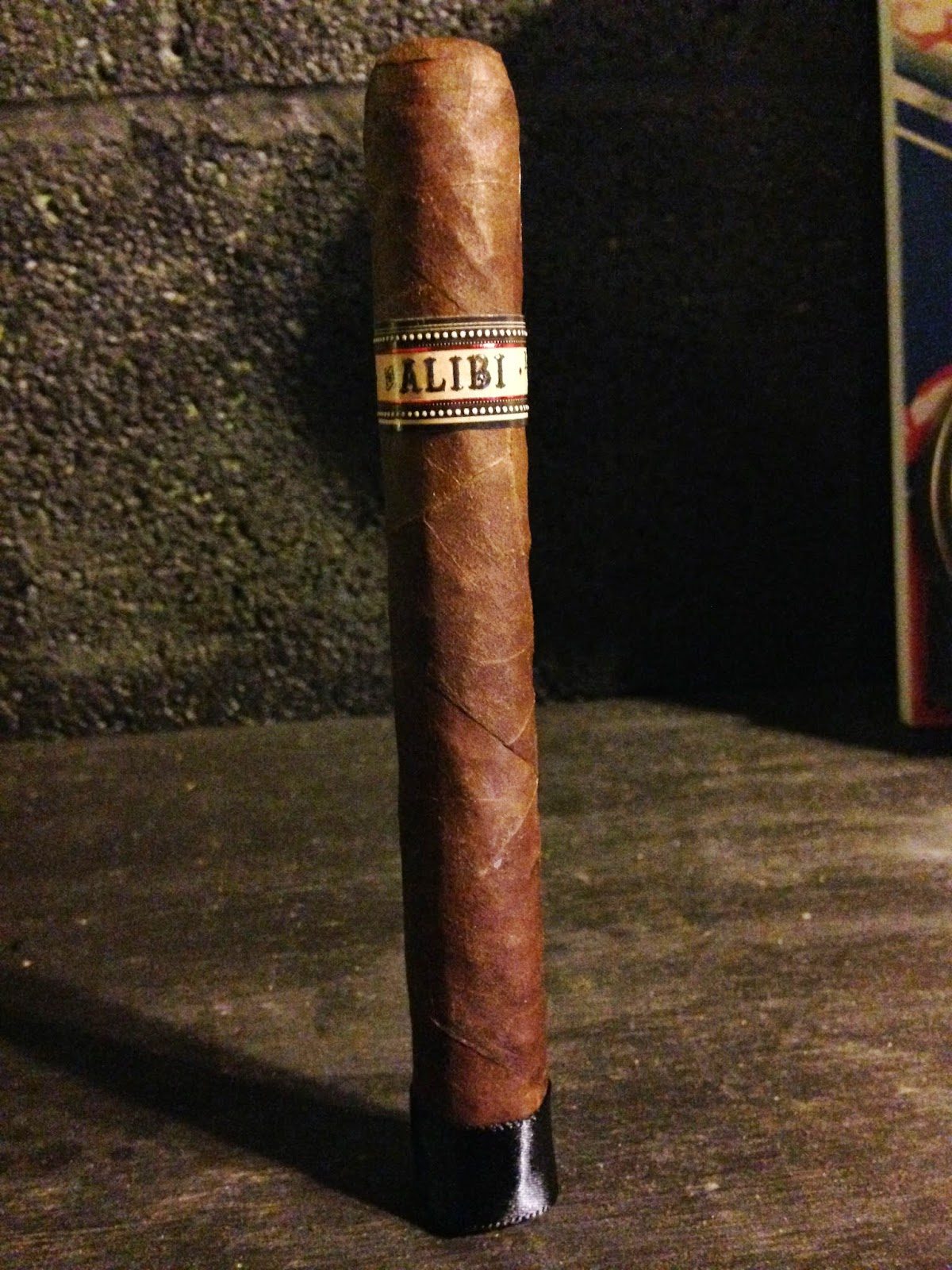