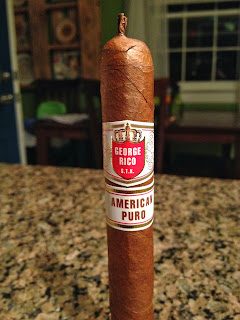 Gran Habano has never been a company that has been afraid to use tobacco from all over Central and South America. The father and son duo, Guillermo and George Rico, have been creating multinational blends for some time now, and for them to use tobacco from one country would simply seem against the norm. The only cigar that I can think of that is a puro is the S.T.K. Zulu Habano, as that was an all Nicaraguan Habano cigar. They are a company that has always used great tobacco from all over, and it is because of this practice that Gran Habano really made a name for themselves. I think everyone who is reading this has smoke the  Corojo #5, and when that cigar was released it was a big deal. Heck, to this day it is still a great cigar. Over the past years though the company has made some changes in terms of business practice and George Rico has begun taking them down the boutique road.

In 2012 George Rico opened G.R. Tabacaleras Co. Cigar Factory & Lounge in Miami’s Little Havana District, and from this factory we have begun to see some boutique projects from the Rico Family. Their newest and possibly most exciting project to come out of the factory has been the S.T.K. Miami American Puro. The cigar is exactly what it is called and is an American puro. Everything that goes into this cigar is from the United States. The cigar is rolled in Miami, the cigar is composed of tobacco from the United States and even the packaging for the cigar is made in the United States. The cigar is available in three vitolas and for this review I chose the Corona Gorda. The cigar measures 5 5/8″ with a 46 ring gauge and is a true corona gorda. The wrapper and binder for this cigar are Connecticut Habano seed, and the filler is a blend of Pennsylvania Broadleaf, Connecticut Broadleaf and Kentucky fire-cured tobacco.The cigar features a wrapper that is toothy and has a lovely Colorado coloring. There are few veins present and it has a nice firmness with a beautiful fan capped finish. The aroma to the cigar has that nice fire cured aroma and I am getting some hickory, oak, mesquite barbecue and leather bits as well. 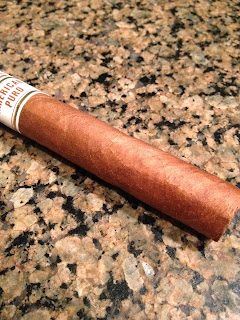 The first third opens up by showing some great flavors that are all over the place. I am getting some definite hickory and oak notes, and it is accompanied by a leather flavor profile as well. Along with that I am getting that smokey quality from the Kentucky tobacco, and it has a nice earthy and coffee flavor present as well. There are bits of black pepper here and there also, and it is a complex cigar that shows a lot of flavors from the different type of tobacco. The construction on the cigar is top notch and I am getting a great draw that produces a nice amount of smoke and an even burn line. The ash is showing a nice charcoal coloring and I am digging this smoke. I would say that the strength of the cigar is at a medium to medium full level and the body is there as well. So far I love this cigar, but I can see some not caring for the flavor profile. 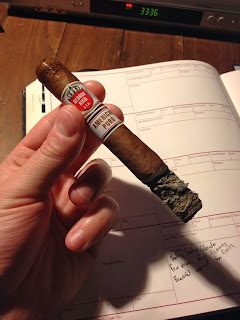 When I get into the second third of the cigar I begin to sea rise in the spice notes and I am getting some solid cinnamon and nutmeg flavors. They are really pairing wonderfully off of the oak, coffee and hickory notes and it is very smooth. The finish shows some of those smoky flavors that were present before, but they are softer than the initial first third. There is a richness throughout as well and I can get that PA and CT Broadleaf. To me the strength and body hit a medium full level in this third and with the smaller ring gauge the smoking experience is magnified and concentrated. I found with the robusto that it was cooler and slightly softer. The construction is still top notch in this third and I am getting that razor sharp burn line with the firm charcoal ash at the end. I will say this one more time, you will love this cigar and what it has to offer, or you will not care for it. It is a one of a king cigar, that is for sure. I am in the final third of the cigar now and in this third I am seeing a change in the flavors one more time. I find that with each third I get more from certain tobaccos and that is the case for this third. I am getting a lot of solid tobacco notes on the front in this third and it is accompanied by some coffee and spice notes. There are a lot more cocoa flavors in this third as well, and it has a woody and rich finish. The body and strength are at a level that is between medium and medium full and this is a complex cigar that really shows balance between flavors and strength. At no point does this cigar get flat or lose the touch that is offering which is what you want to see. The construction in this last third is great, as it has been throughout, and I am getting a razor sharp burn line with that lovely charcoal colored ash. The final draw is cool with a nice bit of flavors and I light up another one right away. 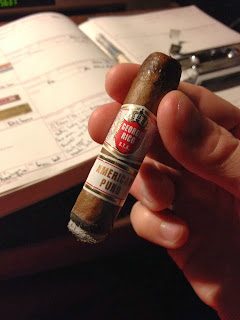 This is an enjoyable cigar, but more importantly it is a great concept. The idea of crafting a cigar in the United States with tobacco that is grown only in the United States is pretty sick. It is not the first American puro, but I can say with comfort that it is my favorite American puro. Along with that, it is the best use of the Kentucky Fire Cured tobacco I have had yet. The cigar showed the great qualities of the Connecticut Habano and Kentucky Fire Cured tobacco, and the two really balanced each other out from beginning to end. I smoked this cigar in the Corona Gorda and Robusto format and both are unique and enjoyable in their own way. For a cigar with more strength I would go with the corona gorda vitola, but if you want something a little bit smoother I would go with the robusto. In terms of construction the cigar is top notch and unique and enjoyable. I would encourage smokers to reach out to this cigar, but I will say that you will love it or hate it. 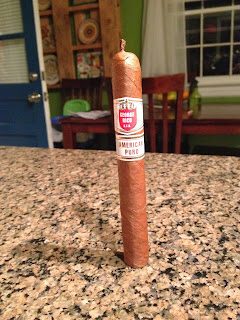