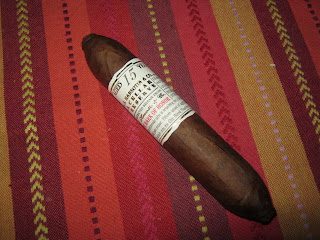 Gurkha Cigars has really released some amazing cigars recently, and I am a big fan of their new cigars they are making. You might remember my reviews of their other new cigars, the Seduction and the  Royal Challenge, and how I rated them so high, and I have heard nothing but great things about this cigar. They have been a company that has strived themselves on making unique cigars that are composed of vintage tobacco, and also tobacco from unique regions. They don’t make tons of cigars for mass production, but several limited lines that are extremely boutique. While the brand has become quite large, I would still argue that they are incredibly boutique because of their methods, and that really makes them enjoyable when they have a new release. One of their newest releases really fits into that pattern of crafting a cigar similar to wine, and that is the Gurkha Cellar Reserve.

Wrapped in a gorgeous Criollo ’98 wrapper from Nicaragua, the cigar is a combination of Nicaraguan and Dominican tobacco. It features a Dominican Olor binder, and the biggest factor in the cigar is the rare and aged tobacco that is all Dominican, and has been aged for 15 years. Gurkha Cigars is known for using rare and vintage tobacco, and that is definitely the case with this old tobacco. The perfecto is very unique in the hand, and I enjoy the pigtail cap that is possesses. The wrapper has a nice marbled brown color to it, very chocolaty, and also very firm and oily to the touch. It has wonderful aromas of cocoa, wood, earth and spices, and it is very comforting. The vitola I smoked was called the Cellar Reserve Solara Double Robusto, and it was a perfecto measuring 5” with a 58 ring gauge.

The unique perfecto begins wonderfully, and like any extended foot, I am greeted first by predominately wrapper flavors. The flavors really begin by showing some lovely spice notes, and then as I slowly move forward into the cigar I begin to get a lot of flavors from the aged filler tobacco. There is a nice presence of leather and earth in terms of flavor, and I am also picking up some wood and cocoa notes. Towards the end of the first third I begin to pick some slight natural cherry notes, and they are paired with this tobacco and spice flavor profile that leaves a nice finish. The cigar is burning slightly wavy, nothing major though, and leaving a solid gray ash on the cigar. I would say the strength of the cigar is at a solid medium, and really enjoyable.

When I get into the second third of the cigar I really begin to pick up a lot more flavors from the cigar, and I have definitely gotten to the sweet spot. The strength of the cigar has remained at that solid medium level, but that is fine for me, and it is definitely a cigar I could start or end the day with. The flavors of cocoa, wood, leather and earth are still present, but I am also picking up these toasty and nutty qualities to the cigar which were not present before. It still has that finish of cherry, spice and tobacco, and it is a very enjoyable and unique cigar. For the most part I am not a fan of cigar shaped like this, but I am really enjoying this smoke. The cigar really burned well in this third, and it kept that nice solid ash as well.

When I get into the final third of the cigar I find that it is ending very similar to that of the second third, and it is almost as if the sweet spot has continued through the final third. Those toasty and nutty notes are more prominent now than they were before, and they are offering a nice balance to those rich earth, cocoa and leather notes. The finish is still that spicy cherry and tobacco flavor and it is a smooth finish that remains on your palate for some time. I find that the cigar has slightly decreased in strength towards the end, but it is offering a smooth and cool finish which is perfect with a cigar. I am a big believer in the fact that I don’t care about the strength of the cigar as long as it is flavorful. The burn line remained slightly wavy to the end, and on the last draw it was still cool and flavorful.

This was really a delightful cigar, and I think Gurkha has been releasing some really great cigars recently. In all honesty their last three releases have been fantastic. I have always enjoyed cigars by Gurkha mostly because of the rare and unique tobacco they use, but their blends have really gotten a whole lot better. These cigars are very complex, not one dimensional, and possess the qualities you want in a cigar. I would be interested to try this cigar in a more conventional vitola, but this cigar still was enjoyable. I give this cigar between an 89 and 90. I imagine I would prefer a standard vitola to this size, and probably give it higher, but in terms of flavor it was a very enjoyable and unique cigar. The fact that it is a cigar that possesses 15 year old tobacco interests me, and I will be smoking these for some time.