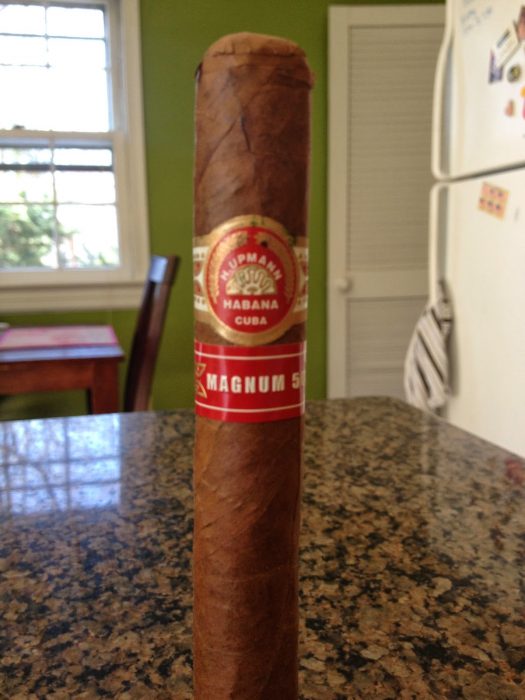 When I first started smoking Habanos I found myself gravitating towards Montecristo and Partagas. They are two of the most well known brands and they produce some quality cigars for all occasions. Like some of the more seasoned smokers I began to reach out for a lot of other brands. I left the Global Market Brand and began to get into the Local Brands. Over the course of a couple years I found myself smoking brands from all the categories and found a favorite in each level. I would say Juan Lopez is my favorite Local Brand, Bolívar my favorite Multi-Local and H. Upmann my favorite Global. Yes, I skipped the Niche Brands but the reason for that is understandable. I could give my reasons for quite a while but I want to focus on the H. Upmann brand and why this is a brand that has become my favorite over the years. This is a brand that has a classic flavor profile that is incredibly complex and enjoyable, and the brand is offered in a wide variety of vitolas making it a brand that can reach out to a lot of smokers.

In 2005 Habanos S.A. announced that the H. Upmann brand would be having its first limitada. That cigar would be the Magnum 50 and this would be a new vitola offering that was never used before. The cigar would be classified as a Double Robusto and measures 160 mm (6.3″) with a 50 ring gauge. The vitola itself is basically an American Toro and some would say it is the “modern day robusto.” To no surprise the cigar was a hit and became a regular production cigar in 2008. I imagine it is one of the more popular vitolas in the brand, though I have not seen the numbers, and it probably outsells the Magnum 46, No. 2 and Sir Winston. This Habano is composed of tobacco from the Vuelta Abajo region and is a massive Habano at that. It features a beautiful triple cap and a wrapper that is light Colorado in coloring. There are some veins throughout and it is firm to touch. There is an aroma of barnyard, coffee, cocoa and spices at the foot, and I am getting some wood and hay notes on the wrapper. 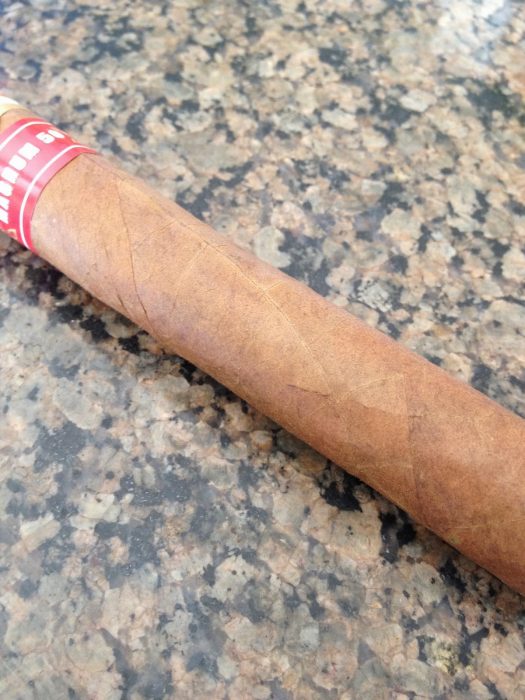 The first third opens up by showing some solid tobacco, coffee bean and leather notes. There are some spice notes present with that but overall it is a smooth cigar that focuses on some classic flavors. I am picking up some barnyard qualities as well, and it is showing wood and hay notes there. Overall, a classic H. Upmann flavor profile that you see in a larger ring gauge. The construction is fairly good overall, one area that is off, but the rest is showing a nice burn line with a lovely charcoal ash along with that. There is a terrific draw to the cigar and it is producing a lot of smoke with the cool draws. I would say that it is smoking at a solid medium level for strength and the body is there as well. This cigar has some age on it so it is not as powerful as they are when they are young, but it is more elegant with that. 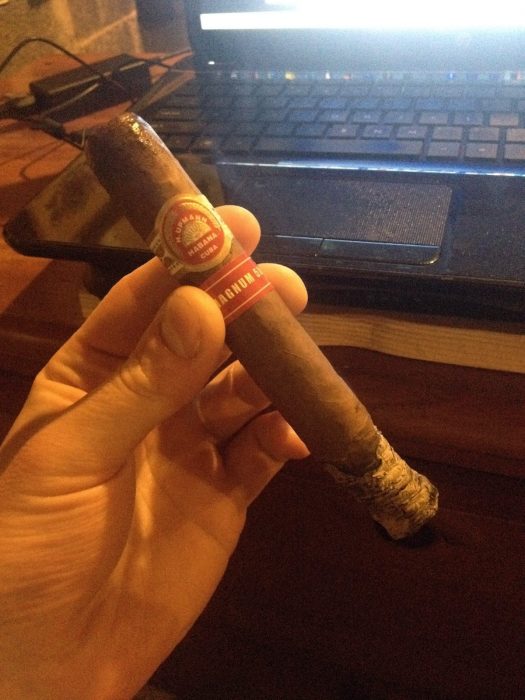 When I get into the second third of the cigar it is showing some of those classic H. Upmann flavors, but I am getting some faint dark chocolate notes. They are not that powerful but they are present and adding a nice bit of complexity and depth. I am still getting those classic coffee bean, leather and tobacco notes to the cigar, and it is showing a lovely barnyard and Asian spice finish. The construction on this cigar is spectacular and it has razor sharp burn line in this third with a draw that is open and producing a nice bit of smoke. The ash has this lovely charcoal coloring and it is holding on firmly to the cigar. The ash is slightly flaky but overall it is not bad and producing a weak ash. I would classify the cigar in this third as being medium body and the strength is right there as well. This is a balanced cigar that is a large H. Upmann and very flavorful. 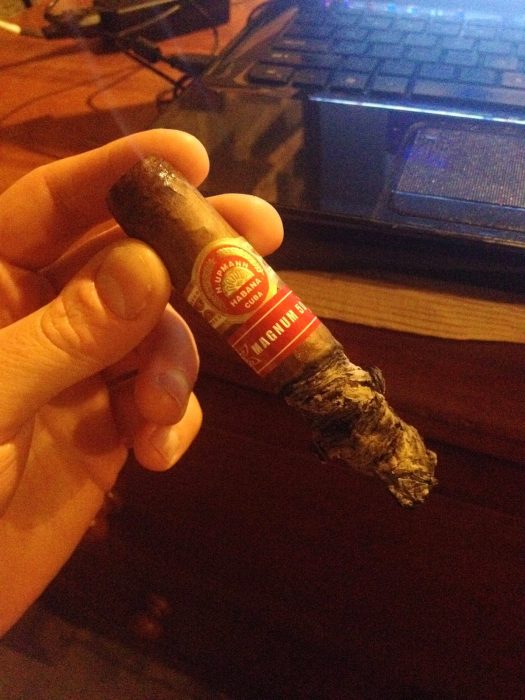 I am in the final third and I am seeing a rise in some soft dark chocolate notes. They are pairing with those coffee notes that have been present throughout and they are making a great pairing. It is accompanied by some solid tobacco, wood and hay notes and this is a wonderful finish to the cigar. There are still no spice or pepper notes present, and it is a complex and balanced cigar. The draw is still very cool to the cigar and it is producing a nice bit of smoke with the draw. I am finding that the burn line has been perfect in the final two thirds and it showing a razor sharp bun line with a flaky and dark charcoal ash holding on. The cigar is still burning and smoking at a medium body level and I would say the strength is right there as well. It is a hard cigar to put down, so tasty, but I put it down at the nub still smoking cool. 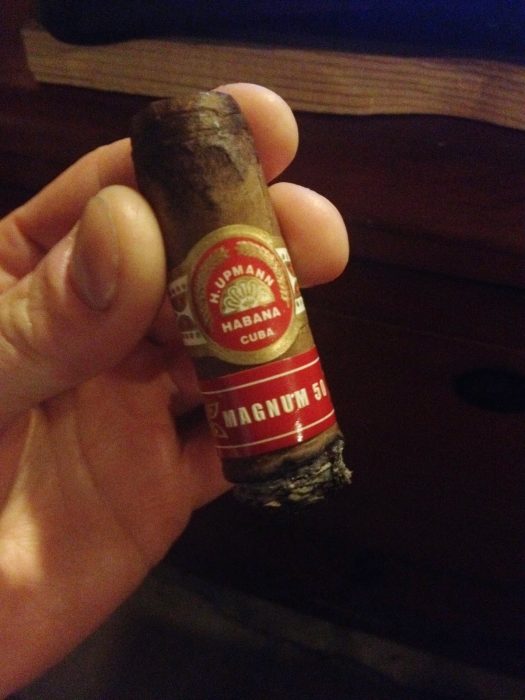 I am a huge fan of the H. Upmann brand, I will not deny that, but the Magnum 50  is not my favorite vitola for the brand. I am not a fan of the size and prefer the cigar in a smaller ring gauge. It is hard to beat the Sir Winston or Magnum 46 and if I am going to smoke a larger ring gauge cigar I would go for the No. 2. Looking at those vitolas and the vitolas in the Habanos portfolio, I still think the Magnum 50 is a great smoke and one of the better releases. The cigar shows excellent construction from beginning to end and it has a nice bit of complexity to the flavor profile. I would not say it shows a drastic amount of transitioning in terms of flavors, but there are some complexities for the larger ring gauge. I can see why this cigar was released and made into a regular production cigar, people are looking for larger ring gauge cigars, but I just don’t think it compares with a lot of the other smokes. 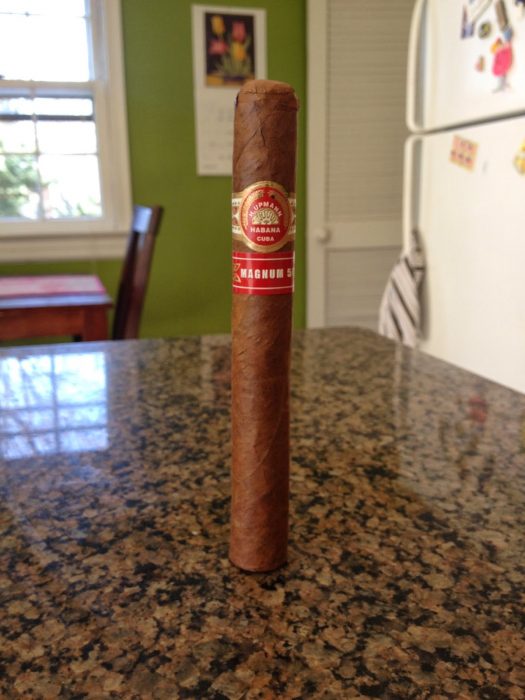