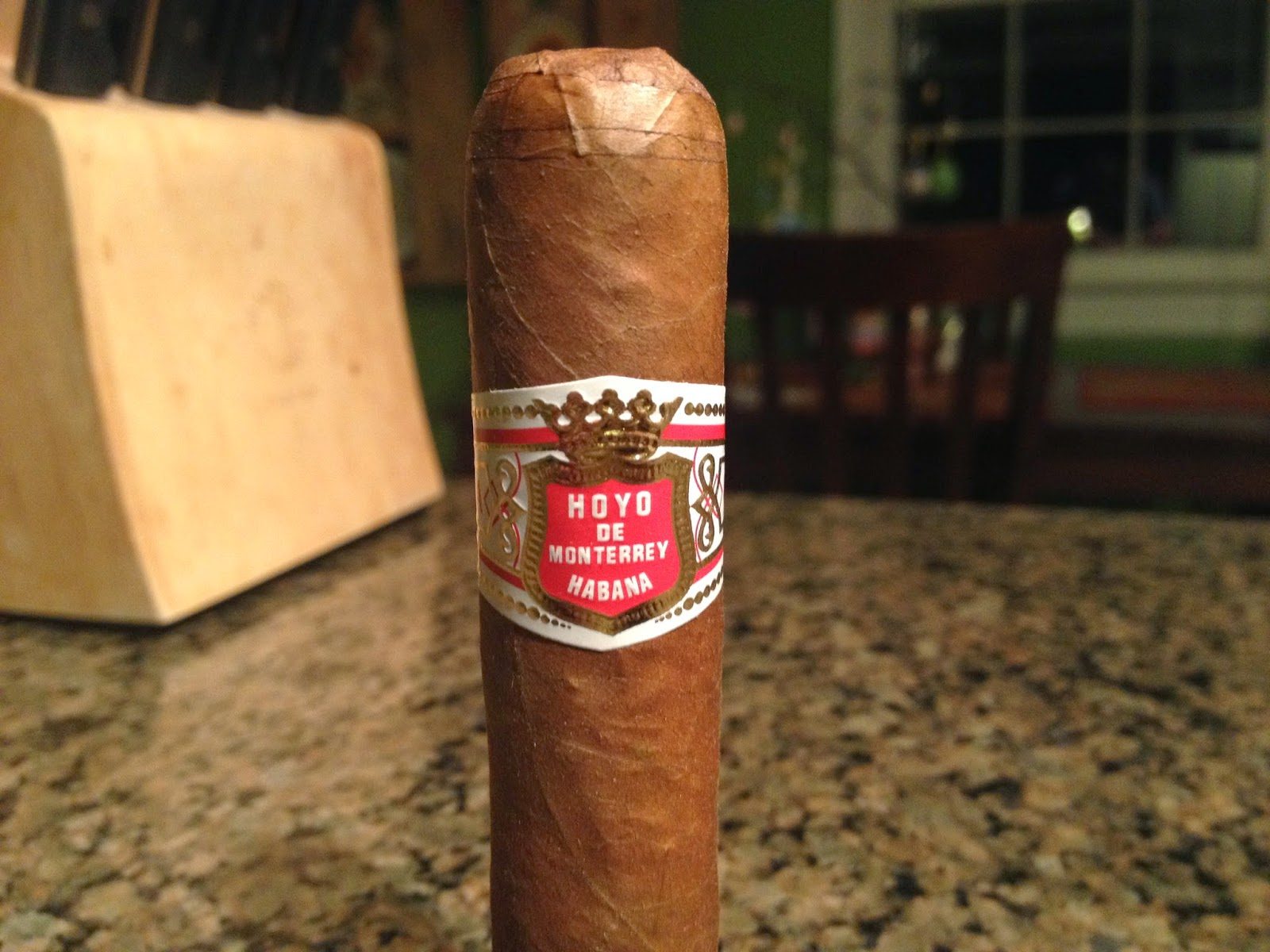 Is anyone else wondering why Big Tuna is the first to review a Habano from the Hoyo de Monterrey brand? I sure as hell am! Yes, I am a little drunk, but I think that is the only way to actually introduce any of my reviews. Today I am talking about the Hoyo de Monterrey brand and it is a brand that has not gotten a lot of love from me over the years. Trying to find these in my Habanos humidor would be rather difficult, and the ones I do have are the ones I often hand out to those who want to smoke a true Habano but are not a serious cigar smoker. I feel that the brand is too light for a smoker like myself, and while they produce some enjoyable flavors, they are not always meant for me. With that being said, there are some vitolas in the brand that are stronger than your standard Hoyo and are aimed for the smoker that prefers a little more body and strength. Today I will be looking at the Petit Robustos for the Hoyo brand, and it is a vitola that has been on the market since 2004. Hoyo de Monterrey is a brand that has been on the market for years, pre-Revolution, and it is a well known Global Brand.

As I said earlier, the Petit Robustos is fairly new to the market and is the second youngest Hoyo vitola. It is actually celebrating its tenth anniversary so it seems fitting that I smoke it and review it. You may ask how ten years can be “new” to the market, but the truth is that Cuba has brands that have been around for so long that ten years is really nothing. Like all vitolas in the Hoyo de Monterrey brand, the Habano is composed of tobacco from Vuelta Abajo and is made in Habana, Cuba. The Habano measures 102 mm (4″) with a 50 ring gauge, and production is mostly coming out of La Corona. It is classified as a petit robusto, and it actually is with a shorter length and a 50 ring gauge. The Habano has a beautiful triple cap and the wrapper itself has a Colorado coloring and is oily and beautiful in appearance and texture. The band really pops off the cigar and it really captures that wonderful Hoyo quality. The wrapper gives off a wonderful aroma of hay, sweet tobacco, cedar, stone fruit and it is on the foot that I pick up some raisin qualities with those terrific wrapper flavors. 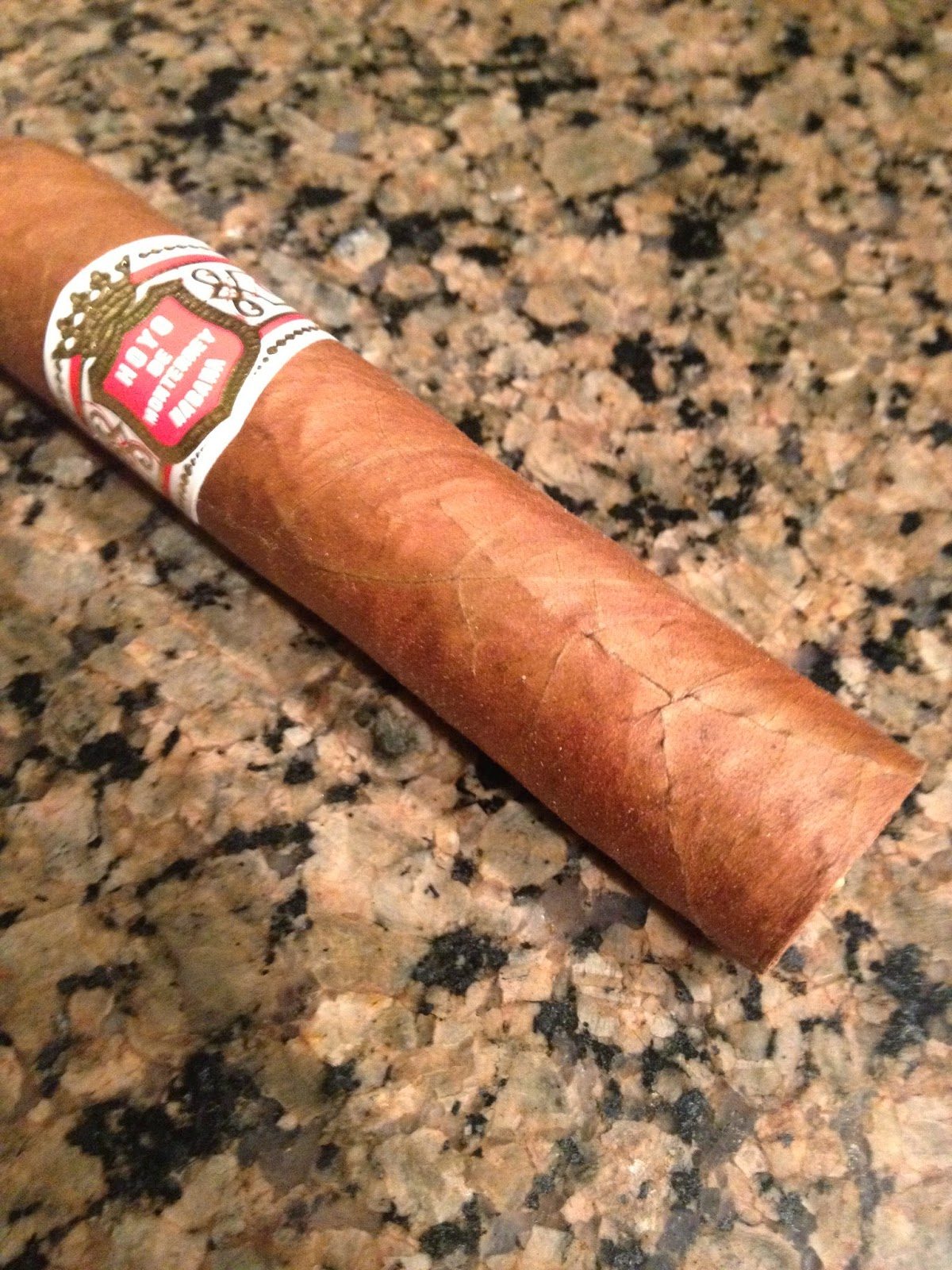 The Hoyo brand has such a diverse portfolio that you can pick up a vitola that is ranging from light to full. This Petit Robusto is far from being light. From the get go the Habano shows some noticeable wood and leather notes and it has some spicy pepper qualities with that. There are some bits of hay and sweet cedar notes on the finish, and this is a smoke that is terrific in the afternoon or evening. I would classify this particular smoke as the first Habano of the afternoon, and I would light it up around lunchtime. The strength of the Habano is right around medium full and the body is right there as well. To me it is a great size and a great smoke, something I would put in my daily rotation. The construction is terrific throughout the half and it is showing an even burn line, a beautiful charcoal ash that is holding on firmly and a terrific amount of smoke. So far, I am thoroughly impressed with that it is offering. 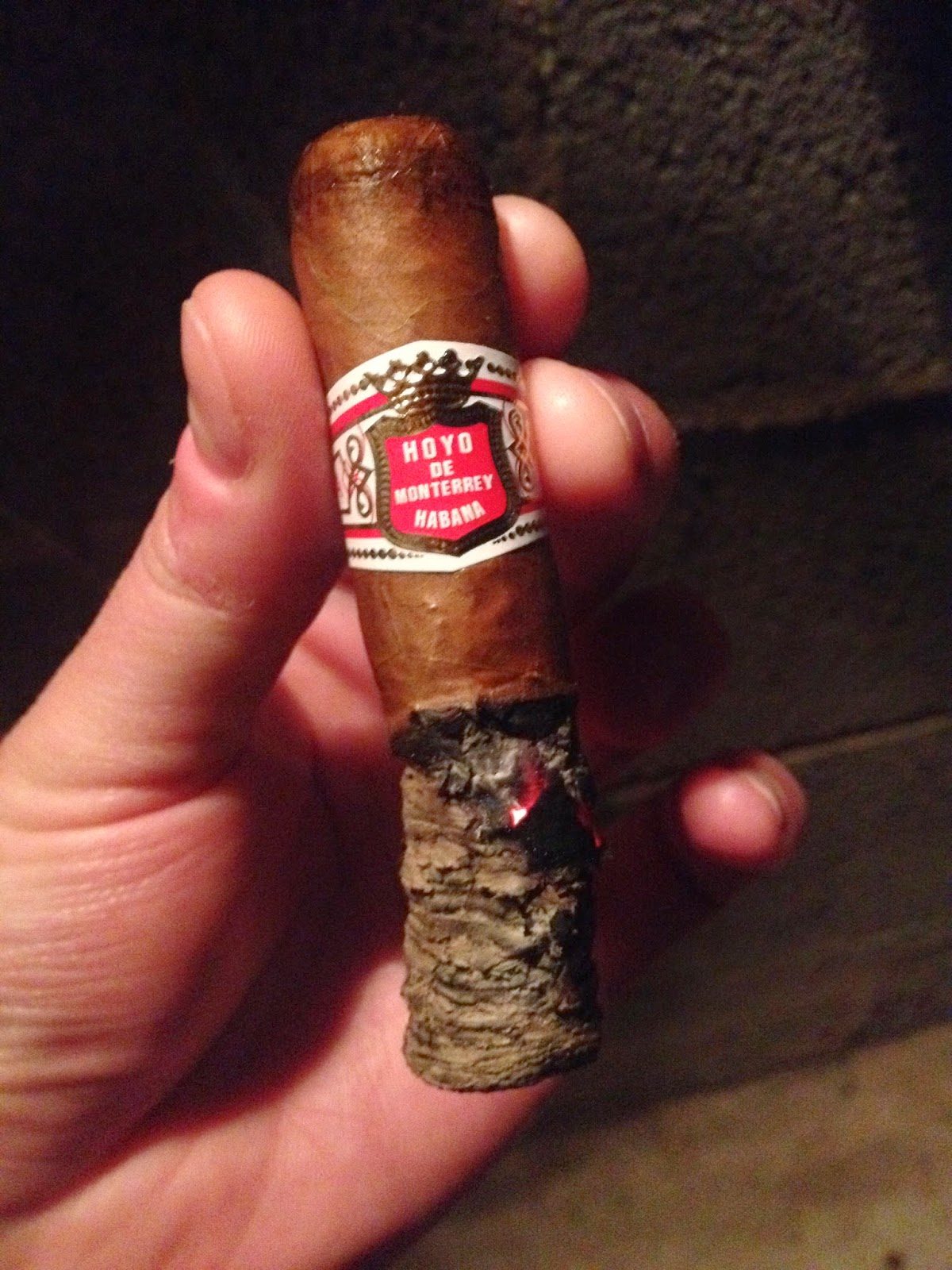 When I get into the second half of the cigar I find that it is showing some major transitioning and it is smoking like no other Hoyo. Yes, the cigar is young, but this goes to show that Catfish and I are correct and that there are certain brands which show a variety of offerings. The Habano is producing some strong and dark flavors and I am getting some coffee beans, leather and oak. There are some subtle hay notes to the smoke as well and the finish is that of soft pepper notes. I would say that it finishes between medium full in full in terms of body and the strength is right at that medium full level. The construction remains perfect in this half and it continues to show an even burn line with a nice charcoal gray ash that is holding on firmly to the end. The smoke being produced is the right amount and the final draw to the Habano is slightly cool with those dark flavors. 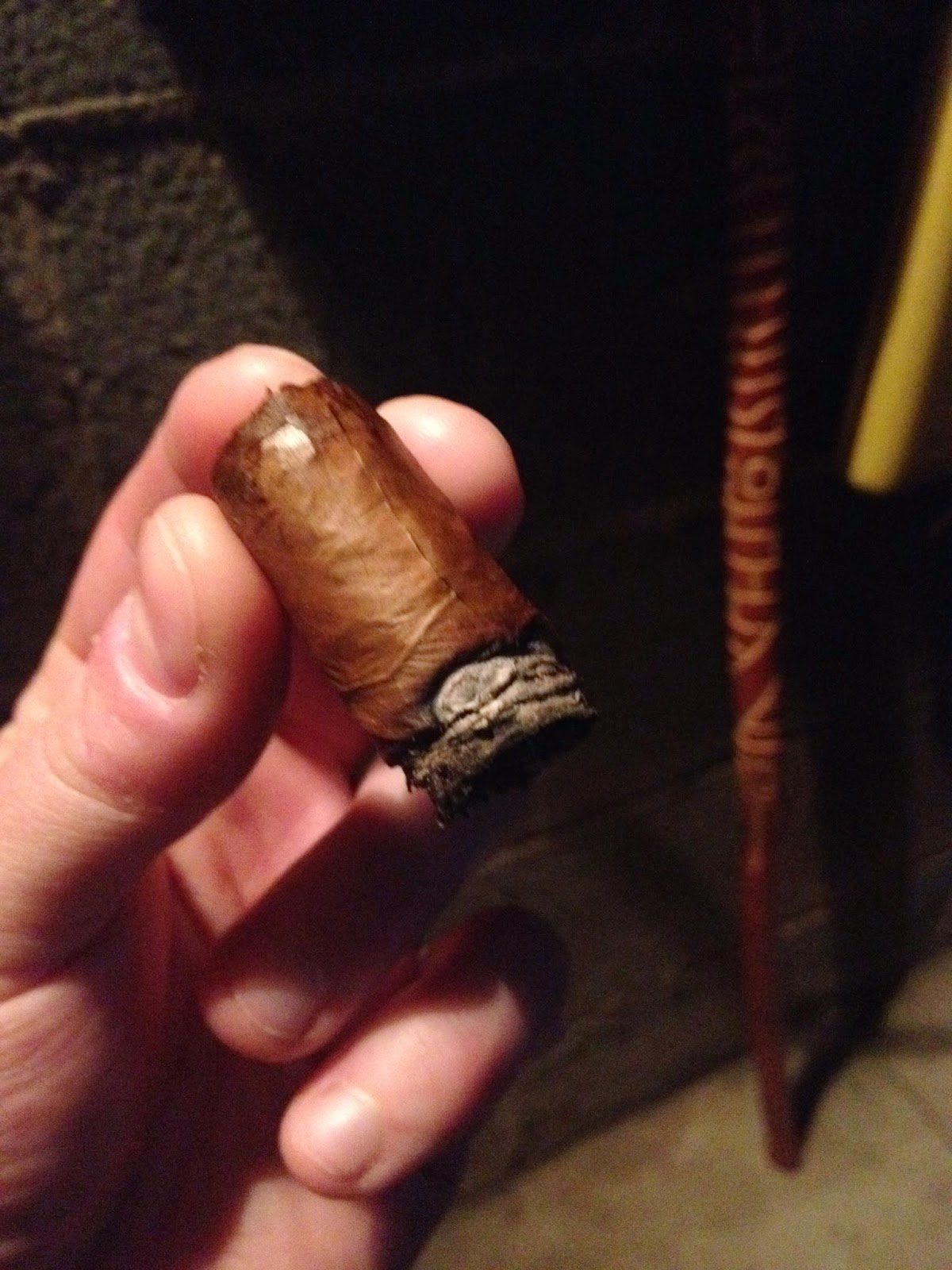 The Hoyo de Monterrey brand is a massive brand that is filled with a wide variety of vitolas. Along with a massive selection of vitolas to chose from, there is a difference in body and strength with all of them. Some of them are noticeably light and flavorful, but there are some that are fuller and producing a flavor profile that is just as flavorful, but very different. The Petit Robusto is a terrific vitola, there is no doubt about that, but I wonder what the Habano would be like if it were produced in a way that was more along the lines of the traditional and well known Hoyo qualities. The Petit Robusto shows a lot of flavors throughout, pepper, wood and hay notes, but it was stronger than I was expecting and hoping for. I should have know by looking at the wrapper of the smoke but you never can tell. With that being said, I really enjoyed the smoke, I think it will age wonderfully, and recommend it to a more seasoned smokers out there. I am giving this a 86-88 right now and look forward to seeing it in a couple of years. 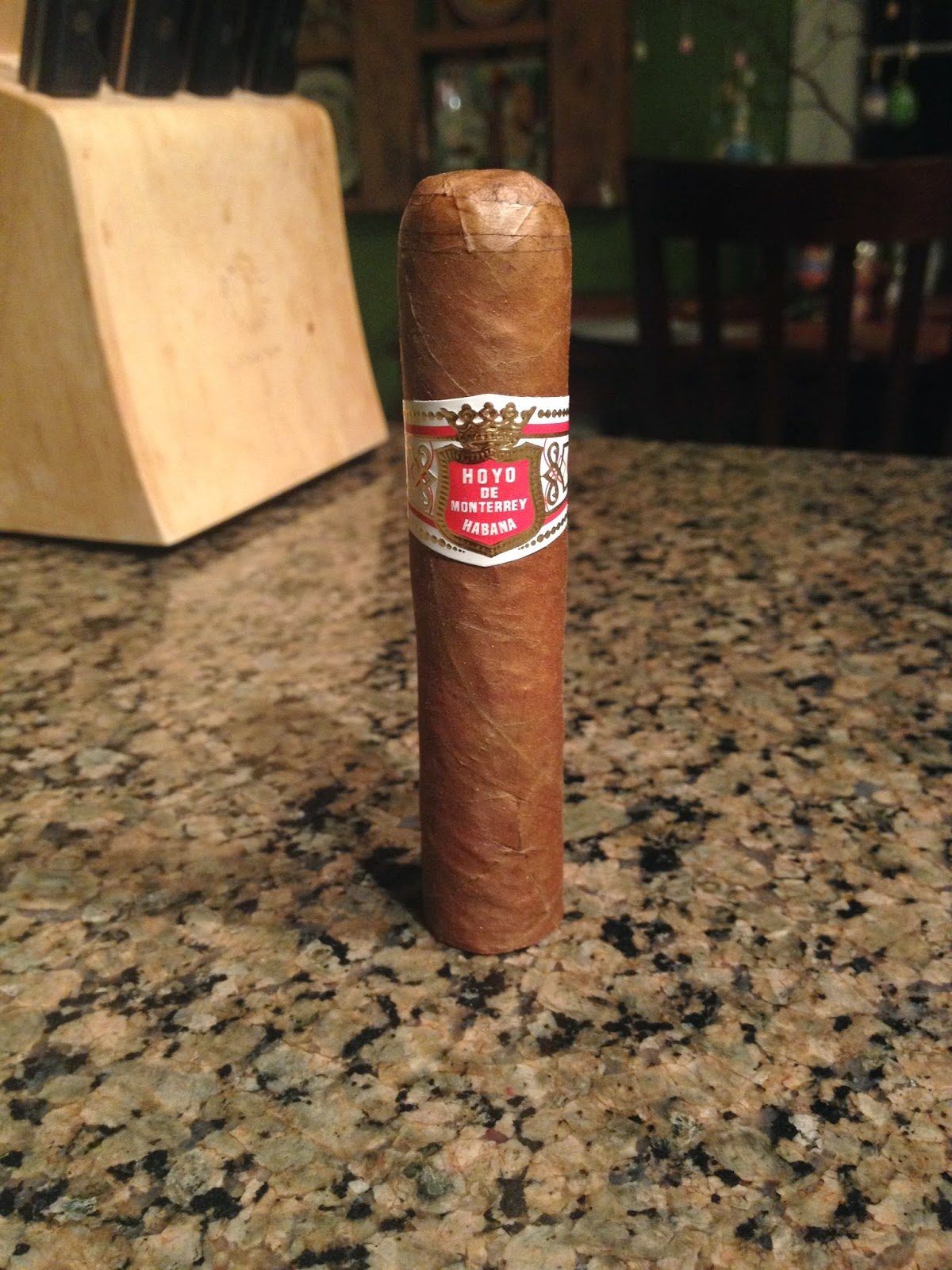