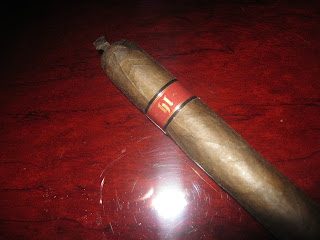 In October of 312 AD at the Battle of Milvian Bridge it was said that Constantine I saw a vision of the Christian Cross in the sun, and from that moment he took on Christianity as his own religion, and established a tolerance of Christianity in his Roman Empire. From then on it was said that Constantine contained the Holy Lance that pierced the body of Christ, and that it traveled with his army carried in his personal standards. Whether that story is true or not, the story of the Holy Lance has continued on for many years, and has led to the name of the Lancero vitola in the Illusione brand, the ~hl~. The ~hl~ has always been a great Lancero, and though I do not smoke it often or have many in my humidor, I always find the time to enjoy the smoke. I have found them often to be very light in terms of strength but very enjoyable in terms of flavor, where it really matters. When it was announced that Dion would be making a Maduro line extension to the Illusione line, my thoughts and hopes were that he would make the ~hl~ vitola, and he did.

* I should note that the Lancero cigar was available in a Maduro wrapper before, with the original Illusione band, and it did have a Mexican wrapper, but this is the new Maduro line version with the new band.

Though unpopular, the Lancero size gives the smoker the chance to enjoy a thinner ring gauge, and with that be able to really pick up the flavors from the wrapper. The blending process is fairly difficult for the size because you are trying to make a cigar that is very flavorful, and much smaller in terms of ring gauge. Typically less tobacco is used in cigars like this and Coronas, so you can see the difficulty in the blending. The Lancero size was actually a favorite of Fidel Castro, and that is why the Cohiba and Trinidad brand are the two that encompass it. Since then the size has come to the States, but it has never been as popular as it has internationally. Manufacturers such as Tatuaje, Arturo Fuente, Oliva, Alec Bradley, Casa Fernandez, La Flor Dominicana, and others have made the size, but it has never caught on with a lot of smokers. I enjoy them occasionally, and I find that the original ~hl~ to be one of the best ones I have had.

The Lancero is great in the hands, and it has that fabulous pigtail cap that you typically get with a Lancero. The cigar measures 7.5″ and has a 40 ring gauge. Like all of his cigars coming out of the Raices Cubanas Factory in Honduras, it is rolled in the Cuban fashion and is finished with a triple cap. The filler blend is the same as the traditional Illusione line, as well as the binder, but it is finished with a gorgeous Mexican San Andres wrapper. There are some slight veins present in the cigar, but it is very oily and has a nice light chocolate brown color to it, still definitely Maduro. The aroma of the cigar is that of barnyard, wood, rich earth, cocoa and leather.

The first third of the Lancero begins wonderfully, and it has a slightly tight draw that is perfect for me. The flavors are that of unsweetened cocoa, leather, wood and barnyard. There is a nice spice to the cigar on the finish, and it is showing great flavors with the thin ring gauge. The cigar is burning very well, and the ash is holding on to the cigar sturdily. The color is that of dark charcoal gray and the cigar is producing a thin amount of smoke. In terms of strength I would say the cigar is around medium in body, and very enjoyable.

I am in the second third of the cigar now, and this Lancero is smoking great. I don’t know if I would say this is my favorite vitola in the Illusione Maduro line, but it is definitely great, and really captures the Maduro wrapper. The flavors of barnyard are really at the forefront in this third, and the finish is of spice and wood. There are still some slight notes of sweet cocoa in this third, but overall the barnyard flavors are really present in this third. The burn line is still great in this third, and the ash is still that great dark charcoal color. So far this cigar has been nothing but great, and I am really loving this Lancero and considering it a box worthy cigar.

I am in the final third now, and I do not want this cigar to finish. The flavors of wood, leather and cocoa are phenomenal, and it really has a great finish with each draw. The cigar has not been incredibly complex throughout, it has stayed fairly consistent in terms of the same flavors, but it is really enjoyable. There is a little bit of spice in this third, and as I smoke it down to the nub it is still smoking cool and pleasant. It still is smoking around a medium in terms of strength in the final third, and producing thin smoke that is very aromatic. Not that it matters, but it is not been a great cigar for smoke rings.

This was a very enjoyable cigar, and really a great Lancero. I think you have to have a great wrapper if you are going to make a Lancero cigar, and Dion definitely was able to do that with the Illusione Maduro ~hl~.  I actually think all of his Lancero’s are great, and they are nice to enjoy from time to time to change it up. You really get a lot of great flavors from the Mexican wrapper with this cigar, and it is blended so well that you also get those great flavors from the Nicaraguan fillers and binders. In terms of the Maduro line, I would choose this after the ~888~ and ~mj:12~, but if you enjoy thinner ring gauges this cigar is definitely for you. I give this cigar a 91.