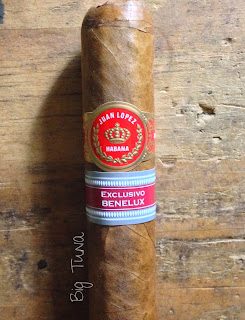 Today I am fortunate enough to review a regional release in one of my favorite brands, Juan López. It is a brand I turn to quite regularly, and it is a brand that comes with great vitola offerings. I smoke Selection No. 1 and No. 2 equally, and the only thing that could make this brand any better would be to add a Dalias or Churchills offering. The brand itself is somewhat popular in terms of receiving regional releases, and you can typically count on one regional release a year. This past year the brand received two regional releases, and they were releases for Portugal and Benelux. Fortunately for me, I have sources in Spain/Portugal and Benelux so I can get my hands on these, because my local LCDH does not have them on shelves. Today I look at the release for Benelux, and this 2014 regional release is the Juan López Don Juan Edición Regional Benelux.
A 2014 regional release that recently made its way into stores, the Don Juan is an Edmundo vitola that measures 135 mm (5.3″) with a 52 ring gauge. It is a robusto in nature and is made of only tobacco from Vuelta Abajo. Total production was capped at 3,000 boxes, and they come in 25 count slid lid boxes. The Don Juan s lovely in appearance and it sports a solid triple cap with the gorgeous, simple, and classic Juan Lopez band. The wrapper has a nice marbled coloring to it and it is showing some veins here and there throughout the cigar. It has a faint amount of oils present and the wrapper is incredibly smooth throughout. I typically find the wrappers of regular production to be lighter, but sometimes they can be darker than this. The foot is giving off an aroma of fruit, spices, barnyard, and hay, and I am getting some more natural hay and wood notes off of the wrapper. 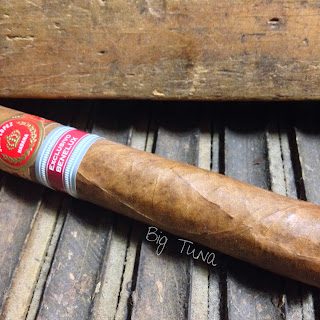 The Habano begins by showing some unique flavors that are not common with Juan Lopez. I am getting a nice fruity flavor with the Habano, and on top of that are some cinnamon and anise notes. There is a nice meaty spice present as well, and it has a finish of coffee beans and earth. There are notes of hay and wood present as well, and it is terrific first third. The construction is absolutely perfect thus far and it is showing a nice charcoal ash that is holding on firmly to the end of the Habano. The draw is cool, producing a lot of smoke, and I am loving the Edmundo size that this brand is offered in. I would classify the Habano as being medium in strength, but it has a medium-full body and is full flavored. So far a terrific opening and it is a Habano that shows tons of aging potential. 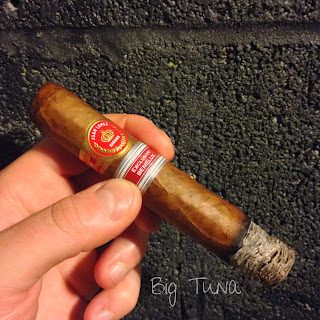 When I get into the second third of the Habano, I find that there is a rise in the spice notes and I am getting more pepper flavors with some touches of anise here and there. There is a nice tobacco flavor profile present and it has a some dry earth and wood qualities present as well. It is showing some rough hay and grass flavors on the finish, and it has had some nice transitioning from the first third. The body and strength are now both at a medium-full level, and the follow the full flavor profile that the Habano is delivering. The construction is fairly solid in this third and while it is not as good as it was in the first third, it is not presenting itself to be a major problem. The ash has that nice dark charcoal coloring and it is showing a cool draw. So far, I think the first third is my favorite, but I am interested to see where the final third takes me. 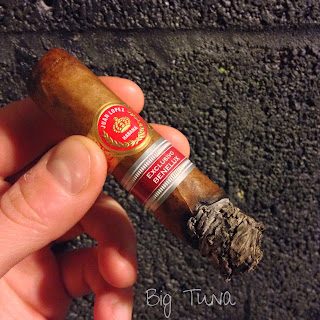 I am in the final third now and it is finishing by showing some classic Juan Lopez flavors and is very enjoyable. I am getting some damp and musty wood flavors and it has some nice hay and tobacco flavors on top of that. There are some nice spice notes showing faints of pepper qualities and it has touches of leather with that. I am getting finishing flavors of black coffee, and it is a smooth and cool finish. I would classify the final third as being medium overall in terms of body and strength and the flavors are still full. The construction remains solid and the burn line improves with a nice draw. There is a great deal of smoke being produced to the nub and that is when the Habano gets fairly soft and I put it down. Overall, a nice bit of transitioning throughout and a solid release for being as young as it is. 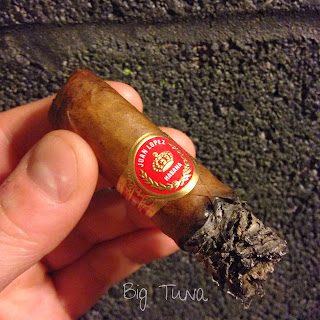 I am a fan of the Don Juan, but then again I am a fan of almost everything that is Juan López. After H. Upmann, I think it is one of the best brands on the market. I have actually never had a regional release for the brand, and that is quite odd as I have loved the vitolas they have offered for the brand and the regular production offerings are simply spectacular. The Don Juan had a nice bit of transitioning and with that was a great bit of complexity. The final third was a slight disappointment, but it is a young Habano and one must recognize where it will be in some years; that is the only way to truly understand a Habanos. Along with some very enjoyable flavors, the construction was solid and the body and strength were lovely as well. Looking at the big picture, I would give this Habano a rating of 87 to 89 right now, but in a couple years this Habano will smoke at a level between 91 and 93.