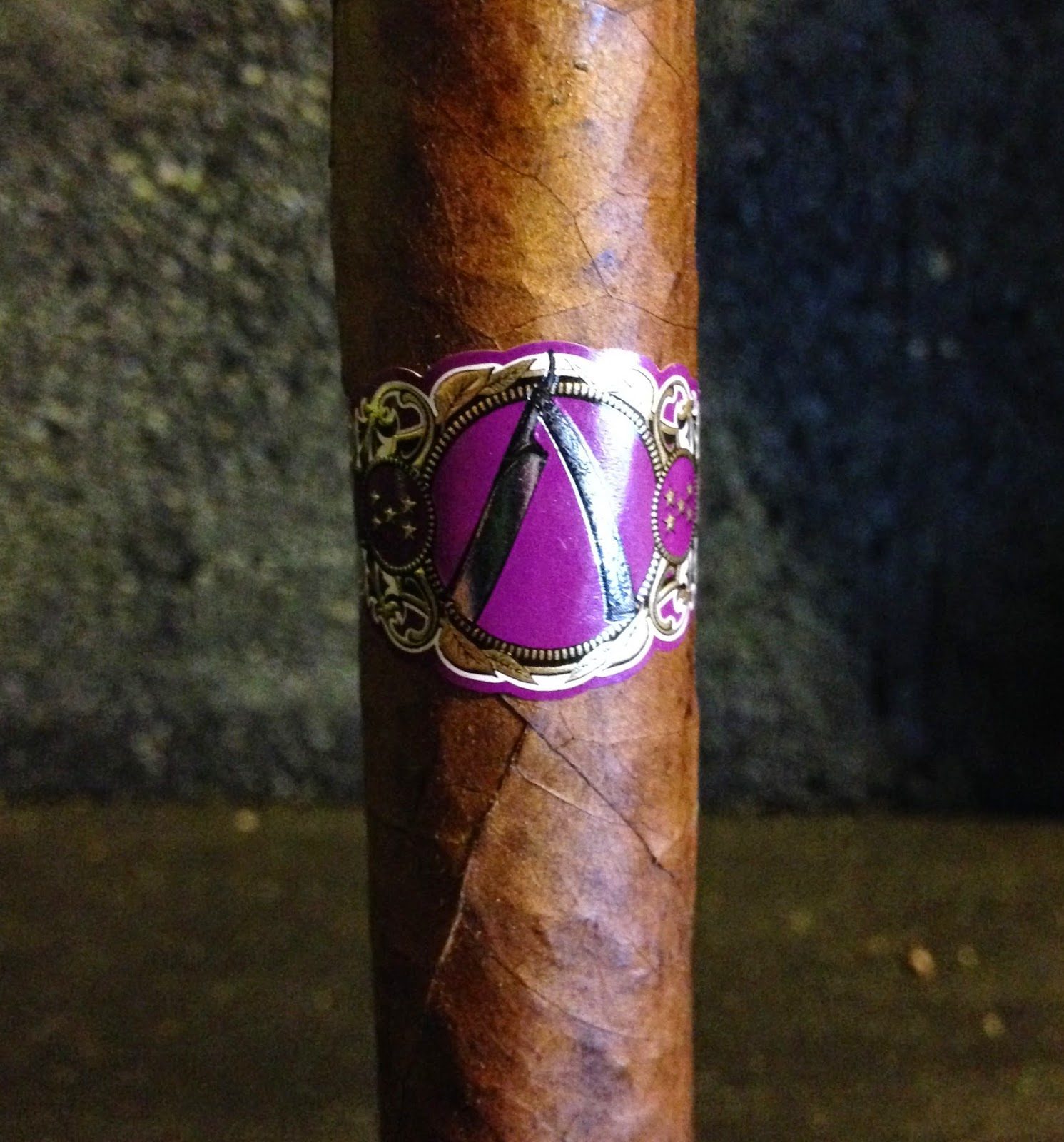 In 2010, two men came together who shared a passion of cigars, wine, and spirits. Those men were Tony Bellatto and Craig Rossi, and both are Ohio natives. They envisioned creating a company that held true to them and their friends, and thus created La Barba Cigars. (La Barba is Spanish for The Beard.) They began by working with a knowledgeable individual in farming and production, Christian Eiroa, and the two launched their first line in 2013, La Barba Red. As to be expected, they created a blend that was heavy Honduran, and it was well received. Eventually, Bellatto and Rossi broke off from their cooperative work with Eiroa and went to the Dominican Republic to work with William and Henderson Ventura. Working alongside Robert Caldwell, who was creating Caldwell Cigar Co., Belatto and Rossi created their second line, La Barba Purple. It was released in the last quarter of 2014, and today I finally get around to smoking and reviewing it.
Crafted at Tabacalera William Ventura in Santiago, Dominican Republic. La Barba Purple is a multi-national blend. The wrapper being used is HVA Ecuadorian Habano and underneath that is a Dominican Corojo binder. The filler is a complex blend, and it is composed of all Dominican tobacco that is Corojo, HVA Habano, and some Criollo ’98 that is grown exclusively for La Barba by the Carbonell Family in Navarette, west of Santiago.  For this review I went with their Toro, and it is a toro that measures 6″ with a 54 ring gauge. The toro is rolled well and it has a lovely cap placed atop of the cigar. The wrapper has a beautiful Colorado coloring to it, and it is fairly silky in texture with minimal veins present throughout. It has a nice firmness and this is a well rolled cigar. The Ventura Family knows how to roll, and this cigar shows just that. There is an aroma of spices, minerals, sweetness and grass on the foot, and the wrapper is showing some leather and wood qualities. 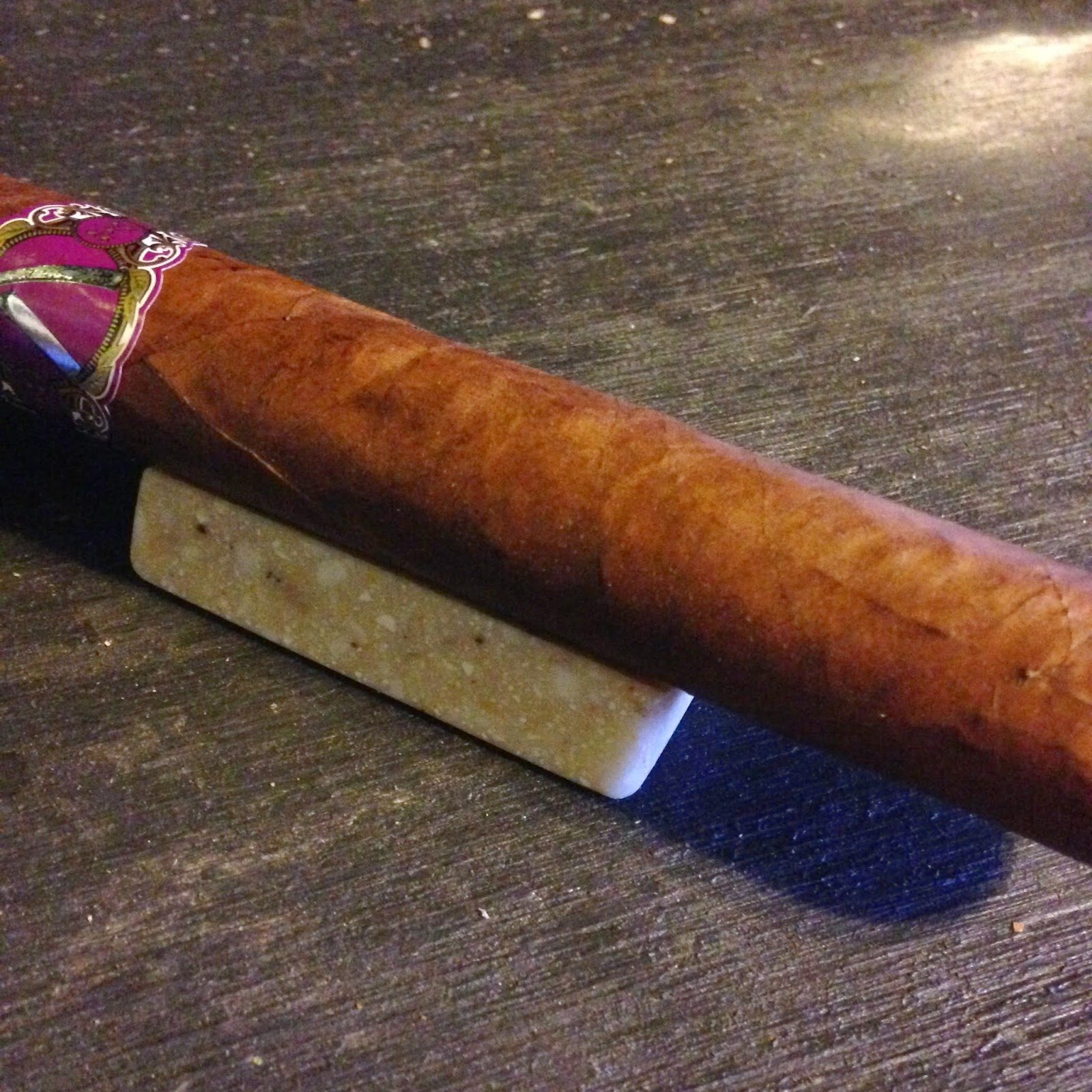 The cigar begins by showing some light spice notes, and it is showing some lovely white pepper notes in there. There are some leather and mineral notes as well, and I am picking up some caramel notes on top of that. There are some salted wood qualities present as well, and it is a dryer smoke that has a nice spice level. I am smoking the Toro offering, and it is great, but I bet this is just as great in a smaller offering or even a larger offering. The construction is solid overall, though there are some uneven points at times, and it is producing a charcoal ash that is firm on the end. The ash is not letting go, and I am getting a lot of smoke off of each draw. The draw is cool, and I would say the cigar smokes at a medium-full level in terms of strength and body. It is a lovely first third and I am looking forward to watching this cigar grow. 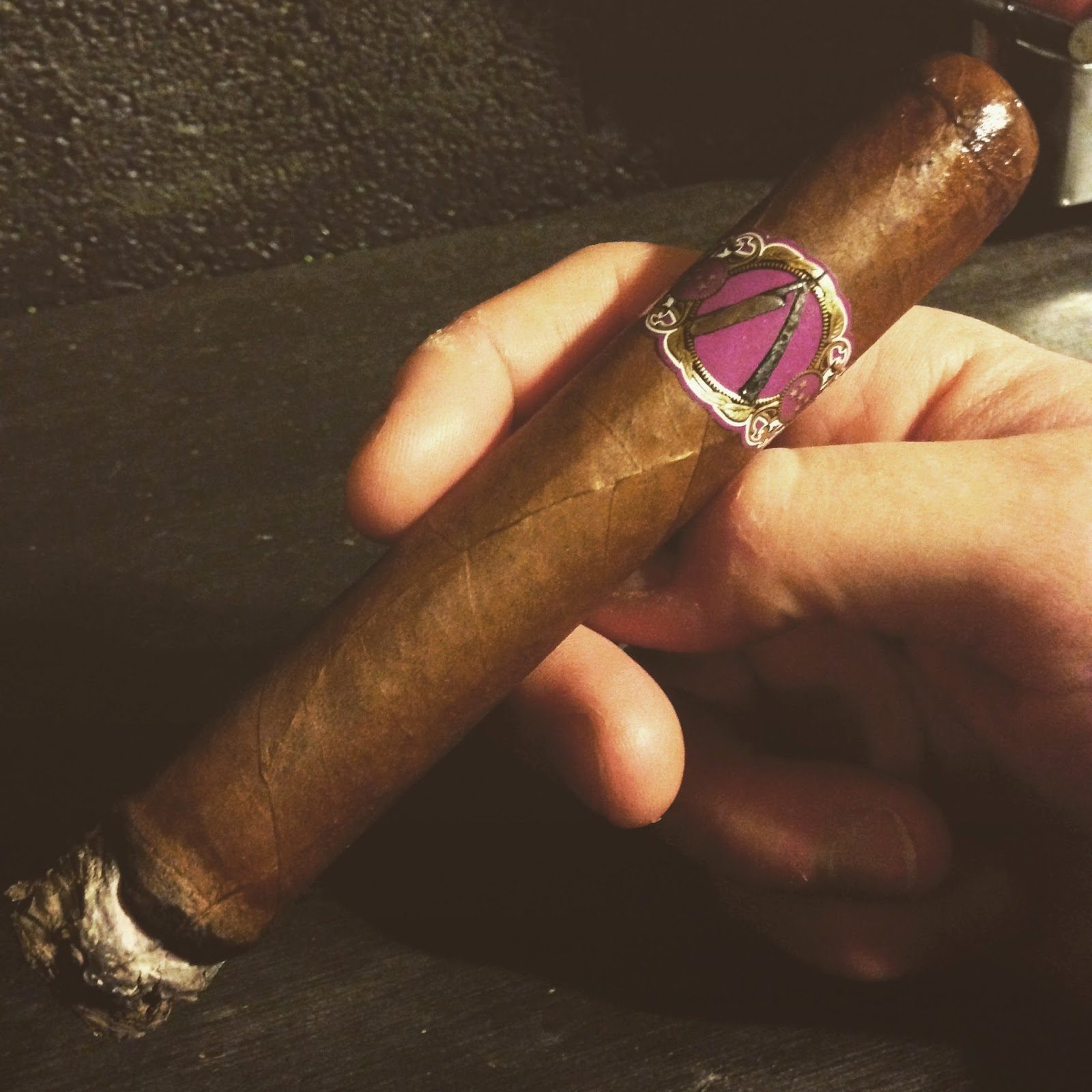 When I get into the second third of the cigar I find that the flavors of salted wood continue, and they are pairing with some nice earthy, caramel and nutty notes now. There are some mineral qualities present with that, and I am getting some faint spice notes on the finish. The spice notes are fairly soft, and they are showing some leather qualities with that. The blend is really to my liking, and with the tobacco being used, it is no surprise. The construction is a lot better in this third of the cigar, and I am getting an even burn line now with that solid charcoal ash on the end. The ash is holding on firmly though and the draw is perfect for me. There is a good bit of smoke being produced as well, and overall I can’t complain about construction. I would classify the strength as being more medium in this third, and the same goes for the body. 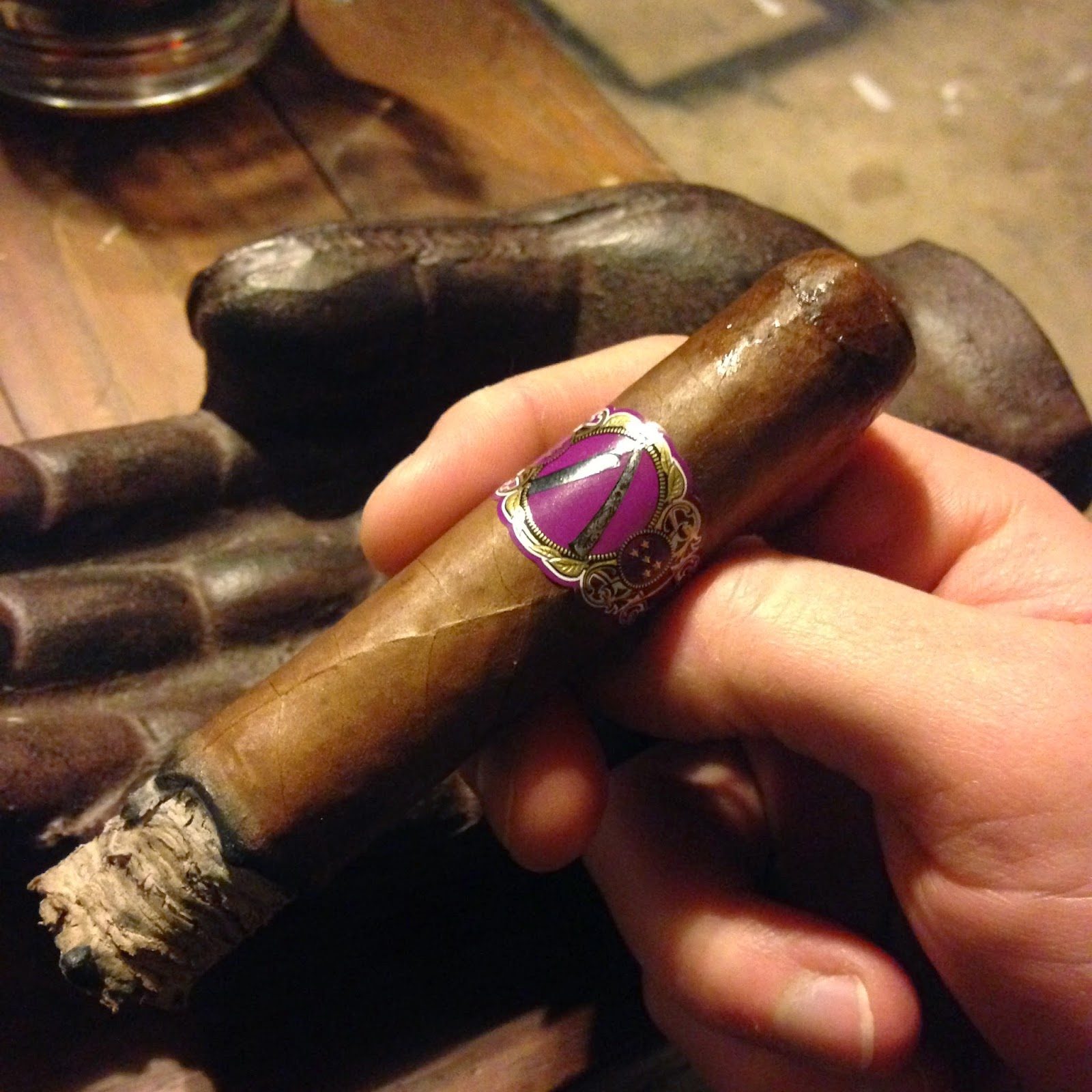 I am in the final third of the cigar now and the flavors of caramel and spices are popping. I am getting those white pepper flavors and they are pairing well with those nutty and earthy qualities. There is a nice mineral flavor present as well, and it has a nice salted wood finish. There is a bit of leather to finish if off, and a sweet aspect with that. The construction remains top notch in the final third and it is showing that even burn line with a solid charcoal ash on the end. The ash is holding on well to the end and there is a nice bit of smoke coming off of each draw. The burn line is razor sharp and this is a well made stick. I would classify the cigar as being medium in strength and body on the end, and this is a great smoke for me in the afternoon or evening. I could probably smoke it in the morning, but the flavors linger for a long time, so it would have to be a smoke I had all day at that point. 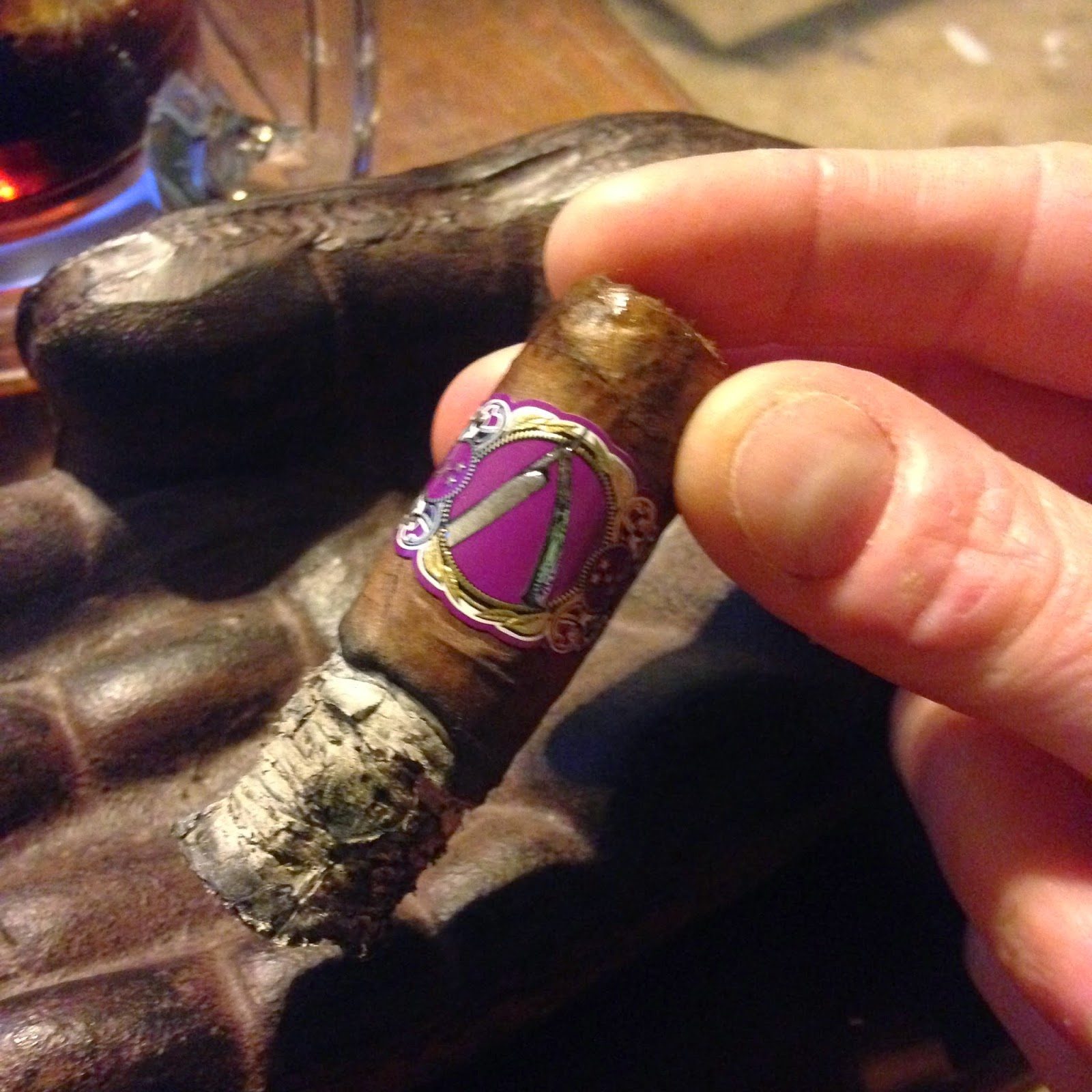 La Barba Purple is a great release from the company and I have been impressed with every release that the company has had. Their blends have been complex blends that show an abundance of flavors. Purple is a blend that is complex and has transitioning with a lot of depth throughout. The sticks I smoked for review were all consistent with flavors being delivered, and it was fairly easy to tell after smoking the second one that I would love my third and fourth one. The construction was great on all of them, and they smoked well with a nice even burn line. For some reason, it smoked in a similar manner to how Caldwell’s Long Live The King, and I think that is the type of tobacco being used, thick and hearty tobacco leaves. This is a blend that would smoke well in a smaller and larger format, and I would love to see the unique qualities that are present throughout the ring gauge offerings. I am giving this stick a 92 rating, and this is one of the most exciting blends I have had this year. This is definitely a stick I will be coming back to, and everyone I have spoken to has truly enjoyed it. 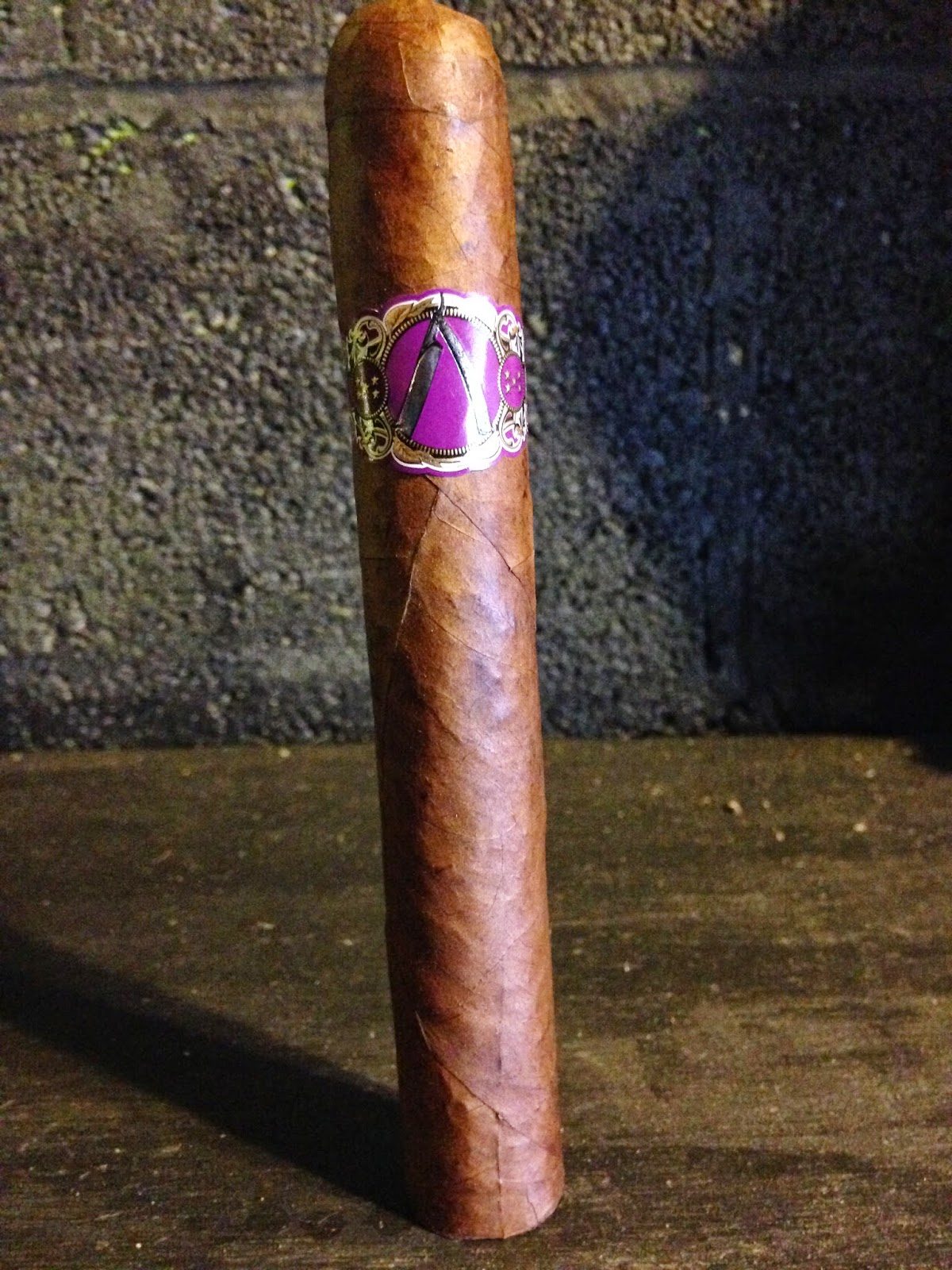