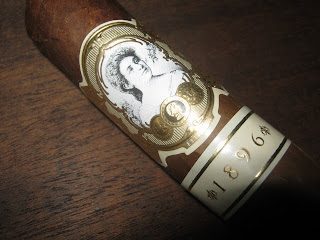 I was smoking this cigar the other day, and I was not sure if I had reviewed it. Well, it turns out I had, but it was really not much of a review, so I have decided to give a “proper review” of the cigar. My mind is wondering, and when I say “proper review,”  I am thinking of the movie Snatch when the character Turkish is talking to Tommy, and they have placed a bet against the pikeys about the dogs chasing the hare and how if the hare gets caught it will be “proper fucked.” Sorry, went rambling there, let‘s get back on course shall we? So I smoked this cigar some time back when I was in Washington D.C. and did a quick review, but it does not do it justice. This is a cigar that must be treasured, and that refers to time smoking, and also the occasion. La Palina 1896 Robusto was a limited edition released by La Palina Cigars that was launched with their first line in 2010, and was released in a single vitola. It was, and still is a cigar that is a treat, and should be smoked only on those perfect times.

The cigar is a robusto vitola, and measures 4.75” with a 52 ring gauge. The cigar gets its name from when Sam Paley, William Paley’s grandfather started the Congressional Cigar Company, and opened his first cigar shop in Chicago, Illinois in 1896. I have talked about the history of the company before, and you can refer to my reviews of other La Palina Cigars at this link. The cigar features an Ecuadorian Habano wrapper, a Costa Rican binder, and fillers from Nicaragua and Honduras. Like his first line, the cigar is made at the Graycliff Cigar Factory in the Bahamas, and is made in the Cuban fashion. The wrapper has a rough texture, with veins present, and really reminds me of some Cuban wrappers. It is definitely Colorado in coloring, and has a marbled coloring of brown and red. The cigar has lovely aromas of spices, coffee, cedar, leather and cocoa, and I am ready to smoke this cigar again.

The cigar opens up with pronounced flavors, and I am getting some definite spices notes of cinnamon and cloves, and also some barnyard, tea, leather and rich earth notes. There are some coffee and cocoa notes present as well with the cigar, but nothing major. This is really a great size for a robusto, and I like that it is somewhat shorter but a larger ring gauge. It has tons of tobacco inside, but it still offers a great draw, and I am getting a slightly wavy burn line. I would say the strength of the cigar is around medium, medium full to me, and very enjoyable. This is really a cigar that captures Cubanesque flavors, and also those Graycliff flavor profiles a well. It is producing a great amount of smoke as well, and this cigar has aged well since the original release.

In the second third of the cigar right now and I have just gotten a blast of complex flavors. I am getting these jammy notes that you get with a Shiraz or Zinfandel, and it is paired with dark cherry notes as well. The coffee flavors are much more pronounced in this third, and so are the cocoa notes. There is still a bit of leather, tea and barnyard flavors present, and a finish of spice, but most of all it is very enjoyable. The cigar is very complex in terms of flavors, and the strength of the cigar has stayed between that medium and medium full range. The burn line has gotten better in this third, and I would say it is now fairly even. The ash is still holding on to the cigar very well, and it is producing a great amount of smoke on the cool draws.

I am close to finishing this cigar, and I really do not want it to end. The coffee notes are still so wonderful, maybe more espresso at this point, and the berry and cherry notes are still rocking. The tea notes have softened and dissipated, but the leather, wood and rich earth flavors are going strong. It definitely finishes more rich than it started, and it is a nice change of pace. The cigar really starts off dry and spicy but ends with a nice rich and full flavor profile which is great blending. Throughout the cigar the spice notes have been fairly consistent, but they have been matched with different flavors changing the cigar. The cigar finishes at a solid medium full level, and the burn line is razor sharp at the end. I smoke the cigar down to the nub, and on the last draw it is cool and flavorful.

Aging has done a great thing to this cigar, and though it was still very enjoyable when they were first released, I think they are incredible now. I have a box of these that I am holding on to, and singles that I am smoking. I know, I am one of those weird guys that purchase a box of cigars and a single or two of them so that I don’t open the box. I know that there are some stores that still have these cigars in stock, and if you are able to get them I strongly urge you to pick them up. They are a pricy cigar, but they are a special occasion cigar, and those cigars are always needed. This is a cigar that you want to smoke slowly and really savor all that it has to offer. Definitely a great cigar in my opinion, and I would say this cigar falls anywhere between a 92 and 94, let’s say 93. This is a great cigar that is made by a great company, and headed by a great man. I would like to say that this was a wonderful job on bringing back a classic line, and a family tradition. Glad you are a part of the industry Mr. Paley.