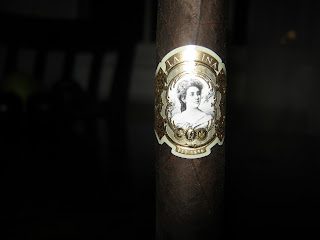 Making a cigar with a wrapper that has undergone the maduro process is a tricky thing. I say that not out of experience in blending, but out of experience in smoking many maduro cigars. More often than not, cigars with a maduro wrapper are somewhat one dimensional and show those standard maduro flavors. There are some definite exceptions to that statement, but there are many that fall into the never ending pit. With that comment being said about maduros, there are some maduros that I find are better than others. I am not a fan of cigars with a Connecticut Broadleaf wrapper, but I am a fan of cigars with a San Andres Maduro wrapper. Along with that, it seems that every manufacturer has a maduro on the market. For a while I could not think of a manufacturer who didn’t except for La Palina. That all changed though when they announced the new La Palina Maduro this year, and with that announced that they would be using one of my favorite maduro wrappers as well.
Releasing two new lines, and a new size to the El Diario line, it was a big year for La Palina. I look at the Maduro line as the counterpart to the El Diario line, and the Classic line as the new and more affordable every La Palina. I see the El Diario line as an everyday smoke, but to some the Classic will be a true everyday smoke. The new La Palina Maduro line is going to feature four vitolas, and like El Diario, is going to be made in Honduras at Raices Cubanas. I believe the blend of filler and binder tobacco is the same as El Diario, but it is possible and more than likely that there were some tweaks to the final blend of this line. For the review of the La Palina Maduro, I was gifted the robusto vitola, and it takes the title Maduro 52.

The Maduro 52 measures 5 inches with a 52 ring gauge and is the shortest of the four releases this year. It is on the smaller side of the four releases in terms of ring gauge, but is a little bit chunkier than your standard robusto. The cigar is draped with a gorgeous Mexican San Andres wrapper, and underneath that are two binder leaves, both Honduran. (I do not know if they are Criollo or Corojo.) The filler consists of Nicaraguan tobacco, and is a mixture of Corojo and Criollo tobacco. There is a great triple cap to the cigar, and it has a lovely dark Maduro coloring. There are some aspects to the cigar which are close to Colorado Maduro in coloring, but some that are very Oscuro like. It is oily to touch, and with that has a somewhat rough texture. There are a few veins present throughout, and it has a lovely aroma of dark stone fruit, rich earth, dark cocoa, coffee and some spices on the finish.

Upon lighting the cigar there is no lack in the flavor department. From the get-go there was tons of flavors all over the place that it was somewhat difficult to pick them all up. I definitely had those lovely rich earth, sweet spices, cocoa and coffee notes; but I was also picking up some dark stone fruit notes along with bits of nuts and toast. The spices were really that of Christmas spices throughout the first third, and it was smooth exhaling out of my nose. I was finding the strength of the cigar to be at a solid medium body level, and with that this is a cigar that will age wonderfully. The cigar had a fairly even burn line throughout the first third, and with that there was a lovely ash that was dark charcoal in coloring. I was getting a nice amount of smoke with the cigar, and with that was able to produce some great rings.

In the second third of the cigar I was still picking up all those amazing flavors from the first third, and it was here that I began to pick up a lot more Christmas spice and plum notes. There were some definite dark cherry notes present in the cigar as well, and they were balanced by some damp wood and rich earth notes. The finish to the cigar was that of cocoa, nuts and coffee beans; and I have already said before this cigar is smoking wonderfully. The strength level was still at that solid medium body in the second third, and I am finding it to be a cigar that I can smoke anytime of the day. I typically do not begin the day with a maduro, but this is a cigar that I definitely would smoke as a first cigar. The cigar was still showing a somewhat wavy burn line, but with that was that was a great dark charcoal ash. When I get into the final third I realize that cigar is coming to a close, and that is a sad thought. The flavors have been incredible from beginning to end, and it is a maduro that has not been boring in any sense. Each third has shown so many fantastic flavors, and while there has been no drastic change in flavor profile, each third has had certain flavors that have just popped. (I was going to use the word protruded, but popped just seemed more appropriate.) The cigar is finishing by showing some lovely coffee, cocoa and toasty notes as the main focus, but it is still showing those barnyard and stone fruit notes as well. The cigar burned wonderfully in the final third, and with that left that lovely dark charcoal ash. Smoking at that solid medium body level towards the end, I smoked the cigar down to the nub where it remained rich in flavors, cool and producing tons of smoke.

Of the cigars I have smoked thus far that were shown at the 2012 IPCPR, this was definitely the best of them. I still have many sticks to review, but this cigar possessed so many great qualities to it, that I do not foresee many releases competing on all levels. In terms of a maduro and a San Andres Maduro wrapper this cigar was delicious. From beginning to end the cigar showed so many fantastic flavors that you want in a cigar and was incredibly rich as well. This was a cigar that possessed so many flavors at once that it was incredibly once and with those flavors remaining prominent and present from beginning to end, you had the opportunity to pick out certain flavor profiles in each third. It is definitely one of the better maduros I have had in some time, and is a cigar that is going to do incredibly well with the current market. La Palina has really made a cigar of all types for this market, and the only field left for them to engage in is that of the box-pressed cigar. I give this smoke a 94, and look forward to picking more up on shelves at fine tobacconists nationwide.