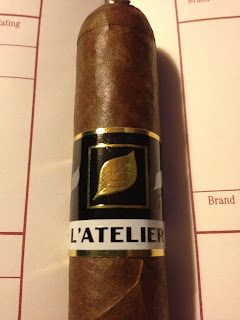 I know I recently reviewed the LAT 54, but I am loving this line so much, that I wanted to give it some more press. I was eager to try it before it was released, and since it has come out I have not been able to get enough of them. I have shared the smoke with two people, and both those smokers have gone insane over them. I am still eager to hear the thoughts of some of my other cigar smoking friends whose opinions I trust, but in the meantime I am just enjoying greatness. What’s great about this smoke is that it comes from some members of the cigar industry who have been working with cigars for sometime, but it is being release under a new company.

L’Atelier Imports was created by Pete Johnson of Tatuaje, Dan Welsh of New Havana Cigars, Sean “Casper” Johnson, and K.C. Johnson. Now K.C. Johnson and Pete are brothers, but the four of them are so close that they are all brothers in that sense. While L’Atelier Imports is the company, L”Atelier is the flagship brand. It is French for the workshop, and is available in three vitolas right now. I have heard a Maduro is in creation as well. The cigar is composed of Nicaraguan tobacco in the fillers and binders, but has a wrapper that is the first of its kind. It is called Sancti Spiritus, and is a hybrid of Criollo and Pelo de Oro. It is grown in Ecuador, and this is the first cigar to feature this wrapper. I am a big fan of both of those tobacco seeds, and Pelo de Oro is really on the grow right now. Pelo de Oro is Spanish for “golden hair” and the tobacco is typically noted for being very strong, flavorful and sweet. For this review I chose the LAT 52, and the cigar measures 4 3/4″ with a 52 ring gauge. The cigar features a wrapper that is darker than others I have seen, and has some tooth and oils present. It is clearly a dark Colorado wrapper, and has aromas of sweet spices, hay, oak, earth and tea notes.

The cigar begins wonderfully, and it is so flavorful and complex. I am picking up some great oak notes at the forefront, and with that there is a nice bit of tea leaves and Asian spices. I am getting bits of cocoa and earth present as well, and there is even this doughy flavor present as well. It is definitely a cigar focuses on flavor, and that is what I love. The strength level is smoking at a level between medium and medium full in body, and it is because of that that I could smoke it anytime of the day. It is definitely a great first cigar of the day, and a spectacular cigar to finish the day with. There is a nice burn line with the cigar, a little wobbly, and producing a wonderful charcoal ash that is firm on the end. I am in the second half of the cigar and the flavors are still out of this world. I am getting those great oak and tea leaf notes, and it is showing a nice dryness to the flavor profile. With that, there is a balanced flavor profile with the cocoa and earthy notes. I am still getting those Asian spice notes, and with that there is a great floral finish to it. The doughy notes are still present, but not as strong as they were in the first half. The burn has perfected itself in this half, and it is now smoking evenly and producing that same great ash. I am finding the strength level to remain at that medium-medium/full level, and I can not reiterate enough that this is my type of cigar. On the last draw the cigar is cool and flavorful, and I am burning my fingers and lips on the end.

This smoke was just as good as the LAT 54, no surprise, the only downside was that it was a shorter smoke. I wanted to smoke this cigar for another hour after finishing it. I am a big fan of this smoke right now, and I can not get enough of them. I think they offer a great strength level for anytime, and with that tons of flavors. You really got to get a little bit more of the wrapper with this offering, and it is an incredible wrapper. The construction was solid from beginning to end, and it produced a great hearty charcoal colored ash. I am all about the flavors with a cigar, and because of that this cigar rocks. If you have not picked up this cigar yet, you need to right away! After smoking the LAT 52, I felt the same thing I did after smoking the LAT 54, and that this is the best release from the 2012 IPCPR.