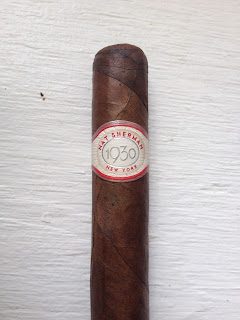 If there is a cigar company that has thoroughly impressed me over the past year it has been Nat Sherman. Since my first review of the Nat Sherman Timeless in June of 2012 I saw a cigar by a company that was completely different than anything they had produced before. A big part of this falls on their hiring of Michael Herklots and when he came to the company in 2011. I believe that he brought a lot of knowledge and skills that he had learned when working for Davidoff. He took the education from Davidoff and added his own personal twist to create a new Nat Sherman. I have not yet reviewed the Nat Sherman Sterling, but from what I have heard he has done great things this year, and followed up on the Timeless successfully. With that being said let us look at the Sherman 1930.

Made to honor the founding year of Nat Sherman, 1930, the cigar brings together the history of Nat Sherman and modern cigars. It meant to be a full body experience smoke that brings Nat Sherman to a new level. The cigar is composed of mostly Dominican tobacco, and has a Dominican wrapper. The binder is Dominican and the filler is a blend of Dominican and Nicaraguan tobacco. Like most of the cigar made for Nat Sherman, it is made in the Dominican Republic, and is made at Quesada’s factory MATASA. For this review I chose the Gorona Grande, and the cigar measures 6″ with a 46 ring gauge. The cigar has a beautiful cap and has a very oily wrapper. The cigar is firm to touch and it has a coloring that is slightly dark than Colorado in parts. I would say it is between Colorado and Colorado Maduro. There are few veins present and it has an aroma of spices, pepper, leather, wood and meaty qualities. 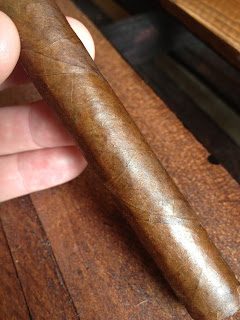 The cigar opens up by showing some solid flavors. I am getting this nice chocolate flavor that is soft but definitely present. Along with that I am getting this terrific oak and vanilla flavor profile. There are some spices and leather notes present with that, and it has a lovely peppery finish. I would say that it has a black pepper flavor profile, and this is a terrific cigar in terms of flavors. The body overall is at a medium full level and I would say the strength is close to medium full as well. In terms of construction the cigar is stellar, and I am getting a razor sharp burn line that is producing a lovely ash that is charcoal in coloring. The draw is a little tight, but producing a concentrated amount of smoke overall. So far I have to say this is a nice beginning to the cigar and I believe it is following up on the Timeless very well. 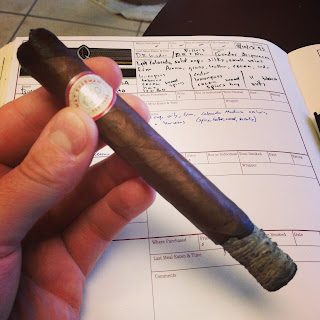 When I get into the second third of the cigar I find the peppery notes to be gaining ground and they are pairing with the chocolate notes quite well. There are still some meaty and leathery notes in the background, and I am getting those lovely oak, vanilla and spice notes still as well. Overall I would say this is a terrific flavor profile that is very complex, and the blend is very well balanced. In the second third of the cigar I find the strength to be remaining at a medium full level, and I would say the body is at the same level as well. In terms of construction the cigar is perfect and it has a razor sharp burn line with a terrific ash that is beautiful on the end of the cigar. The more I smoke the cigar I find the draw to be perfect for me, and while some may not care for the tighter draw I do. This is definitely a terrific blend and a stronger blend for Nat Sherman. 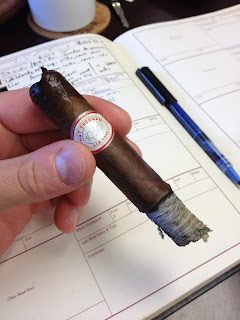 I am in the final third of the cigar now and I find the flavor profile to be finishing wonderfully. The cocoa notes have faded some, but there is that lovely vanilla, oak and spice flavor profile still which makes for a terrific finish. I am still getting some pepper notes with the cigar, and there are some meaty and leather notes that are enjoyable on the finish. I am finding the strength and body of the cigar to be at a solid medium full finish when I come to the end, and it is has remained a great level from beginning to end. The construction on the cigar has been nothing but stellar from beginning to end and the final third is no exception. I have a perfect burn line with the cigar, and the ash is keeping that great light gray/charcoal coloring. The final draw to the smoke is wonderful and cool, and there is a nice leather, oak, vanilla and peppery finish. 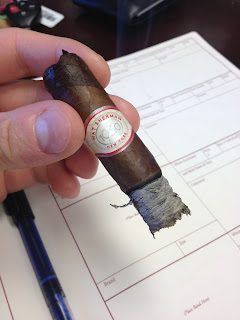 The 1930 showed incredible construction from beginning to end, and it had a razor sharp burn line that produced a lovely charcoal colored ash. The draw was a little tight, but I am not one that likes a draw that is producing a lot of smoke that is not as concentrated. I think the cigar would do very well if dry boxed, and I believe that would open the up the cigar and take it to a new level. There were definitely some complex flavors and I found that it showed that MATASA flavor profile. MATASA has a great way of making a Dominican made cigar taste like it is made in Central America. It is a very different factory than La Aurora, Fuente, and Davidoff. I do believe that Nat Sherman is doing a solid job rebuilding their cigar arm, and this is a cigar I would smoke again. I have been asked by many people if it is better than the Timeless Dominican. I have to say that it is not, but it is still a terrific cigar that needs to be sampled. This is more Dominican than the Timeless, and it produces a completely different experience. I am giving this cigar a solid 91. 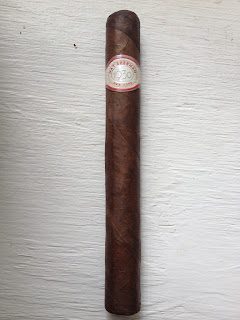