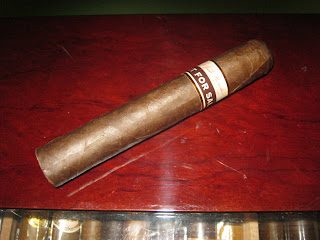 If you have ever been to a Miami Cigar & Company event then you have possibly had the pleasure of enjoying this cigar. As the name says, the cigar is “Not for Sale,” and the only people who have access to these cigars are the company’s employees. They are typically given out at events, or the reps might give them out to people to try out from time to time. It’s a one size vitola, and because of that dark wrapper it seems larger. The cigar is made in Esteli, Nicaragua by Don Pepin at the ever popular My Father Cigar Factory, and measures 5 1/2″ with a 54 ring gauge. The cigar is 100% Nicaraguan tobacco, and the wrapper is Habano Seed. It is classified as reddish brown Rosado, but it is definitely Oscuro in coloring.

The cigar is beautiful in hand. It has a nice smooth wrapper, not oily or gritty, and it has very few veins present. There are some larger veins present in the cigar, but those are just containing some great flavors. It has a solid jet black coloring to it, and it is definitely a maduro. The cigar is very firm in hand, and the triple cap is placed perfectly. When I hold the foot and wrapper to my nose I get wonderful aromas of rich earth, wood and a lot of spice notes. It really has those classic maduro qualities to it, and I am looking forward to smoking this cigar. After I cut the head I get a solid draw and it is very flavorful and rich as well.

As I light the cigar I am immediately greeted with those great flavors that I got from the aroma and it gives off the impression of being a Nicaraguan puro. There are a lot of spice notes present with the cigar, bits of anise, cinnamon and pepper, and there is a nice rich oak flavor profile with leather and rich earth. It is easily medium full in body, and producing a great amount of smoke. The cigar is burning very well in this first third, and I am getting a razor sharp burn with a solid ash that is light charcoal gray in coloring. I imagine the ash could hold on to the cigar for some time but I put it down after the first third and it is still holding solidly.

I just ashed the cigar and I am in the second third and it is still very similar in flavors. There is a bit of unsweetened dark cocoa present, but overall it is still showing those classic barnyard and damp wood flavors. There are tons of rich earth flavors, tobacco notes, damp oak and those great spice notes from the first third. It is really a flavorful cigar, and I love the blending job on it. It would be great to see this line in different sizes, maybe a corona gorda or petit corona. Either way this cigar is still performing wonderfully, and I am getting a solid ash with a great razor sharp burn line to it. It is still over medium full in body, but anything less would not go with these flavors.

In the final third of the cigar now, and as the cigar comes to a close I really wish I had another one. This was really an enjoyable cigar, and would be great with a nice strong red or a solid heavy beer. This is perfect cigar for later in the evening, or after a big meal. The flavors in the final third are still what they were in the first and the second, and they are heavy, dark and rich. Though all the flavors are very prominent they are balanced off one another perfectly, and it makes the cigar very enjoyable. The leather, oak and rich earth notes all make a long flavorful finish, and the spice notes really add a lot of complexity to the cigar. The cigar burns wonderfully all the way to the end, still showing a great burn line and a solid amount of smoke, and even on my last puff before letting it rest was I getting a cool and flavorful draw.

I really enjoyed this cigar, and I love the concept behind it. The idea of having a cigar that is only given out at events, and is not able to be purchased is very cool. What it does is encourage customer to buy more cigars at an event, which you should, and it also encourages retailers to hold events for their customers. Events really offer customers a great chance to break out from their typical cigars and enjoy something they might not usually smoke. Not that I wouldn’t buy cigars at an event and support that company, but this is a cigar that I would like to have around just for the fun, and because of that I would buy so many cigars to get some. I give this cigar anywhere between an 89 and 91. I would definitely have to smoke more to get a better opinion, but it had tons of great flavors throughout, a solid burn line, and great construction. It wasn’t overly complex, but the flavors it possessed were rich and entertaining.

* Cigar gifted to me by Miami Cigars and Company Representative.