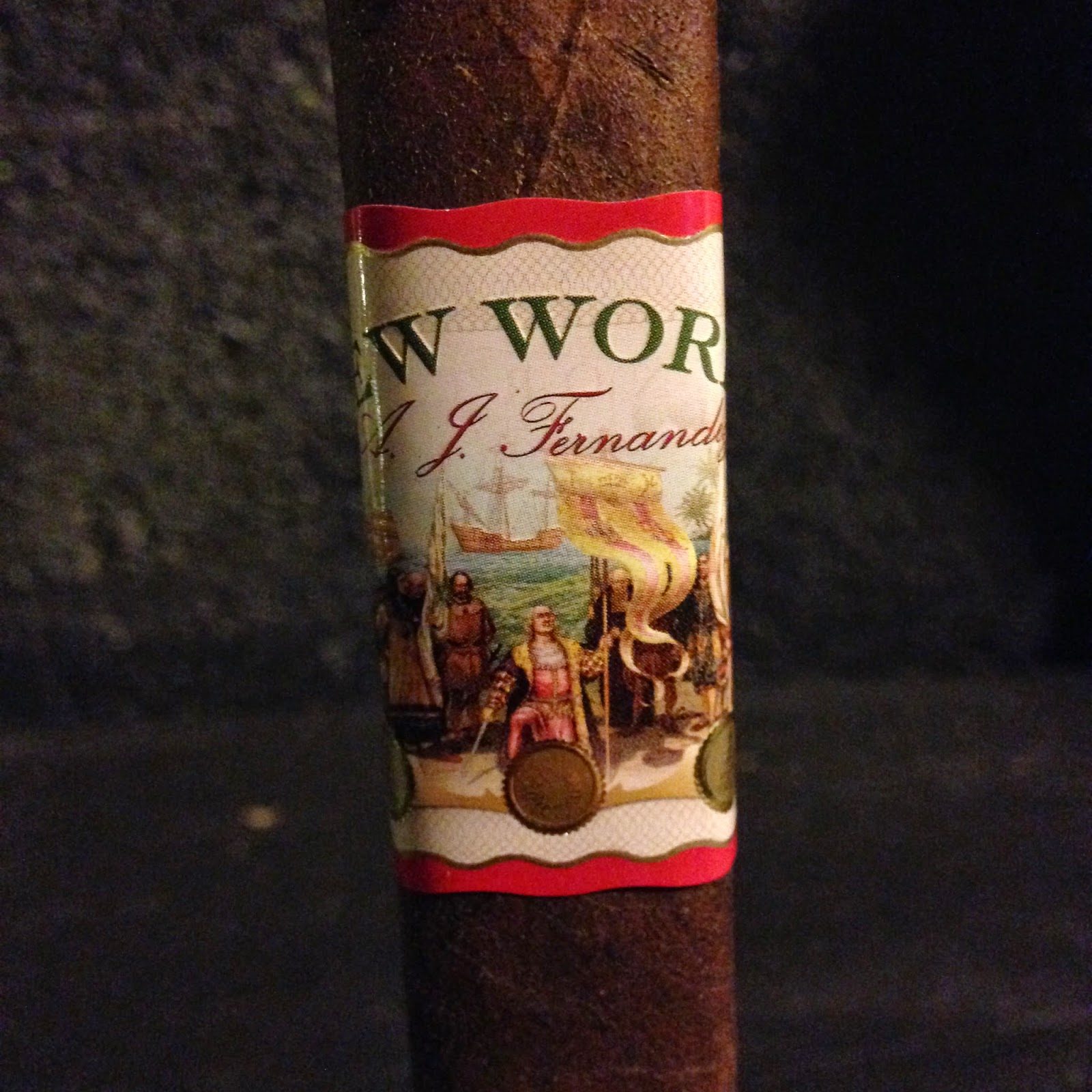 Released this year, New World was and still is an exciting new release from A.J. Fernandez. It actually just earned the award as Cigar of the Year by Cigar Journal, so A.J. Fernandez Cigars has some good things going for them right now with this release. Along with that excitement, it is a special cigar for the company and A.J. as it is the first cigar that was created by A.J. and his father. The two worked together closely on this cigar and while you think they would honor each other in the creation of this cigar, that is not the case. The cigar actually pays tribute to Columbus reaching the “New World,” and with his arrival coming across tobacco and early versions of what we call cigars today. The company actually uses the word discovery when talking about Columbus and tobacco, but since tobacco was already around and Taino people were smoking early versions of cigars, I decided to not use that word. Enough of that though, let’s take a look at the New World Navegante.

For this review I went with the Navegante vitola, and it measures 5 1/2″ with a 55 ring gauge. The cigar cmes with a Dark Nicaraguan wrapper, seed not given, and a binder from Jalapa. The filler is a blend of Nicaraguan tobacco, and it is composed with tobacco from Ometepe, Condega and Esteli. The New World has an extreme press to it, and with the nice chocolate coloring to the wrapper, it comes off as a thick chocolate bar. There are very few veins present throughout the smoke, and it has a big cap applied to the head. The foot is decorated with a lovely and and the main band has a nice portrait of the main man, Christopher Columbus.The foot gives off an aroma of cherries, tobacco and chocolate, and the wrapper is showing some spice, tobacco and wood notes. 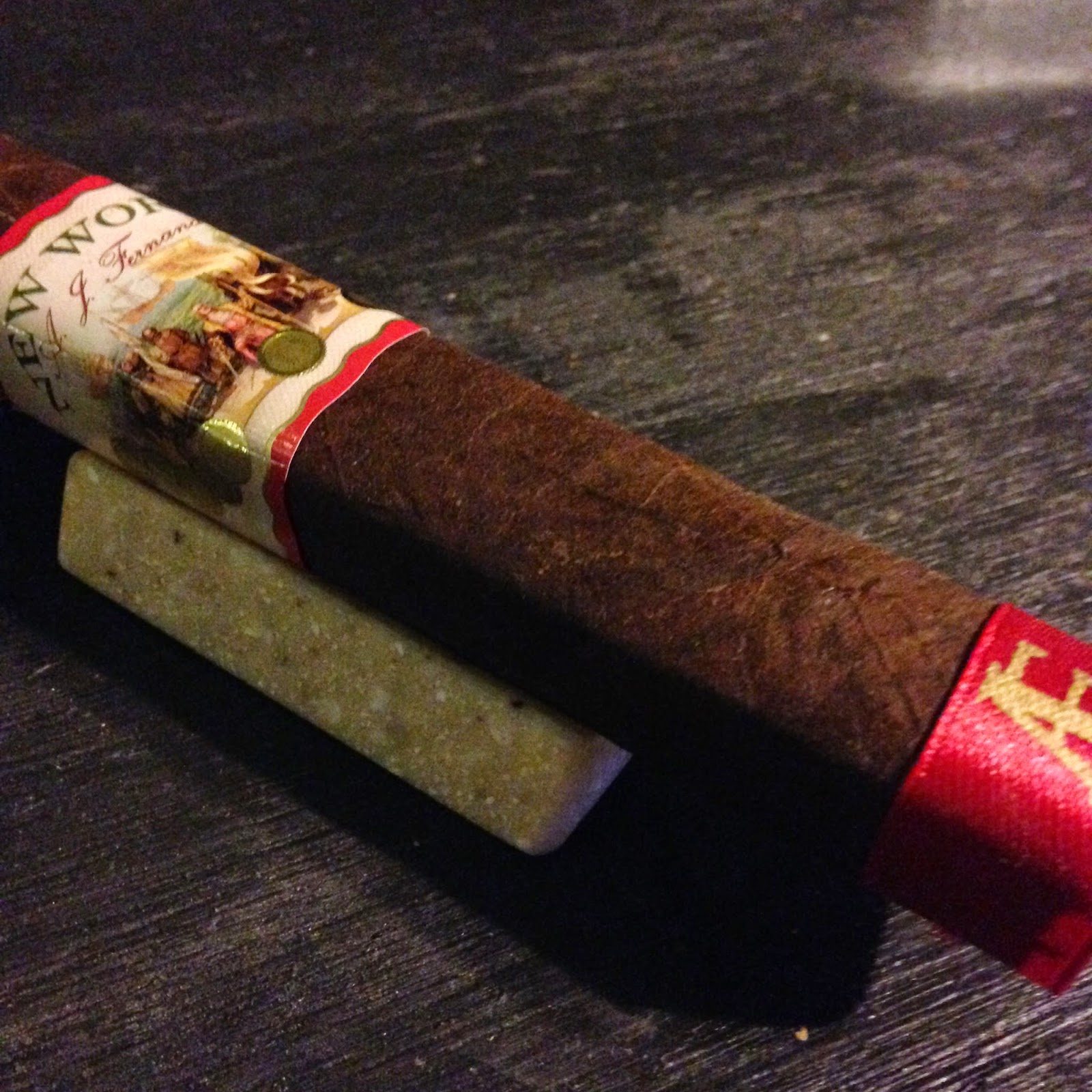 The first third opens up by showing some noticeable cherry cordial notes and it is super rich and sweet. There are some further rich earth notes behind that, but for the most part it is all about the cherries and chocolate. On the finish I am picking up some notes of wood and spices, and there is a nice bit of pepper on the finish. The construction overall is perfect and it is producing an even burn line on the end with a nice ash along with that. The ash has a nice charcoal coloring to it and it firm throughout. The smoke production is solid overall and this is a well constructed cigar. I would classify the body as being around the medium to medium-full level, and the strength is there as well. So far, this is a nice release from AJ, and I look forward to the second third. 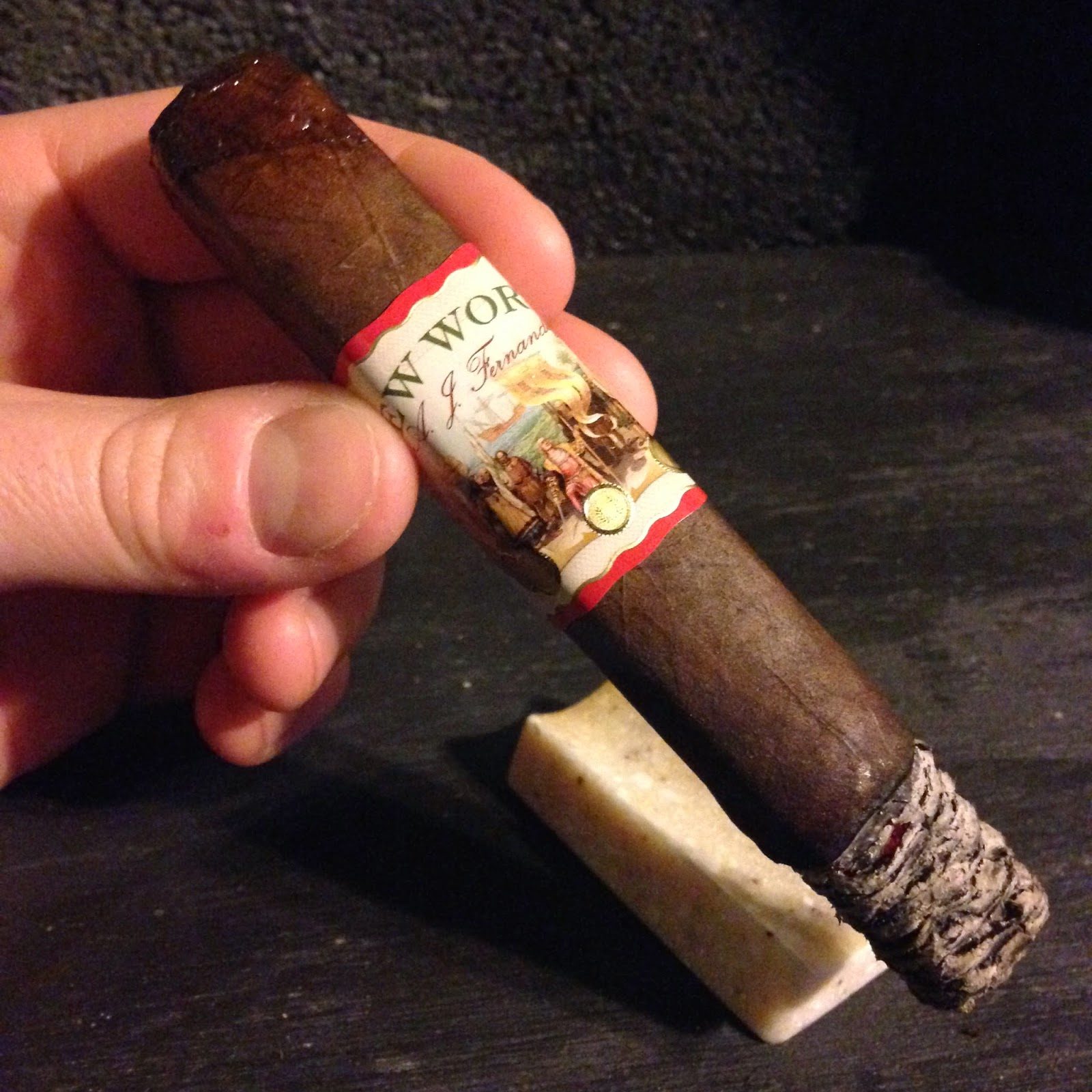 When I get into the second third of the cigar I find that the flavor profile remains fairly similar to that of the first third and it is showing that cherry cordial flavor. I am getting a few more earthy notes overall though and it is less sweet and more natural like. There are some spices and pepper notes present again, and it has nice tobacco and woody finish. The construction is absolutely perfect throughout this third though and it is showing that even burn line with a solid charcoal ash on the end. The ash is holding on firmly to the end and a lot of smoke is being produced with each draw. I would say that the cigar is smoking at a medium-full level in terms of body and strength now, and the cigar is showing growth in that area. Overall, a nice second third and I look forward to the final third. 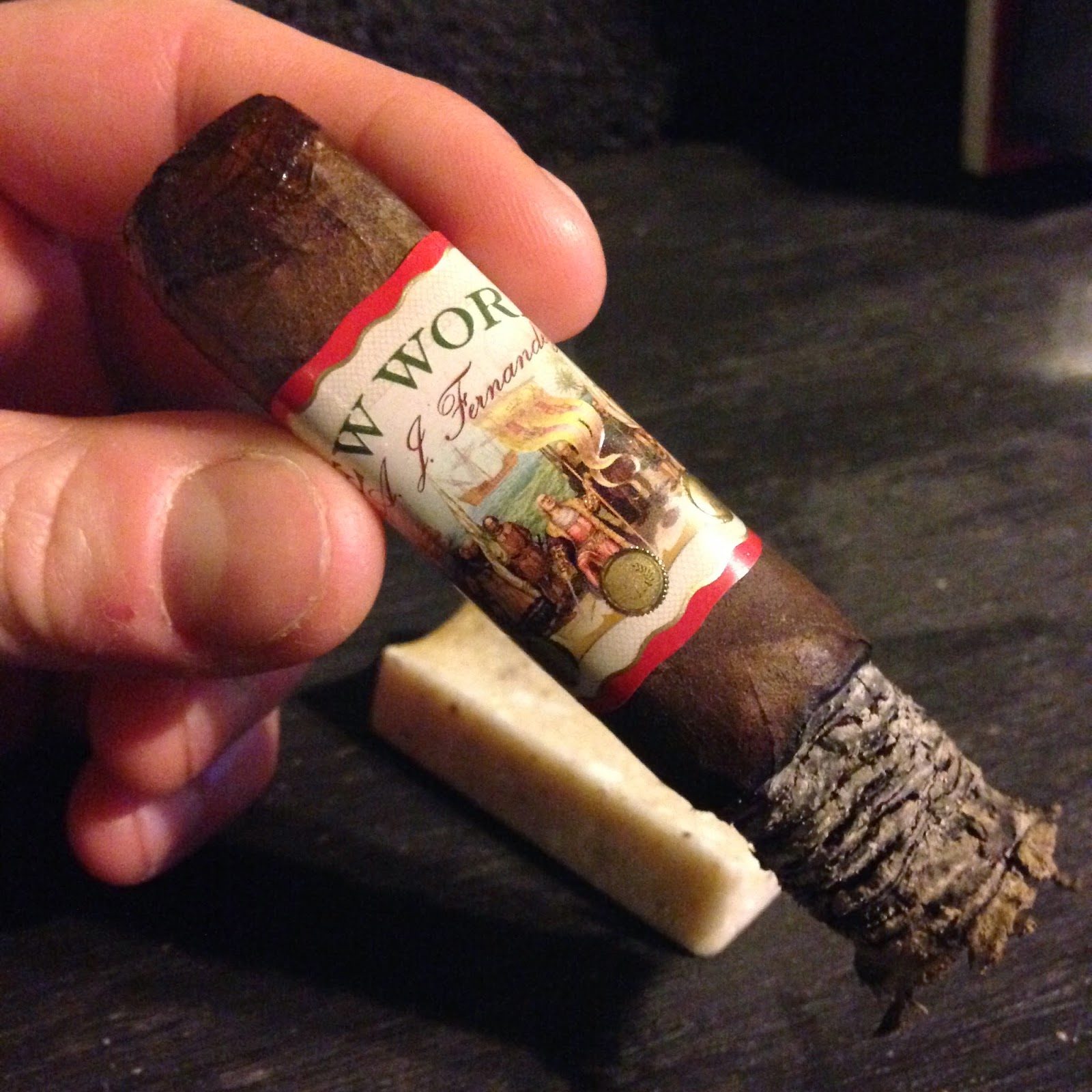 The final third shows a shift in terms of flavors and it is now producing a very rich earth flavor profile that is not overly sweet, but there is just enough sweetness present to balance the spices. I am picking up some pepper and cinnamon notes, and it has a coffee like quality on the finish as well. I know I am picking up some wrapper qualities and I am interested to know what seed it is, as it is classified as Dark Nicaraguan. I want to make a guess that it is a San Andres seed grown in Nicaragua, but I can’t be sure. The construction however is perfect throughout this final third, same as it has been throughout, and it is showing an even burn line with that solid charcoal ash on the end. The body and strength are still at that medium-full level in this third and it plateaued in that sense in the second third. 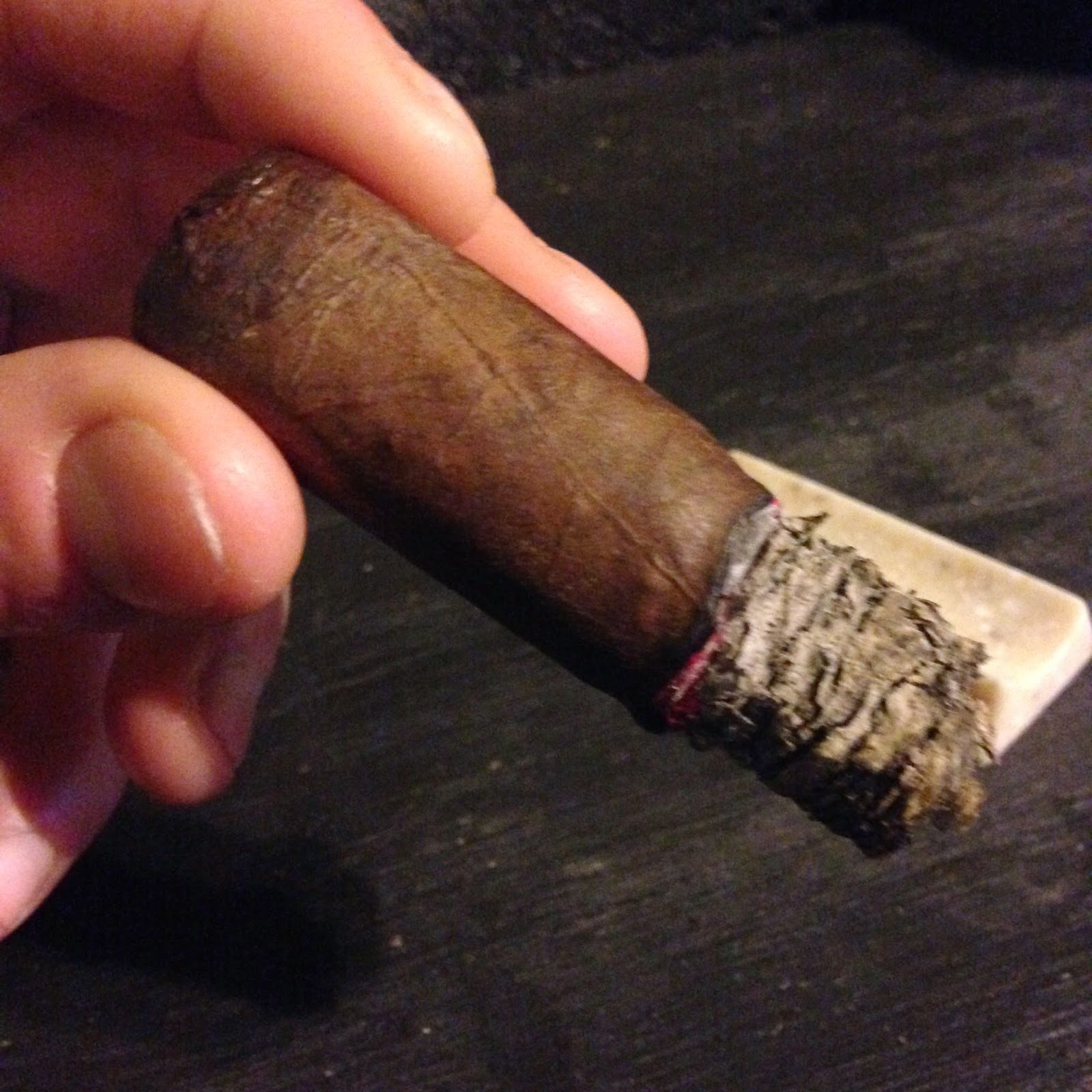 The New World Navegante is a robusto extra that showed excellent construction from beginning to end and delivered a consistent flavor profile. At no point did the cigar just wow me and take me to a whole new level, but I thought more often than not that it went downhill from the first third. The cherry cordial notes were very pleasant in the beginning, but besides that there was nothing very wowing or breathtaking with the cigar. It was a unique blend though, and that is one thing I will give A.J. Fernandez. For being a factory that produces a lot of blends for a lot of people, not just himself, he manages to create a unique blend for all of his stuff. It may not be to my liking, but it is unique. The construction was terrific though and the body and strength were a nice level for me as well. Overall, I am giving the cigar an 86 rating. This was just not a cigar that really impressed me or delivered what I would hope. 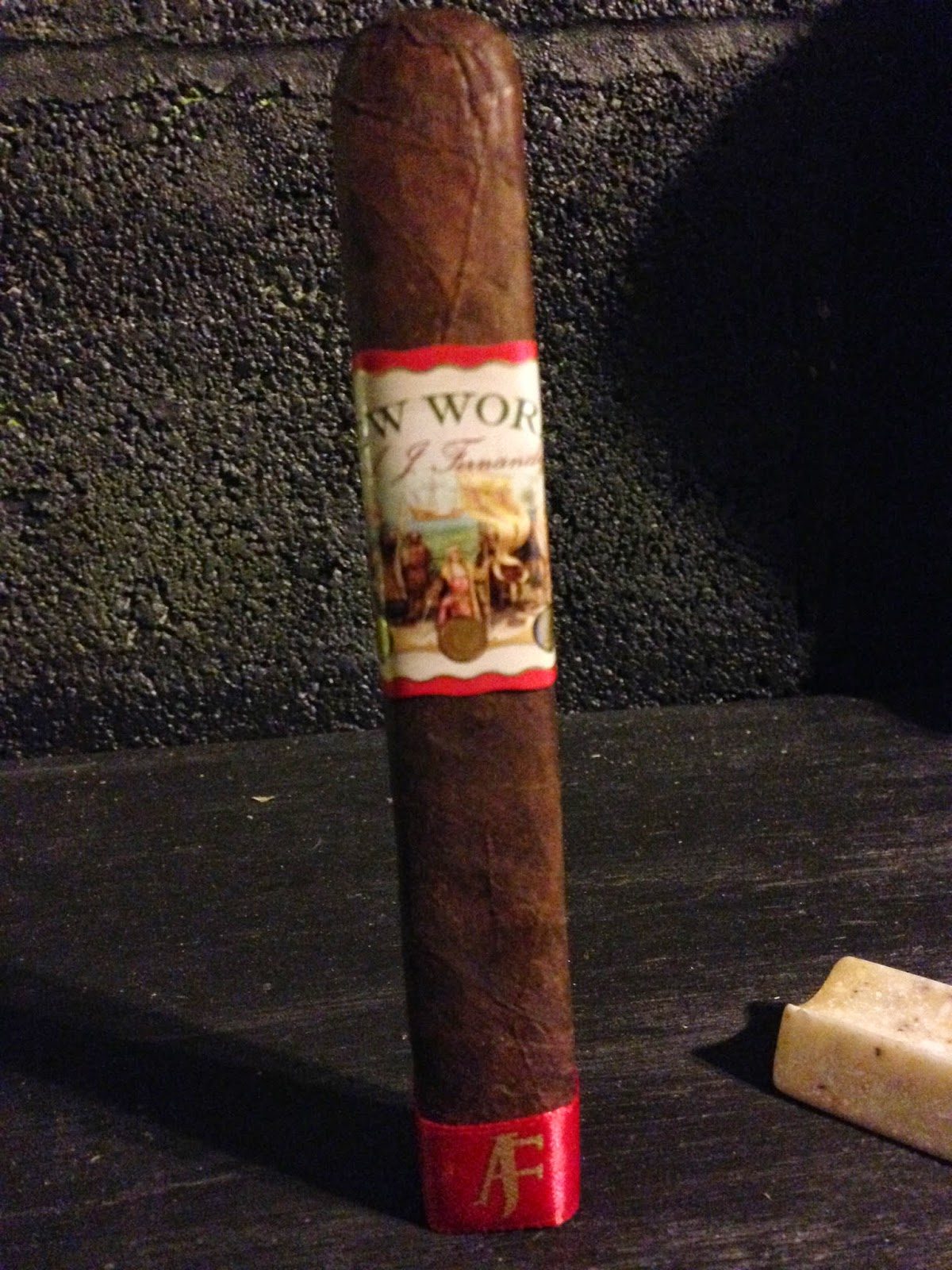