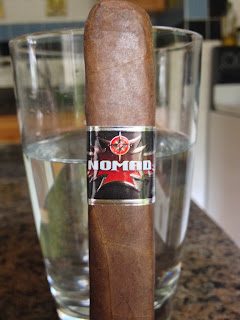 Whenever you see a cigar with a name like S-307 you begin to wonder “what the hell does that mean?” Well, fortunately Fred is a nice guy and reveals the information to us. I on the other hand would say that it is a secret and make a much bigger deal out of it then it needs to be. That is why Fred is a good guy though and I am an ass. The S stands for Sumatra, the wrapper that the cigar utilizes, and the 307 stands for the approximate square miles of Esteli, Nicaragua. Fred knows this because he walked the perimeter of Esteli and calculated the square mileage. True story. I would like you all to know that I am writing this introduction after I have smoked my samples and not before. I don’t want everyone to think I am drunken buffoon while reviewing cigars, but at the same time I do not want to ruin the rawness of Seth’s Humidor.

The S-307 marks the second cigar made in Nicaragua by Fred, but this time it is made at the popular Tabacalera A.J. Fernandez. The cigar features a Sumatra wrapper from Ecuador, an Ecuadorian Habano binder and a filler blend composed of all Nicaraguan tobacco. For this review I was given the Toro offering, and the cigar measures 6″ with a 50 ring gauge. The cigar is covered with your classic example Ecuadorian Sumatra wrapper, and the wrapper has those typical Sumatra qualities. It is very smooth to touch and it is not very oily but there are some faint oils present. There are minors present throughout and it has a faint bit of tooth present. The coloring is that dark natural coloring and I would say the coloring is between Walnut and Hickory. The aroma at the foot shows those sweet spices, dried wood, leather and tobacco qualities. On the wrapper it has some sweet spice and wood qualities as well, and it is a familiar and enjoyable aroma. 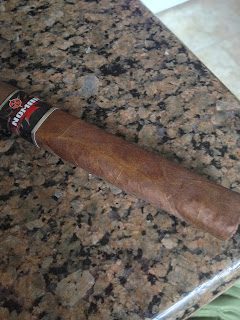 The cigar begins by showing some lovely black pepper notes and I am getting some sweet cedar qualities with that. There are some spices and black pepper notes present, and I am finding it to be the spiciest Sumatra wrapper I have had in a while. There are some leather notes present on the finish and it is a complex and enjoyable smoke. The construction on the cigar is nothing but perfect and it is showing a razor sharp burn line with a beautiful light gray ash that is nearly white. I am getting a great draw with each puff and to me it is not over the top or too tight. There is a lot of smoke being produced with each draw and it is great for rings. I would say that the body of the cigar is between medium and medium full, and the strength level is slightly above medium in this third. To me it is a cigar that is showing great flavor qualities and that is what is important. 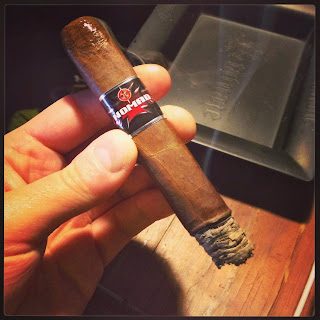 When I get into the second third of the cigar I find that the flavors are remaining somewhat similar, but I am getting some additional flavors with that. The dark cherry, pepper and spice notes are still very present, but I am getting this rich earthy flavors added with that. It definitely rounds out the cigar and adds some additional complexities to the leathery finish. The construction in the second third remains perfect and I am holding on to the razor sharp burn line with ash that is light gray in coloring. It is a firm ash in the terms that it is not flaky, but I am not having the best of luck in building the ash. That could be due to several reasons though. I will say that the body and strength of the cigar have increased with the flavors getting darker. The body is at a solid medium full level in this third and I would say the strength is as well. The spice and pepper increase has shown a rise in the strength and body and I love it. I am in the final third now and this cigar is changing and becoming a whole new cigar from where it was when it began. I am getting some dark spice notes with lots of black pepper, and it is accompanied by some dark cherry notes, but not as sweet as before. They are not the young and sour black cherries, but they are definitely not that sweet ripe flavor. I am still getting those leather and dark wood flavors with the cigar and it had reached a darker level. With the flavors getting darker and darker, the strength and body have grown as well. I would say that the strength of the cigar is now at a full level and it is closing wonderfully. At first I thought this would be a great early afternoon cigar, but now I am saying more later afternoon and evening. The body has grown as well to a full level and it is balancing out the strength. The construction on the cigar is still perfect and it has a razor sharp burn line and light gray ash all the way to the end. The final draw on the cigar is cool and spicy, and I am getting that great smoke production that I have from the get go. 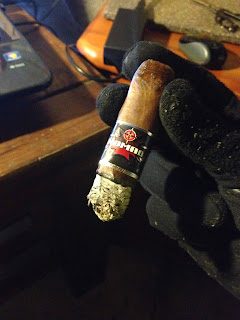 The S-307 is a well blended cigar and I believe that is due to the wrapper and the binder that the cigar utilizes. I feel that if he used Nicaraguan tobacco as the binder it would be just another example of a Sumatra wrapper with Nicaraguan binder and fillers, but instead he adds complexity to the blend with the use of the Ecuadorian Habano binder. The cigar shows a darker and stronger side to the use of Ecuadorian Sumatra, and it is a cigar that shows how great an Ecuadorian Sumatra wrapper cigar can be when it is blended wonderfully. I loved the depth that the cigar possessed from third to third, and I love the growth and transitioning that came along with that. The construction on the cigar was nothing but amazing, and I would not expect anything but that from this factory. Fred knows what he is doing and though he may not have tons of cigars on the market, the ones he does have are solid smokes. I am giving this cigar a solid 91 and will definitely reach out to them when I head over to my local Nomad shop, Twin City Cigars. I would recommend these to all out there, especially those who love Ecuadorian Sumatra. 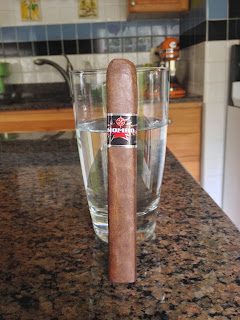