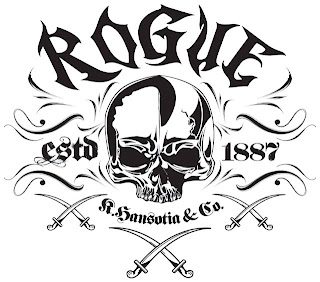 The cigar has been offered at Gurkha events and handed out in retail shops to customers as well throughout the year so far, and the feedback has been positive. Until now no one knew what the cigar would be or what the cigar would be called, but it is now official. The cigar is going to be offered in five vitolas, and will be offered at some affordable prices. The packaging will be your standard 20 count boxes, and for the most part will be in larger ring gauge offerings. The cigar is going to be brick and mortar safe, and Gurkha has been going down that road recently which is very nice. They are a company that is working hard to win back the brick and mortar shops, and we are seeing that with a lot of manufacturers. 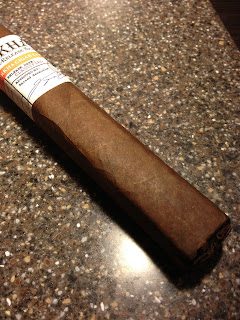 For this review I was given samples of the Bamboozle. The cigar measures 6″ with a 60 ring gauge, and is box-pressed. The cigar has an Ecuadorian Habano wrapper and a rare Ecuadorian binder. What leaf is used they do not say, but given that it is “rare” I would eliminate your standard Sumatra or Habano. A.J. Fernandez used a unique Sumatra Maduro wrapper in the past, so it could be something along those lines. The filler is a blend of the three year old tobacco that is all ligero, and it consists of tobacco from the Dominican Republic, Honduras and Nicaragua. The cigar is beautifully box pressed and has a coloring of dark milk chocolate. There is a nice cap to the cigar and it has a wonderful closed foot. I am getting aromas of strong tobacco, spices, roasted nuts, pepper and leather, and it is a firm cigar in hand. I would say the coloring is Colorado Maduro and there are few veins present while remaining fairly smooth and oily to touch. Lighting the cigar up it begins by showing a lot of peppery flavors. There are some black and red pepper notes to the cigar and it is fairly full bodied. There are some spice notes showing up with the cigar as well, and it is accompanied by some tobacco and leather notes. There is this lovely toasted nut flavor as well with the cigar, and it is a strong cigar. I would say the body of the cigar is at a medium to medium full level, while the strength is most definitely full on that spectrum. The construction on the cigar is very solid as well, and it is producing a nice fairly even burn line that has a lovely light gray ash that is holding on firmly to the cigar. Overall it is an enjoyable cigar. I would say it is an evening cigar for the most part, but is a cigar I could smoke in the afternoon depending on what I was looking for. 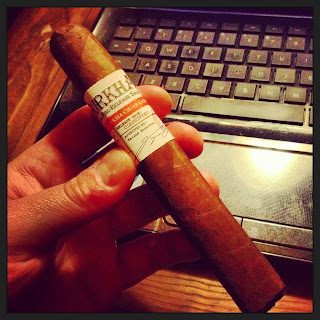 I am in the second third of the cigar now, and the cigar is remaining fairly consistent and similar to the first third. For the most part the cigar is showing some strong tobacco notes that are accompanied by bits of leather and spices, but there is also this definite black pepper flavor profile present with the cigar. I am getting some subtle toasted nut notes in this third, and I would say the body of the cigar is right between medium and medium full overall. The strength of the cigar is really at the full strength level, and in some ways is a cigar that focuses more on the strength than the flavors. Looking at cigars by Gurkha, I would say this cigar is one of the stronger cigars Gurkha has released, and they tend to be reaching out to the more experienced cigars smokers with their releases lately. The construction is still as consistent as it was in the first third, and it is producing a fairly even burn line with a nice light gray ash. In the final third of the cigar now and the flavors are really similar to that of the second third. I am getting those lovely toasted nuts, tobacco and leather flavors to the cigar, and it is showing those strong pepper, spice and oak notes with the cigar also. The cigar is not very rich or earthy, but dryer and fairly strong. I would classify the cigar as a summer cigar, and more specifically a summer evening smoke. With a medium full body, the strength level is really on the full side of the spectrum, and is a nice cigar to close the evening with after a big meal. The construction to the cigar is still top notch, and it is smoking consistently well with the first and second third. The ash is keeping that light gray coloring, and it is fairly firm on the end of the cigar. The burn line has kept that nice even line and it has produced a good amount of smoke as well. I smoke the cigar down to the nub, and on the final draw the cigar is cool, strong and enjoyable. 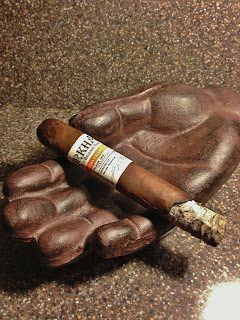 This cigar was a lot stronger than I expected. I felt that it offered a consistent core flavor profile that was enjoyable while showing some nice strong tobacco notes. You can definitely tell that the cigar is composed of a lot of ligero tobacco, and with the larger ring gauge you are getting more of it. Looking at the ring gauges this cigar is being offered in, it is no surprise that this cigar is being offered in a larger format so that it emphasizes the use of ligero tobacco in the filler. The cigar was crafted to be stronger, and to show a lot of the filler tobacco flavors and strength. I think it is a perfect cigar for the market right now, and will be a successful release for Gurkha and East India Trading Company. Looking back on the Gurkha smokes I have had recently, this is the strongest of them all. I would like to try this cigar with a smaller ring gauge, but this smoke gets a solid 89 in my book.