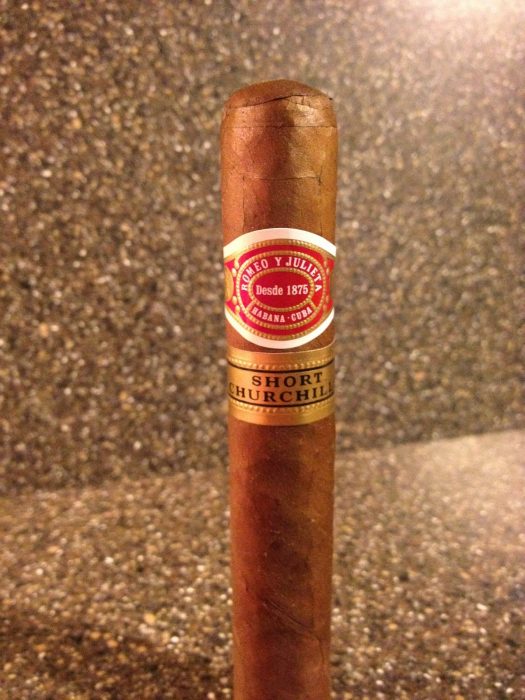 My main man TBone asked Catfish and I to review this well known robusto and provide our thoughts on the smoke. I informed him that I was not the largest fan of the smoke, but I would give it the respect and go into the review with an open mind. I am here today to share those thoughts and who knows, I will either get TBone’s approval or some hate mail. Summing that all up, and skipping my usual long introductions, let’s take a look at the Romeo y Julieta Short Churchill.

In 2006 Habanos S.A. announced the Short Churchills. It was the follow up “Churchill” release to the brand and it was the first regular production robusto ever for the brand. There was a robusto used as a limited editions in 2001 and a robusto selection crafted in 2003, but nothing consistent and regular until 2006. The Habano features the classic Romeo brand, and also featured the secondary gold band that says Short Churchill. Since its conception the Habano has been offered in three count tubo packages, ten count boxes and 25 count boxes. I have probably been smoking the Habano since its conception and have worked my way through many ten count boxes. The Habano is made from tobacco that hails from Vuelta Abajo and production is coming out of La Corona  and the H. Upmann Factory. The Short Churchill measures 124 mm (4.9″) and has a 50 ring gauge. The Habano features a beautiful triple cap and has a great Colorado coloring that is fairly dark. There are few veins present on the wrapper and it has an aroma of rich Asian spices, soft cedar and oak notes, musty tobacco and some cherries as well. 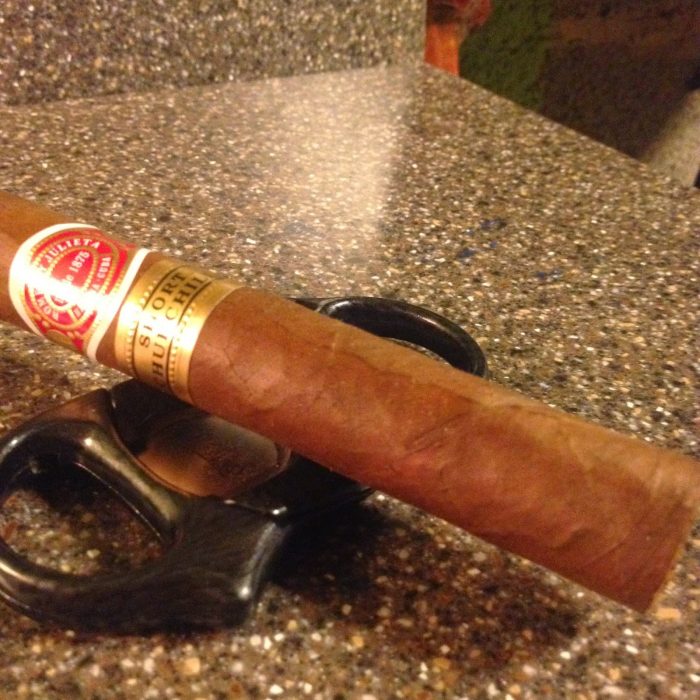 The first third open up by showing some solid tobacco and oak notes. I am picking up some strong Asian spice qualities with that, and it is followed by this soft coffee bean flavor. There are some very soft cherry/stone fruit notes with the smoke as well but they are not as present as they are in other vitolas in the brand. The construction is decent with the smoke, a majority of the smoke is smoking even, but I have an area of the wrapper that is burning a little bit slower than the rest which is making it a pain in the rear end. I corrected it a couple of times, but it continued to pop up. The ash has that dark charcoal coloring, typical for a Romeo, and it holds on fairly well. In terms of body and strength, I would say the body is around a medium to medium full level and the strength is right there as well. So far, a smooth smoke that is fairly enjoyable and tasty. 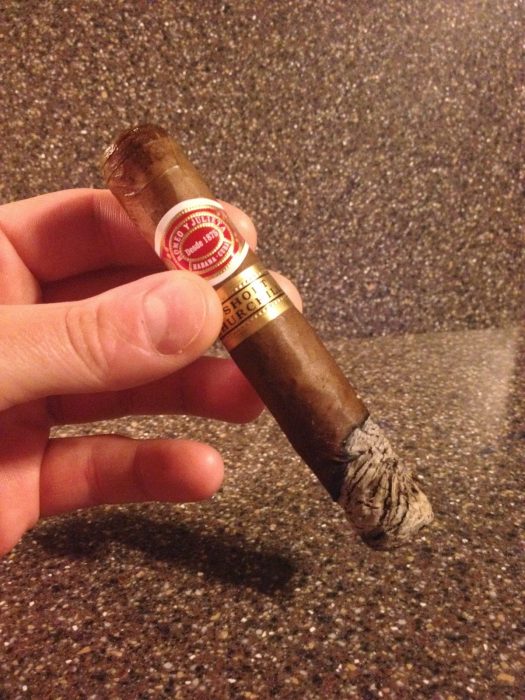 When I get into the second third of the smoke I find that a majority of the flavors are fairly consistent with the first third and it is producing some nice tobacco and Asian spice notes. I am getting that wooden flavor as well, and it is more oaky in this third rather than smoking with some cedar notes on top of that. The coffee bean flavors are present on the finish and they are accompanied by some dark cherry notes that are a little bit stronger than the first third. The construction continues to smoke at a similar level to the first third and it has a little bit of an uneven burn, if you look at the total area with the small uneven area, and it has that darker charcoal ash holding on well as it did with the first third. The draw is fairly tight, something I like, and the smoke production is at a decent level. The strength and body smoke at a medium full level in this third and to me it is a classic Romeo y Julieta strength and body level. 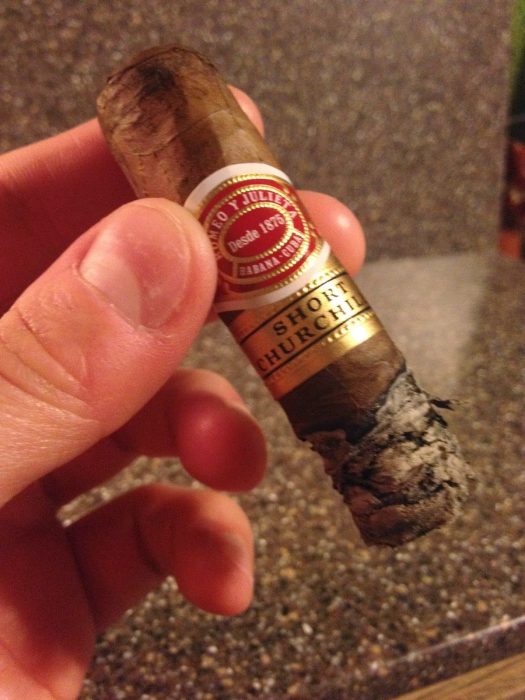 I am in the final third of the cigar now and as the second third showed, the spice and oak notes are very prominent and it is showing those Asian spice flavors on top of some dryer oak notes making for a strong summer flavor profile. The coffee bean and cherry notes remain soft on the finish and it adds for a nice bit of complexity overall to the blend. The finishing flavors are fairly consistent with the blend from the beginning, and while they are not overly complex, they are fairly entertaining. In terms of construction, the smoke gets a lot better in the final third and it is showing an even burn line now with a firm charcoal ash on the end of the smoke. The draw is still perfect on the stick and it is a cool smoking experience. The final body and strength are at that medium full level from before and it provides for a nice finish that makes it easy to smoke another one directly afterwards. 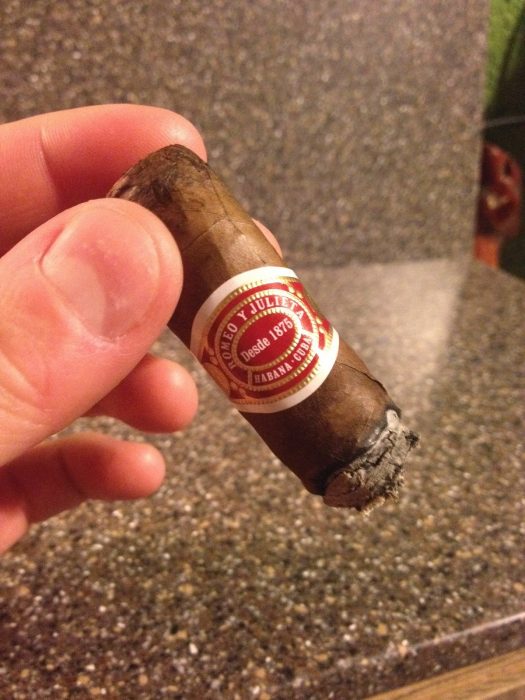 The Short Churchill is a solid robusto and a nice offering from Habanos. I think it was a smart addition to the brand and it probably did a lot for the brand from 2006 to 2010. I think the Wide Churchill is probably grabbing the attention know, along with the Petit Churchill. Is this my cup of tea? No, it is not and it probably never will be. I have smoked aged one and young ones, and for some reason the flavor profile in the robusto does not speak to me as other Romeo smokes do. I think the Churchill is great, especially with age, and the Wide Churchill is a nice addition as well. The stone fruit and cherry notes seem to be less in this smoke and I think those are the flavors that really make the brand. I often find this Habano to have a more natural flavor profile and focus more on wood, spices and tobacco. I would probably give this Habano a 91-93 with age, but right now I am going to have to give it a rating between 89 and 91. 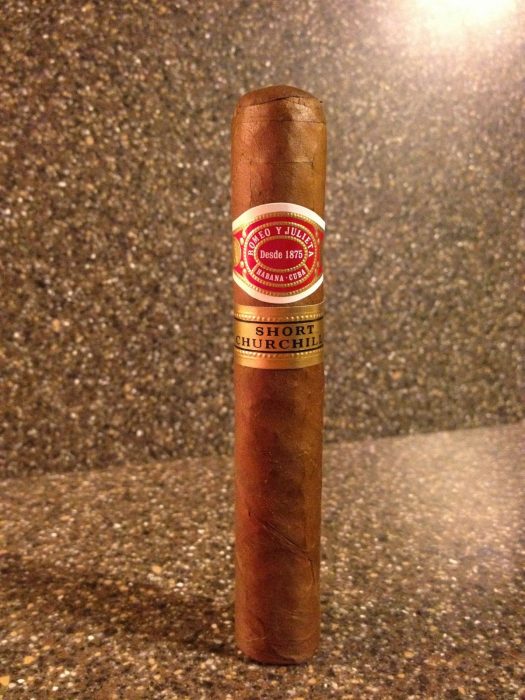