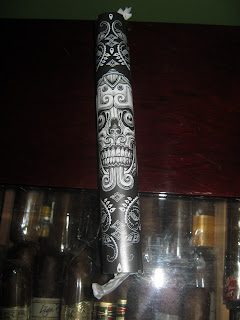 When it comes to attractive boxes, awesome bands, great cigars, and overall spectacular creativity Matt Booth and Room 101 Cigars is most likely at the top of the pile. In the past two years, he has released cigars that have enticed smokers to pick them up because of the quality cigar they possess, and because of the packaging as well. Room 101 Cigars has definitely come a long way since it entered the market, and these past two years have shown great signs for their future. The Namakubi line has become a personal favorite of mine, and many I know, and I believe this line to be the line that puts him on the map. Like the Tempus did for Alec Bradley Cigars, this will be the line that will take them to new levels. With great success like the Namakubi, we turn to his latest release O.S.O.K.!

One Shot One Kill. It seems fitting that a cigar with this name is released by a manufacturer who was once a United States Marine. If this were released by anyone else I am not sure how appropriate it would be, but With Matt Booth it is right on the money. The line continues to hold those Eastern influences that the companies past lines possess, and manages to capture the name in the vitolas. Shaped like bullets in motion, the three vitolas are all figurados, and make me think of Marine Snipers picking off their targets throughout the world. With clever names for the vitolas like, chignon “a real bad ass”, Filero “knife”, and Trucha “trout or vigilant in slang”, the cigars are packaged incredibly.

Wrapped in a decorative paper tube that displays an image of a skull with eyeballs and surrounded by paisley decorations and smaller skulls the cigar is incredible. Once you remove the paper tube you get a tissue paper wrapper that wraps the cigar like a candy bar. Only after all this wrapping do you get the great figurado with a simple band saying “O.S.O.K.” The wrapper to the cigar is Ecuadorian Habano, and possesses a Honduran binder that is Corojo seed and seco priming’s. The filler tobacco consists of Piloto Ligero from the Dominican Republic and Corojo tobacco from Honduras. For this review I am smoking the Trucha, which measures 6 ½” in length, and has a beginning ring gauge of 19, middle ring gauge of 50, and finishing ring gauge of 30. The wrapper has an “old” look to it, with veins present and some tooth here and there. It is light brown in coloring, and I would say it falls into the Natural area of coloring. The aromas are faint to the nose, but I am picking up some wood, leather, spice and mineral notes.

AS I light up the cigar it has a slow start, but once the ring gauge begins to increase I get more and more flavors. There are some definite spice notes present in the cigar, and it really is a combination of so many spices. There is a bit of pepper here, and some cinnamon there, but it is really complex. I am getting some definite wood notes, cedar and oak, and also this mineral and herbal quality. There is some salt and natural dirt taste to the cigar, but also some herbs as well. It is a very complex cigar, and it is not so much rich but dry on the finish. I would say the strength of the cigar is at a steady medium, and the burn line has been very nice leaving a dark gray ash. It is producing a good amount of smoke, and it is perfect for smoke rings.

When I get into the second third of the cigar there is a nice transition of strength. I am getting more of a medium full level in terms of strength in this third, and with every puff it is getting stronger and stronger. There are still lovely flavors present with the cigar, and I am getting those unique mineral and herbal notes. There is an emergence of leather in this third, and the wood notes are very potent in this third as well. You can say that the flavor profile is similar to that of the first third, but it is a very complex flavor profile. The burn line really got to be razor sharp in the second third of the cigar, and the ash has been holding on to the end perfectly. As in the first third, the ash has remained dark gray in coloring, and the smoker very thick and aromatic.

I am in the final third of the cigar now and the spice level has returned in full force. There was some spice notes present in the second third, but it played a lower profile then it did in the first third, but it is back now. The strength of the cigar is full in body, and I loved that this cigar started off fairly light and increased all the way towards the end. The herbal and mineral notes were still present, though faint in this last bit, and the finish of wood and leather were also still very active on my palate. The burn line was fairly good in the final third, not as great in the second third, but still solid, and I am holding onto a great long dark gray ash. I smoke the figurado down to the tapered nub, and on the last draw it is still cool and unique.

This was a great cigar, and though very different from the Namakubi line, still very enjoyable. I loved the dry finish to the cigar, and the flavor profile was very enjoyable. Both of the latest two lines by Matt Booth and Room 101 Cigars have been phenomenal, and are slowly becoming staples in my humidor. The O.S.O.K. Trucha is fabulous cigar that shows great flavor characteristics, and smokes wonderfully as a cigar in terms of construction. If you are a fan of the Namakubi line then you will definitely love this cigar because of its unique characteristics. I think these past releases by Room 101 have really shown flavor profiles that we have not commonly seen in cigars for some time, and it really pays tribute to excellent blending and tobacco use. This cigar is going to be a personal favorite of mine, partly because of the figurado shape, and I give it 92 points. If you are a fan of figurado cigars, you should give this cigar a try, and if anything buy a couple because of how cool the packaging is. This is a cigar that if you buy it because of the packaging you will also get a great cigar!

I told Havana Phil he needs to get Matt Booth to make him a ring like this band with Onyx and Platinum!