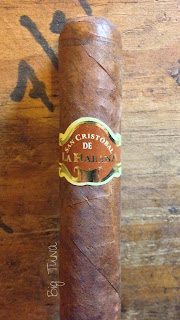 I give Catfish props for getting me hooked on El Príncipes from San Cristóbal, and since smoking the one size I have wanted to branch out and try more offerings in the brand. I never got around to it, got tied up with other important things, but today I am looking at the other vitola offering that sparks my interested, and that is La Fuerza. The brand itself has always been one that is a cross between two brands, and it is one of the more modern brands that I can get behind. I enjoy Vegas Robaina very much, that is my first choice when picking a Habanos brand from the 90’s, but after that I go with San Cristóbal de la Habana. The brand pays tribute to the great city of Habana, and the four lines in production pay tribute to the four forts in the city. La Fuerza takes its name from the fort, Castillo de la Real Fuerza, and it is considered to be the oldest stone fort in the Americas. Let’s see if La Fuerza does the old fort justice.


One of the original four vitolas that are still in production, La Fuerza was introduced in 1999. The Habano is a robusto extra in definition, and it is classified as a gorditos in the factory. It measures 141 mm (5.6″) and has a 50 ring gauge. It is composed of Vuelta Abajo tobacco, and is made at La Corona. La Fuerza has a dark wrapper and it is a wrapper shows very little veins. The coloring is that of a dark Colorado, and it is just shy of being Colorado Maduro in my opinion. The texture is fairly soft and it has a nice fine grit texture. The Habano is firm throughout and it has a nice triple cap. The foot is giving off an aroma of tobacco, hay, cedar, and spices, and the wrapper has a nice earthy, spicy, and tobacco aroma. The cold draw is slightly snug, but it is perfect for me, allowing for a slow smoking experience.

The first third opens up by showing some strong spice notes and it has some damp wood and tobacco qualities with that. There are some herbal and grassy qualities thrown in the mix, and it has a smoky and creamy finish. Soft coffee notes are present as well, but they are fairly faint. I can tell that the Habano is slightly young, but it has so much potential with what is being delivered right now. In years, this Habano will smoke great, and it just needs a little rest in a low RH setting. The construction currently is solid and it is showing an even burn line with a nice charcoal ash on the end. The draw is cool, though slightly snug, and producing a decent amount of smoke. I would classify the Habano as being medium to medium-full in body, medium in strength, and having a medium-full flavor profile. So far, a nice beginning and I look forward to the second third. 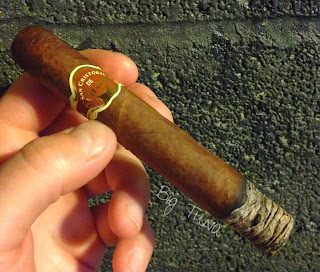 I am in the second third of the Habano know and I am finding that it is delivering a lot of damp tobacco, barnyard, and spice flavors. It has lost some of the qualities that were present in the first third and there are few defining flavors present in this third. You can tell age is needed right now, and there is no point in smoking anymore at this age. The body and strength are at a medium level right now and that is where the flavors are as well. The construction is not as good in this third as it was in the first third as well, and it has been showing a wavy burn line and has needed to be touched up a few times. The ash is flaky on the end and it has a dark charcoal coloring.The draw is cool though and producing some decent smoke when it is drawing well. It does not have a tight draw, but just needs to be lit up often. 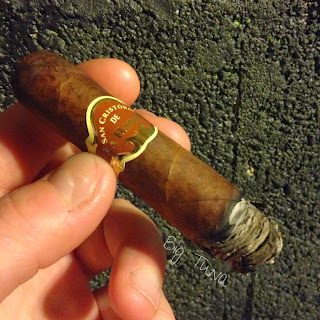 The final third shows a slight bit of resurrection for the Habano, but overall it is not showing much improvement. I am picking up some more distinct spice notes in this third and some coffee qualities with that. There are still those flavors of damp wood and damp earth present as well, and it has a smoky and creamy finish on top of that. It is smoking at a level between medium and medium-full in terms of flavors, and the strength and body are at a level just above medium in this third. The construction shows some improvement overall and it has a fairly even burn line with that dark charcoal ash on the end. The draw is cool, giving off a decent amount of smoke, and I smoke the Habano down to the nub before it gets soft. Flavors are faint in the end, but it is showing some definite tobacco notes.

Looking back at La Fuerza and the samples I smoked, this is not a size I would come back to or recommend. In fact, the only other offering in the brand that I have smoked is El Principe, and I would tell people to only give that offering a try in the line thus far. Age is definitely needed for this Habano, but it just lacked a lot of good characteristics that a young Habano needs to really age well. El Principe shows greatness right out of the gate, and with age they keep getting better and better. I have always said that this brand is a cross between a Montecristo and Hoyo, and I stick to that with this Habano. There is a nice creaminess and cedar present, but there is also this smoky, coffee, and earthy quality present with the blend. I know a passionate Habanos smoker asked my opinions and whether or not he should try them out, and all I can say right now is no. Now, if you get a good one, let me know and I will come back to you. Young rating right now is between an 85 and 87, with an age rating between 88 and 90.