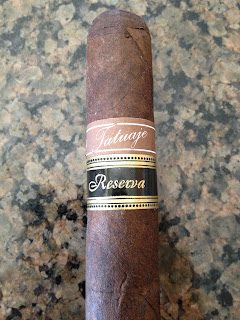 It has been ten years since the cigar industry was introduced to Pete Johnson and Tatuaje. I have paid attention to his rise from the early years, and I can say that he has done an incredible job and still is. Beginning as a cigar buyer for the Grand Havana Room in Los Angeles, CA to having a successful brand with multiple lines is incredible. He entered at a time where it was not as easy to enter the industry and has done wonders since. This all happened when he sat down with a man, José Garcia, in the attempt to create a line that was Cubanesque. He wanted to truly create a line and not just have a cigar made for him and then put the cigar bands on. It is safe to say that he has and still accomplishes this process with every release he brings to the market. In the beginning his cigars were being made in Miami, Florida at the famed El Rey de los Habanos factory but eventually, due to expansion, he was having cigars made in Miami and in Esteli, Nicaragua, Tabacalera Cubana S.A. Today Tatuaje Cigars are made at My Father Cigars S.A. in Esteli, Nicaragua, but no matter where they have been made throughout the years they have always remained under the watchful eyes of José Garcia. To honor these ten great and successful years Pete is re-releasing existing lines and also creating some new ones. One cigar that he is re-releasing is the Regios Reserva.

Originally released in 2009, and in very limited quantities, the Regios Reserva was a cigar that was a tweaked version of the core line Tatuaje Seleccion de Cazador Regios. The core line consisted of Nicaraguan fillers and binders with an Ecuadorian Habano wrapper, but the Reserva version had a Connecticut Broadleaf wrapper; this has been the case with the 7th Reserva and the Noellas Reserva as well. The cigars are great examples of how much a cigar can change with a new wrapper applied, and it is also incredible to see how great the cigar still is with a different wrapper applied. It has been a long time since I had a Regios Reserva and to be honest with you I can not give you an adequate writing of my experience other than the fact that it was rich and full bodied. The cigar is going to be released in two shipments, March and November/December, and I know these will do very well. 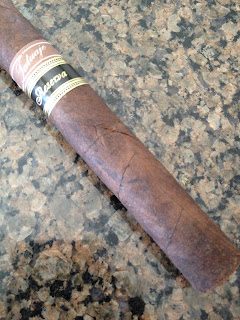 The Regios Reserva begins with a Connecticut Broadleaf wrapper and is composed of Nicaraguan fillers and binders. It is the Seleccion de Cazador blend, but with a Connecticut Broadleaf wrapper. The cigars are made at My Father Cigars S.A. in Esteli, Nicaragua, and are made in the Cuban fashion. It measures 5.5″ with a 50 ring gauge and is a little bit longer than your standard robusto. The cigar is not gorgeous in appearance, the wrapper has some visible bumpy veins, but I bet it has tons of flavors. It is slightly firm to the touch with a rough texture, and it has an aroma of cocoa, spices, rich earth, leather and oak. There is a great cold draw to the cigar and it is showing some nice flavors. I can tell that this cigar is going to have power and rich flavors, and I look forward to lighting this baby up. 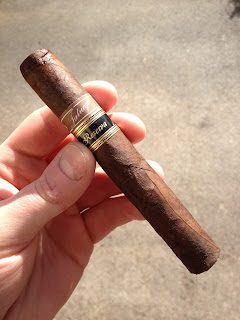 The cigar has an incredible beginning to it, and it shows the classic Pepin pepper blast with those Pete Johnson Connecticut Broadleaf flavors. There is a ton of black pepper and spices showing up with some some oaky and coffee flavors. It also possesses some great leather flavors on top of that and has a sweet finish of cocoa and rich earth. There is no doubt the flavors with this cigar are full tilt, and it is accompanied by some full body strength too. Full body in ever way the cigar is tremendous and is performing wonderful in terms of construction too. The burn line is razor sharp on the cigar and it has a thin burn line with that. The ash is this solid charcoal coloring and it is producing a nice amount of smoke with each draw. It is definitely showing a great start as a cigar. 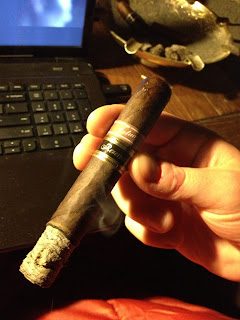 I am in the second third of the cigar now and the flavors have become somewhat softer but still tremendous. There is a nice sweetness to the cigar which is showing bits of tobacco to it, and the chocolate and rich earthy notes are much more present than they were before as well. There are still those leather and oaky flavors with the cigar that are adding some nice balance, and it has a nice spicy and peppery finish. In terms of strength I will still say that the cigar is full body, but in this third it seems to be softer than before. If it was a ten out of ten before, I would say the cigar is at a level between eight and nine. The construction on the cigar is still terrific and producing a solid charcoal ash that is holding on firmly to the cigar with a razor sharp burn line. 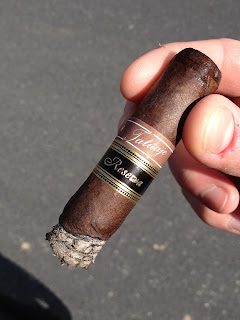 When I enter into the final third I find that the flavors are fairly similar to that of the second third but the strength level has increased from before and the flavors have made a shit in where the focus is. There is a nice bit of coffee, oak and leather showing up to begin with, and it is then showing some tremendous spices with pepper notes. I am getting some tobacco, earth and cocoa sweetness to the cigar still, but they have taken a back seat in some ways. The sweetness is present on the finish, and it is a nice touch there with the strength of the cigar. The strength is finishing at a full body level in this third, and the last draw to the cigar is full bodied and full flavored. There is still an even burn line to the end, and the charcoal ash holds on firmly to the nub.

This was a terrific cigar to bring back to honor ten years in the industry. The cigar possesses an incredible strength level that is terrific for experienced cigar smokers and also has a nice rich and dark flavor profile that is tremendous as well. The construction from the beginning to end was fantastic and it produced a solid gray ash that was firm on the end of a perfect burn line. The wrapper on the cigar is not the prettiest of wrappers, but it possesses some incredible flavors and at the end of the day that is the most important quality. I think it is a terrific robusto and a great example of a cigar utilizing a Connecticut Broadleaf wrapper with some serious strength behind that. I give the cigar a 92 and I am going to get my hands on as many as possible. If you are a Tatuaje fan and have not had this cigar you need to pick it up. 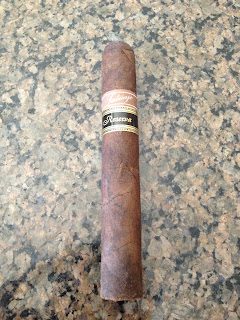