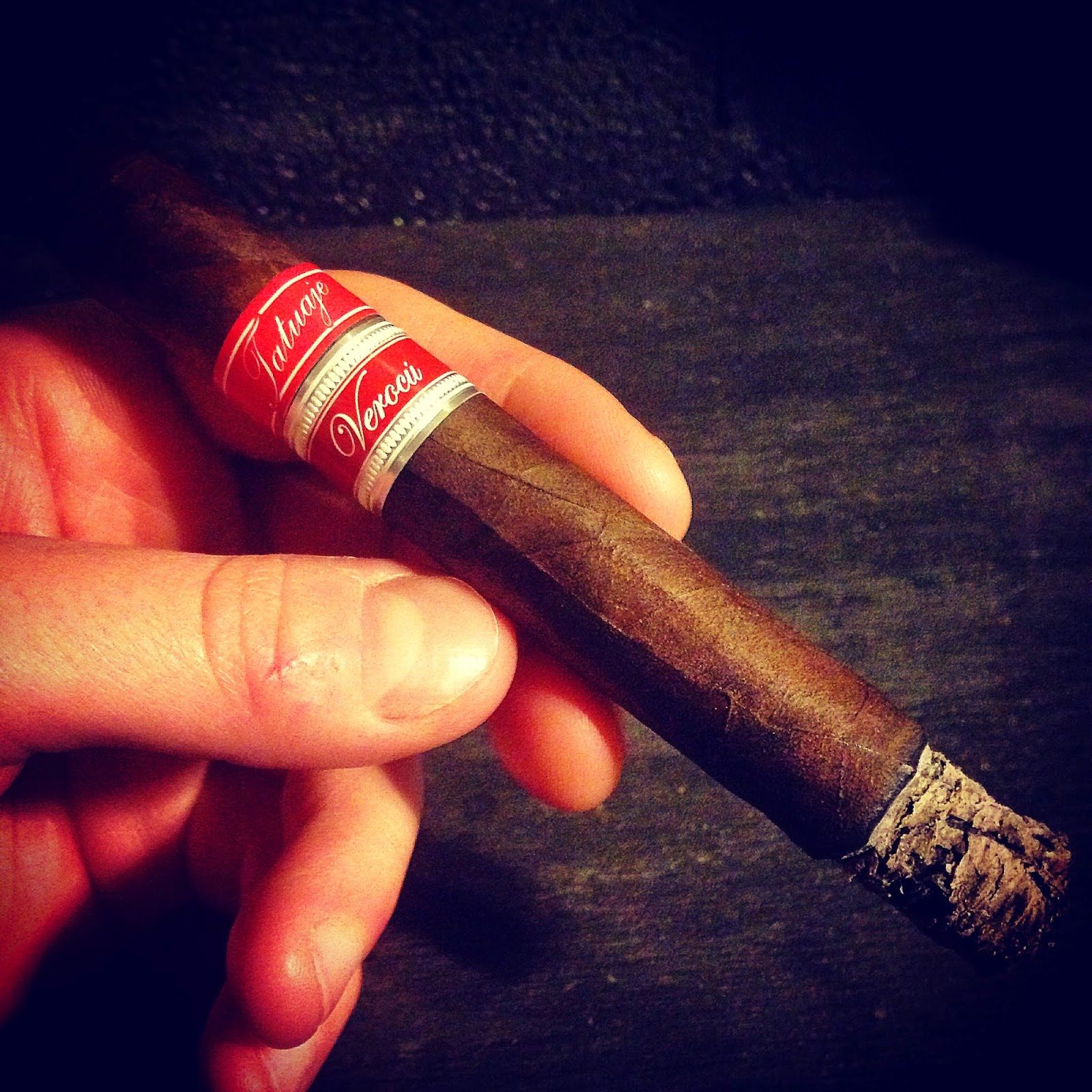 In last year’s Saints & Sinners kit, Pete include two vitolas that were the Tatuaje Verocu. They were the only two cigars that were easily identifiable, and it was a nice addition given that Pete announced the Verocu line would be making a return at the 2014 IPCPR. To be honest, it had been sometime since I actually smoked a Verocu, and on top of that, it had been even longer since I smoked a Havana VI. As many know or have heard, Pete has referred to the Verocu as the “Havana VI on steroids,” and in my experience it was definitely a stronger and improved version of the line. I looked forward to smoking the cigars in the set, and this review could not have come at a better time with the Verocu getting a soft launch this week. The Verocu that is getting a soft launch is not this size, it’s actually 3/8″ longer, but let’s see how this version smokes. 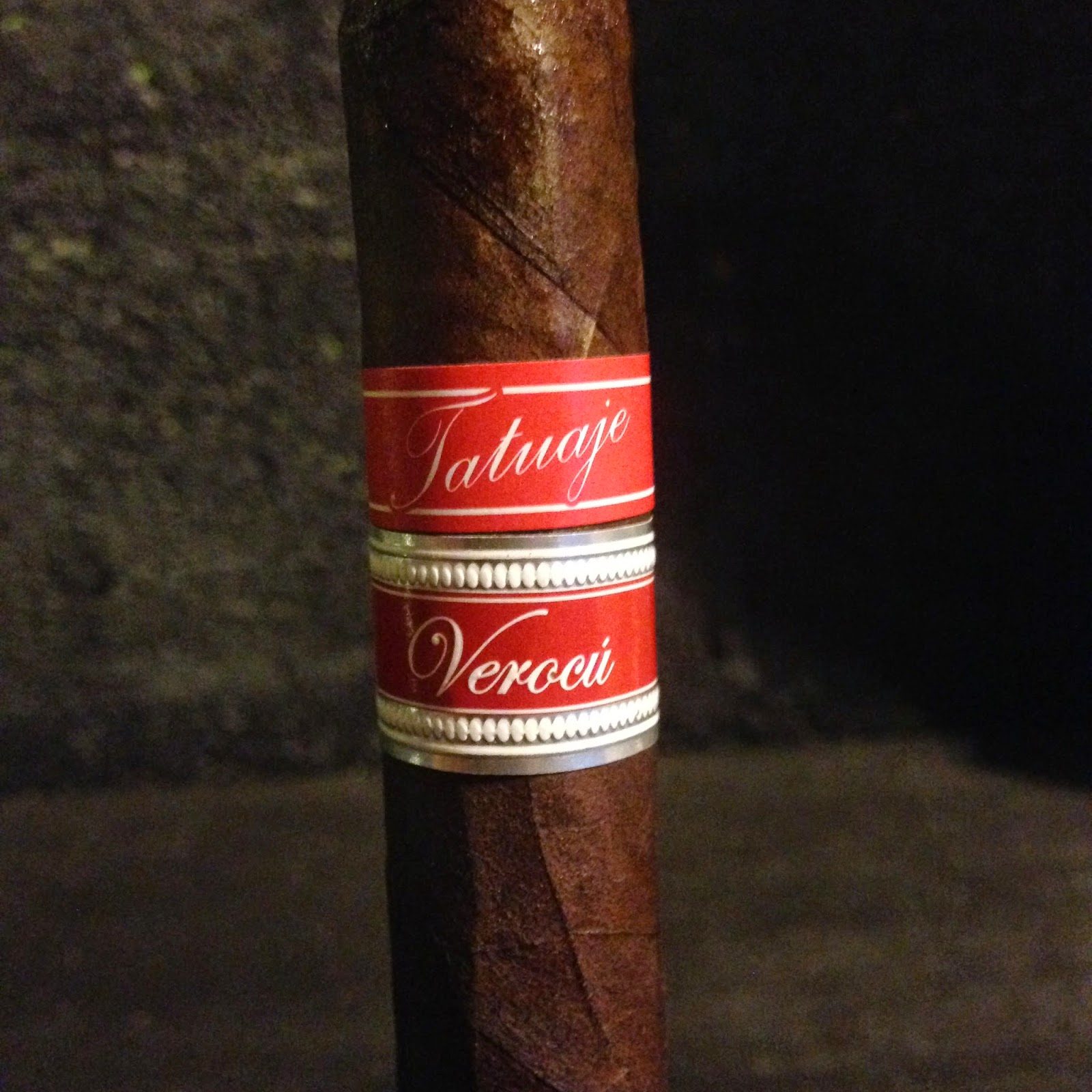 This particular size offering was only avialable in the Saints & Sinners kit, but it is close in length to the Verocu No. 3 being released this week. This cigar measures 5 5/5″ with a 46 ring gauge, and it is finished with a Habano seed wrapper from Ecuador. Underneath that is Nicaraguan tobacco in the binder and filler blend, and production came out of My Father. The cigar features a dark Oscuro wrapper, and there is a nice placement of the triple cap to finish the cigar. It has a variety of veins throughout the cigar that range from minor to large, and the wrapper is thick and hearty. It has some oils present, and it has some tooth with that. There are a couple areas where the veins in the wrapper present this bumpy and uneven field, but overall it is not a major issue. There is an aroma of rich spices, strong earth, and heavy tobacco on the foot, and the wrapper is showing some similar qualities with some oak and leather notes. 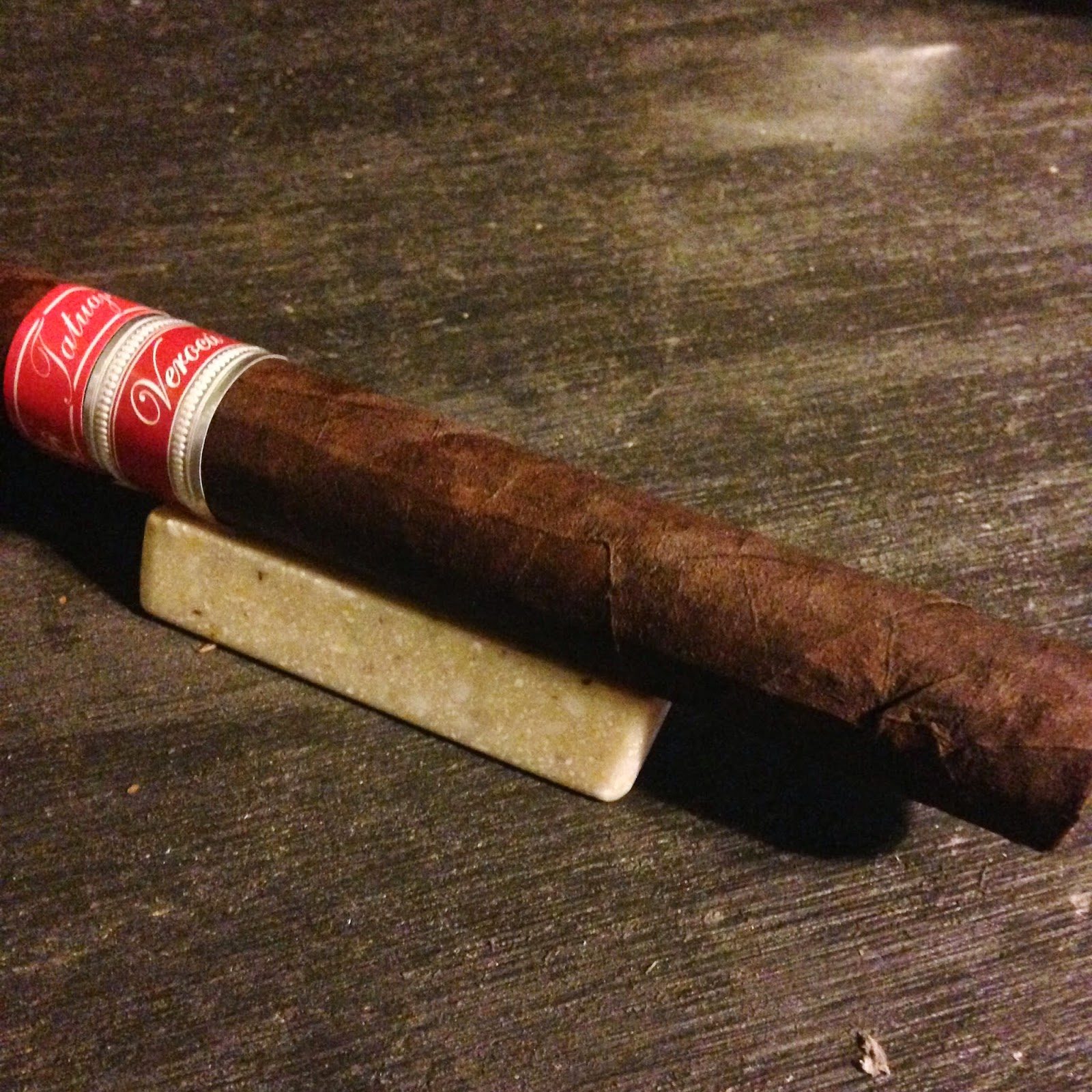 The first third is a powerhouse, and it has some great flavors with that. There is a nice bit of coffee grinds making an appearance at the beginning, and it is accompanied by some strong black pepper notes on top of that. I eventually begin to get some oak and red wine qualities, and it has some earth and leather on top of that. It is very filling, and it has a nice bit of depth on top of that. The complexity is at a good amount, and it is matching the strength and body with the cigar. I would say the body is at a medium-full to full level, and the strength is “full-on full.” It is all working together wonderfully right now, and I look forward to where the second third takes me. In terms of construction, the cigar is perfect and it is showing a dead even burn line with a light charcoal ash on the end. The ash is holding on firmly, and I am getting a draw that is cool and producing a nice bit of smoke. 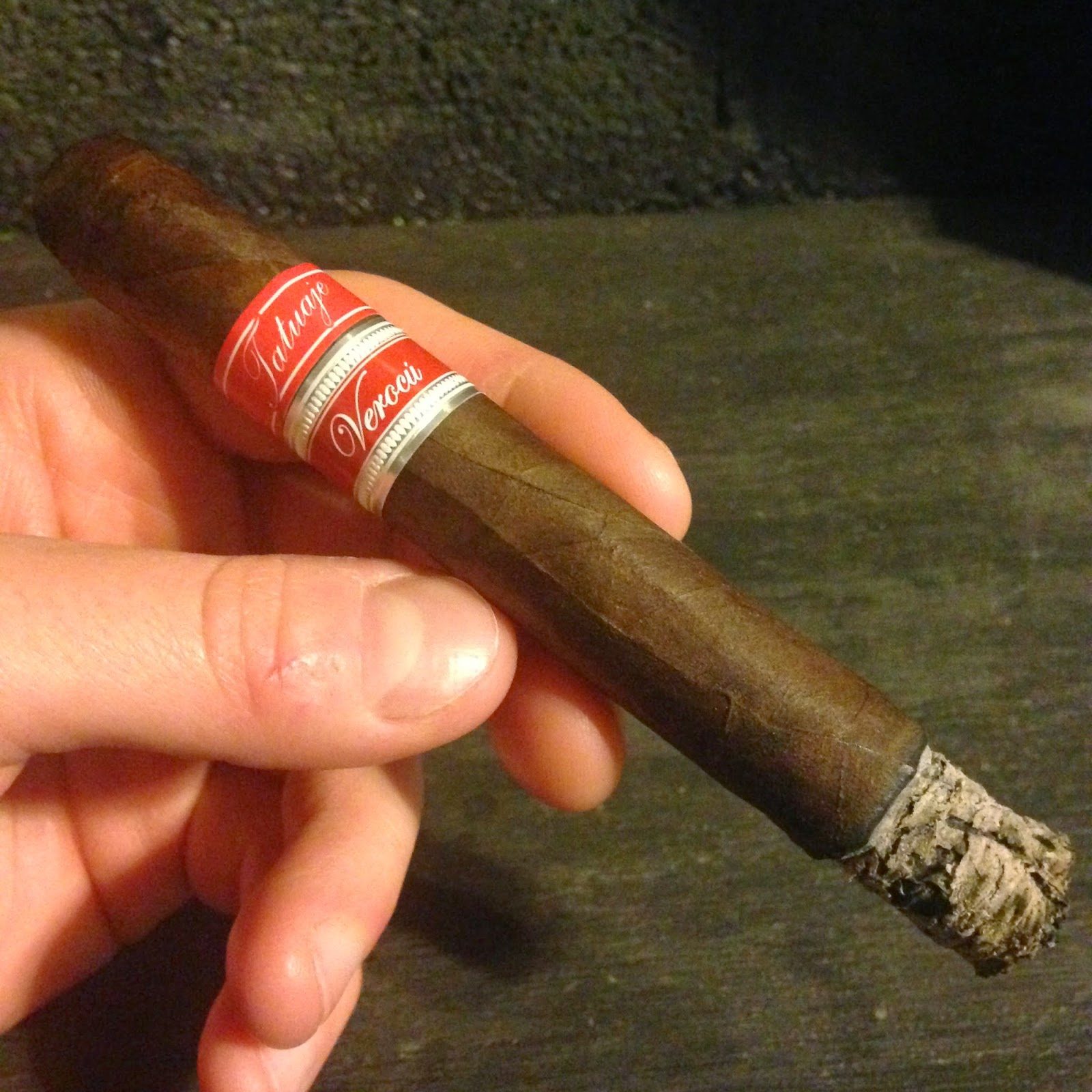 I am in the second third of the cigar now and I am finding that it is balancing out some and while it is still full in all aspects, it is more balanced and a smoother smoke because of that. I am getting those black pepper notes along with the oak flavors, and it has a nice earthiness present as well. There are some smooth black coffee flavors present on the finish, and there is some leather on top of that which makes for a nice touch. The construction remains perfect in this third and it is showing that even burn line with a firm charcoal ash on the end. The draw is smooth, producing a great smoke cloud, and it is a cool finish. I would classify the cigar as being more medium-full in strength and body in this third, and I like the direction that the cigar is going. It caught my attention early on, and it is now toning it back some as to not overkill me. 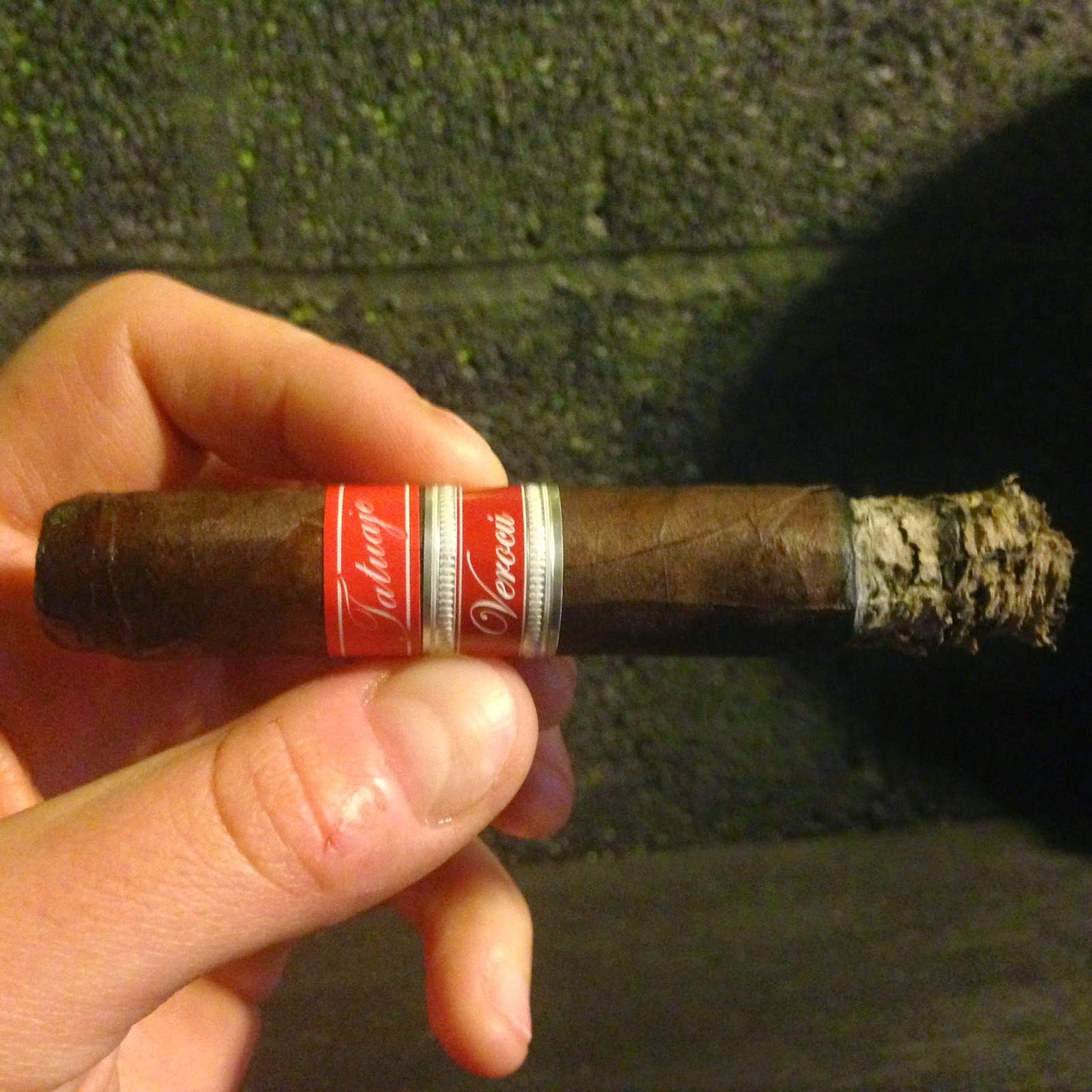 The final third shows a lot of qualities that are similar to the first third, but it comes off as being softer than the second third. I am getting very little pepper notes, and the coffee bean flavors are muted as well. It has an oaky and earthy quality in the end, and with that is some nice natural tobacco flavors to add some complexity. I think the first and second third flavors were more my cup of tea, but that has to do with the strength and body present. The strength and body are a less in this third and they are really smoking more around the medium level in my opinion. It has decreased in that sense as the cigar has moved on, and while it is “easier” for the smoker, I think it loses some of those awesome qualities. The construction remains solid though in this third and it is producing a decent burn line with a darker ash than what was present before. The draw is cool, and a little wet as it comes to a close, but it is showing some earthy flavors on the finish.

The Tatuaje Verocu is a nice smoke and a better offering than the Havana VI in my opinion; I think many others agree with that though. I don’t think it is as good as the “Brown Label,” but at the same time it is a very different smoke. I have always been curious about the relationship between this cigar, the Brown Label, and Havana VI, and the reason for that is that Pete has been very vocal in saying that the Havana VI  is a toned down version of the Brown Label, and the Verocu is an amped up version of Havana VI. Most people’s first reason would be to relate Verocu and Brown Label, but the two are completely different. I think Verocu is the stronger of the three, since I am relating the three cigars now, and while the flavors are not as good as they are in the Brown Label, they are better than they are in the Havana VI line. Other than that, the construction was solid throughout the cigar and it delivered a nice strength and body level. It did decrease in strength as the cigar progressed, but it became more accessible to smokers at the same time. This is a blend that I would love to have in a petit corona offering, but the corona gorda is solid as well. I am giving the cigar a solid 88 and it definitely has its place in the Tatuaje portfolio. 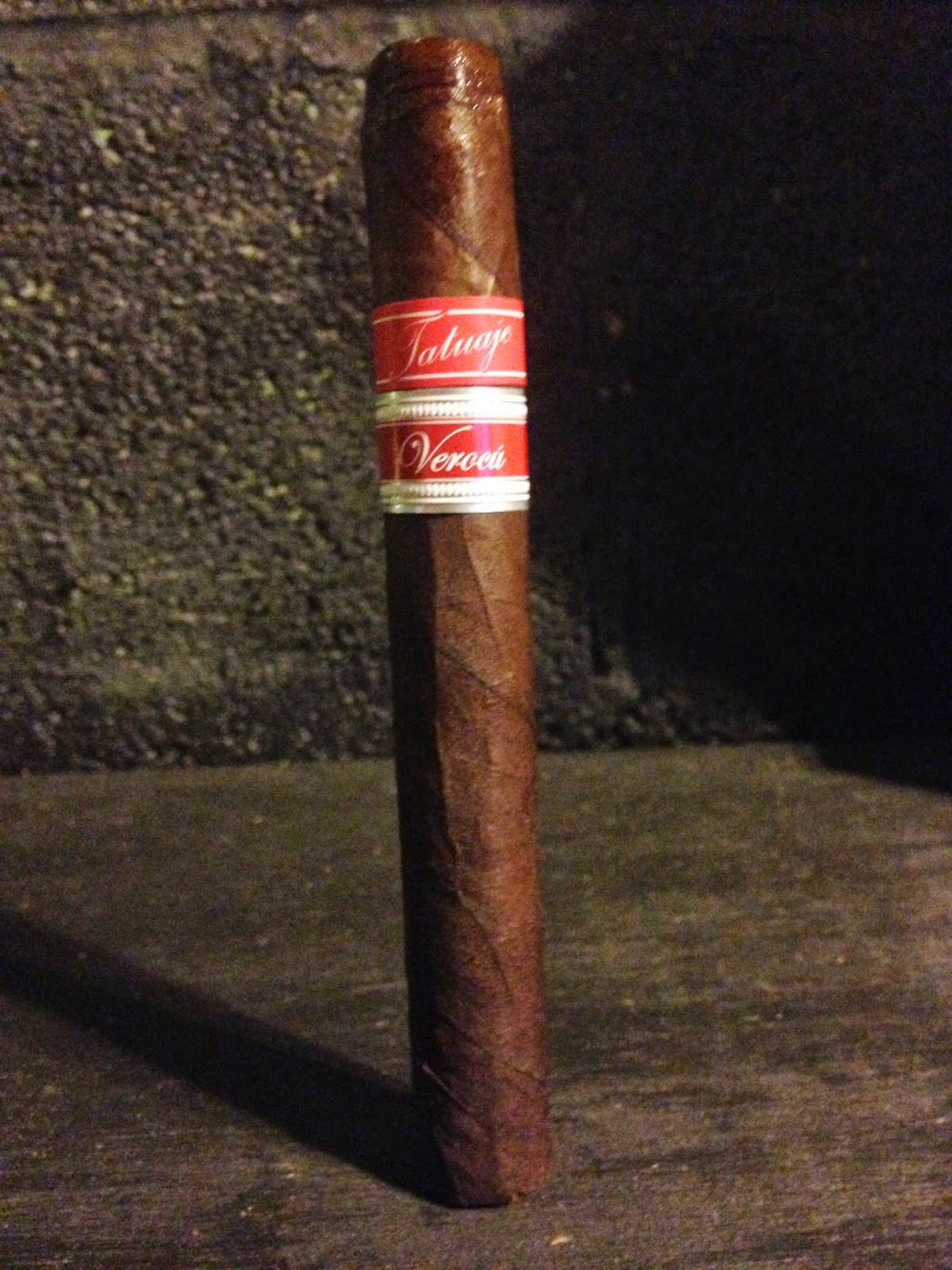