In the late 1990’s, Habanos S.A. announced four new brands to the market. It was the end of the Cigar Boom and Habanos S.A. was hot. A lot of companies out of the Dominican Republic, Honduras and Nicaragua earned a bad reputation for turning around cigars too fast, and while the same could be said about Habanos S.A., there was still some mystique to cigars coming from the island of Cuba. It was during this period that Habanos S.A. announced four new brands, and while they were released in different years, the release dates were fairly close in hand. One of the brands was Vegueros. The line mimicked in some ways the vitolas being released in the Trinidad and Cohiba brands, but it was a brand being made in the tobacco growing region of Pinar del Rio, and not in the capital of Habana. The brand continued on until 2012 when it was announced that the brand would quite literally be discontinued. The brand had crumbled from four offerings to two since 2010, and was truly limping on the way Diplomaticos currently is.

Eventually in 2013, Habanos S.A. announced that they would be resurrecting the brand and doing a lot of changes to it. Their goal was to create a new blend that spoke to the modern smoker, offering the brand in new vitolas, once again reaching out to the modern smoker, and also give the brand some new packaging. The older packaging was outdated and the brand needed a new look. The new cigar was unveiled at the Habanos Festival in 2013, and it was at the festival that it received a lot of attention. Shipment of the actual cigar was delayed, something that is fairly common with Habanos S.A., and the cigars just began hitting the market months ago. At the time, Habanos S.A. announced that the blend would be softer than it once was, and they were aiming to make a more medium body offering, while still using tobacco from the Vuelta Abajo region. Today I look at the second of three offerings, and I look at the Vegueros Entretiempos. 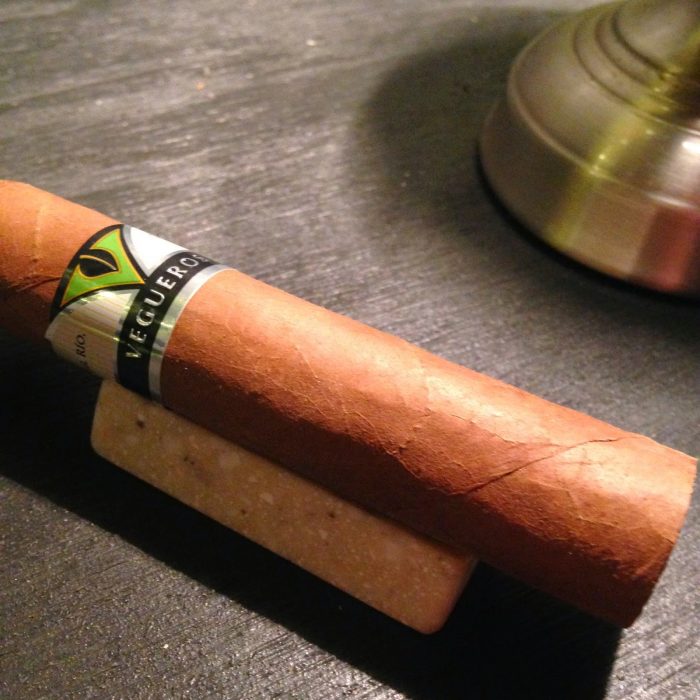 The Entretiempos is a lovely petit edmundo and is rolled quite well. It features a classic triple cap and it is applied well to the cigar. The wrapper have a lovely coloring, a solid Colorado, and the texture is smooth showing some texture from the veins throughout. It is firm from head to foot and it has an aroma at the foot of hay, sweet cedar and natural peppermints. The wrapper gives off a soft aroma as well and it is showing tobacco, grass and hay like qualities. Unlike a majority of offerings by Habanos S.A., this is not a Habano as it is not made in in Habana, Cuba, but is made in Pinar del Rio. It is actually rolled at the factory in that region, and that factory is called Francisco Donatién. This factory is where the Trindad brand is made as well, and it was at one time a prison. The Entreiempos is a petit edmundo and measures 110 mm (4.3″) with a 52 ring gauge. 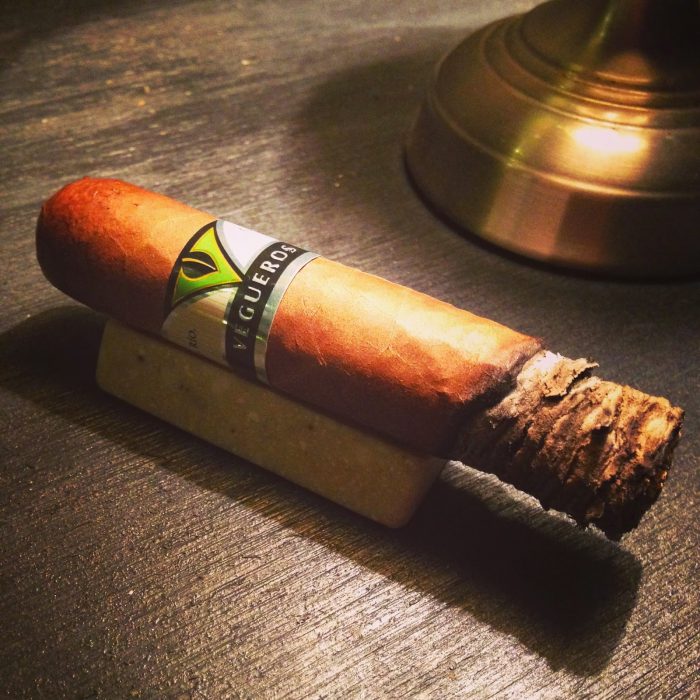 The first half opens up by showing some lovely flavors and it really has this summer and country like vibe to it. I am picking up some cream, hay and cedar notes, but it is also accompanied by this Anaheim pepper flavor that Catfish talks about with some fresh black pepper flavors on top of that. It is light and smooth to begin with, but it has a peppery finish which makes it more complex and really enjoyable. The construction is fairly solid with the smoke as well and it is showing a slightly uneven burn line with a nice charcoal ash on the end. The ash is holding on firmly and with that is a smooth draw that is producing a good amount of smoke. I would classify the strength of the cigar as being around medium right now, and the body is there as well. So far, I really enjoy this Vegueros and I prefer this blend to the original blends. 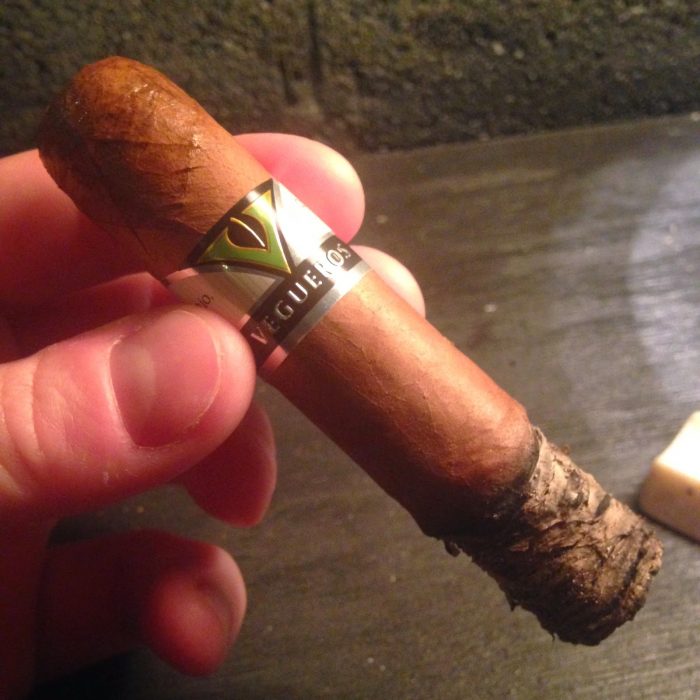 When I get into the second half of the cigar, it shows some transitioning and a little bit more youth with that. I am picking up with young grass quality which is typically a sign of youth, and it does not have that hay like flavor. There is a tobacco flavor present as well and it has a finish of harsh cedar, black pepper and Anaheim peppers. There is no creamy aspects in this half and while it is not bad, it is a young cigar. The construction however continues to perform wonderfully and it is producing a burn line that is fairly even with a nice charcoal ash on the end. The draw is cool overall and it is showing all the flavors from the cigar with no harshness. I would classify the body and strength to still be around the medium level in this half as well and it is a nice cigar for anytime of day in my opinion. I think with age you will be able to break this cigar down in thirds, but right now it is in halves. 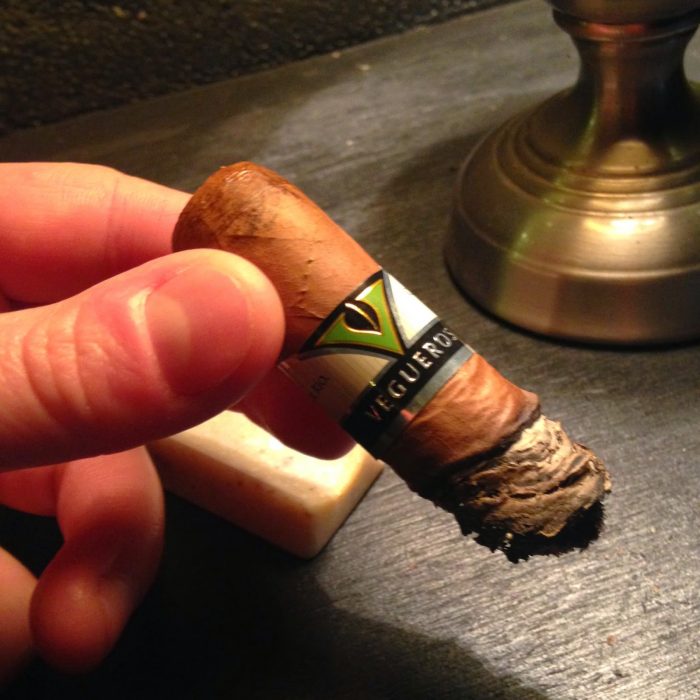 I really enjoy the new Vegueros and after smoking four of these Entretiempos in one day, I can say that I would stockpile these in my humidor. It is an easy smoke in terms of time commitment and it has a body and strength level that does well for me in the morning, afternoon or evening. I think a lot of smokers would enjoy the cigar and for some reason I believe that a lot of Dominican Davidoff fans would like it as well. It is definitely more wallet friendly than that Dominican brand, but what isn’t. From beginning to end the cigar smoked at a medium body level and the strength was there as well. It showed solid construction and held on to the ash well while offering a cool draw and a flavorful smoking experience. I found that it showed some nice creamy, hay and grass like qualities, but was balanced and made better with some additional pepper notes. If you find yourself able to get some of these, pick them up. They come in counts of 16 and are really affordable. They make for great lunch cigars or even a morning smoke. I am giving the cigar a solid 85-88 rating right now, but with age I believe it could hit the 90’s. 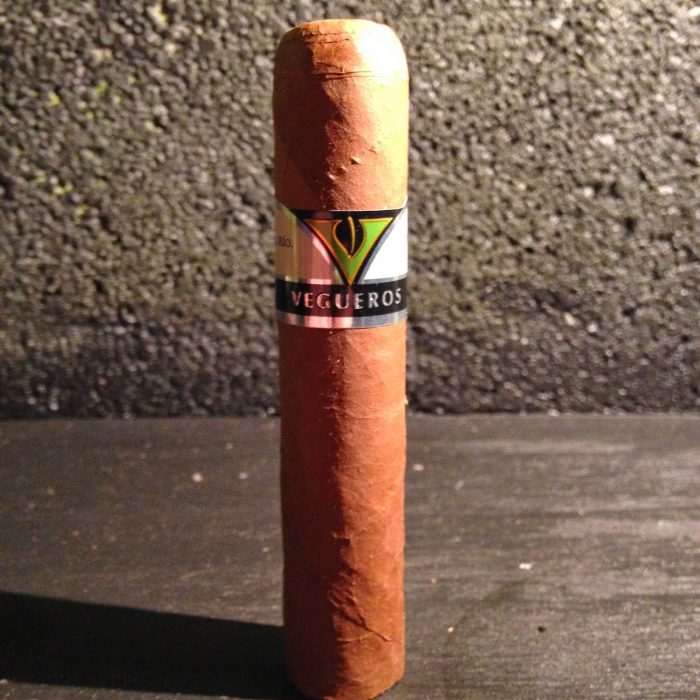