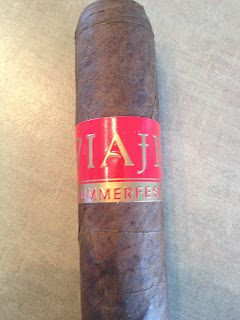 In 2010 Andre Farkas released the Viaje Summerfest. The cigar was intended to be single vitola release, a torpedo with a shaggy foot, but the factory accidentally made some robusto sized vitolas as well that featured a shaggy foot. In 2011 they continued with two releases of the Summerfest, but in 2012 they went back down to one. At the 2012 IPCPR Andre Farkas was discussing the Viaje brand with Leaf & Grape (Stace Berkland) and Cigar Coop (William Cooper), and the three of them began discussing the Summerfest 2010 Robusto. Coop and Stace commented on how much they loved the 2010 robusto, even though it was a cigar that was not intended to be produced, and Farkas listened. For the next year or so the three of them worked in creating a vitola for 2013 and came to an agreement with the current release. It is exciting to see two friends take part on some level in the creation of a cigar, and I am happy to see a manufacturer respect and listen to two great individuals.

For 2013 Andre released one vitola offering, and that was a robusto extra. The cigar measures 5.5” with a 54 ring gauge, and has a substantial shaggy foot. Made in Honduras at Raices Cubanas, the cigar is a Nicaraguan puro with a Corojo Rosado ’99 wrapper. The coloring on the cigar is slightly marbled brownish red clay, and is between Colorado and Colorado Maduro in coloring. The filler tobacco shows some solid weathered brown coloring and has an aroma of hay, Asian spices, manure and tobacco. The wrapper gives off some solid hay, tobacco and cedar notes as well, and it makes me think of summer time. The one thing that is off to me is the band. In no one way does it affect my rating, but the colors seem off with the cigar and I don’t like the gold on red. I typically do not get into that, but I am not fan of the coloring. (Now I wait till someone asks me what colors I would like to see.) 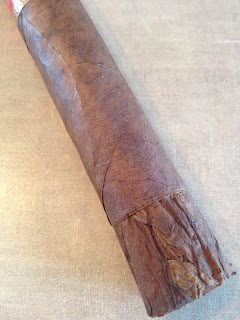 Upon lighting the cigar I am obviously getting flavors from the filler tobacco in the shaggy foot. There are some solid sweet tobacco notes to that, and I am getting some cedar and Asian spices as well. I like how much shaggy foot the cigar offers because I felt that it really gave me the opportunity to fully taste the filler tobacco. Once I get to the wrapper and binder tobacco on the cigar I begin to get some additional coffee and floral notes to the cigar. I love the shaggy foot and the ability to enjoy the filler tobacco, but the flavor profile of the cigar is really completed when the wrapper and binder tobacco get involved. The construction in the first is terrific and it burns evenly producing a nice charcoal ash that holds on to the end firmly. I would say the first third has a body and strength level between medium and medium full and very enjoyable. 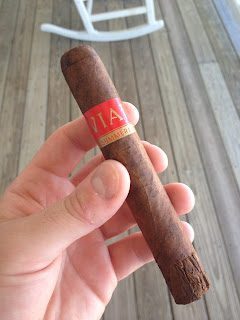 When I get into the second third of the cigar the flavors begin to really grow and it shows some nice pepper and coffee notes with the sweet tobacco. There are some seasoned wood notes present with the cigar as well, and it is really providing a nice spicy and woody finish. This cigar really has a flavor profile that is summer like. The strength and body in this third are fairly similar to the first third, and it is a solid medium full cigar that I could enjoy anytime. The construction on the cigar in this third is a little wavy compared with the first third, but not producing any problems in terms of the smoking experience. The ash is that nice charcoal coloring and holding on firmly and there is a nice bit of smoke being produced with each draw. This cigar is definitely a summer cigar, and everything about it, from flavors to body, is perfect for the weather I am experiencing right now.

The final third show some transitioning, like the second third did, and I am getting some solid cream notes pairing with the coffee from before. There are still some great seasoned wood and spicy notes to the cigar, and they are pairing well with the sweet tobacco and floral qualities. There is a lot going on with the cigar, and it has depth and complexity while showing transition from third to third. The body and strength are between medium and medium full when the cigar comes to a close, and it has remained a cigar that I could enjoy at really anytime from beginning to end. The construction in the final third is pretty similar to how it was in the second, and while it is not a perfect burn line, it is far from being difficult and presenting any problems. The ash holds on firmly in this third as well while producing that solid charcoal coloring. As I finish the cigar everything is going well, and the last draw is flavorful, smooth and cool. 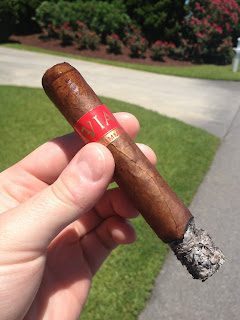 This is a classic example of a cigar that I enjoy but does not wow me. The one characteristic to the cigar that I really like is the shaggy foot. The length given to the shaggy filler tobacco is terrific, and I really got to enjoy the filler tobacco for a good period of time. The vitola offering is enjoyable as well, and it has a ring gauge that is large, but not over the top, and is balanced by a great length. It is a solid robusto extra or super robusto to me and it really shows great characteristics from the filler tobacco. I found that the flavors were solid from beginning to end, and the construction was consistent and solid from smoke to smoke. Viaje is a company that lives by its seasonal releases, and to me this is a solid summer cigar. The flavors and body of the cigar fit in perfectly with the season, and I think that is because it is very balanced while showing some natural summer like qualities. Is this my favorite release from Viaje? No, but it is still an enjoyable cigar that many would like. I have yet to find three manufacturers that have a portfolio in which I love everything, and that is good. Not every cigar produced is going to speak to your palate, and if you begin to love everything that a particular manufacturer makes then they are not changing things up with their cigars. What I do love about this cigar is that two friends of mine were involved in the creation. I think it is wonderful that Andre consulted them and asked their opinion on a vitola offering for this years release. I am giving this cigar a solid 89. I have two left in my humidor, but I will hold on to those in honor of Cigar Coop and Leaf & Grape. 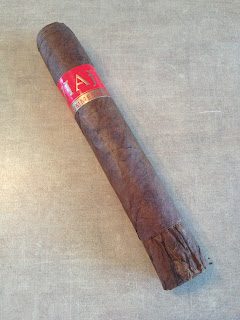