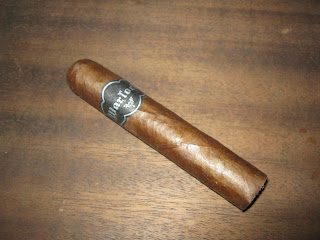 When one thinks of cigars by Altadis, the Warlock line is not your typical line. More often than not one will think of Montecristo or Romeo Y Julieta. There is nothing wrong with those lines, but the Warlock captures something a little more special. The great aspect of the Warlock line is that it has always captured those great qualities of a boutique brand while having the backing of a large cigar manufacturing company. When the cigar was initially released in 2010 it captured the eyes of smokers like myself, who is a boutique smoker, and it also caught the eyes of those who loved the lines Altadis had. Unfortunately, like most cigars after several months, I lost attention to newer products, but when the cigar recently got the Number 9 Ranking by Cigar Aficionado, I began to pay some more attention again. I am fortunate enough to be able to be in touch with Altadis, and when they offered me some samples to review, I was more than glad to try them out again and review them.

The Warlock line is made in Nicaragua by Omar Ortez, and is made in their Nicaraguan factory called Agros Tobacos. Omar Ortez has worked with Altadis for many years now, and besides having his own line Omar Ortez Originals, he has worked on other blends of theirs as well, and is the sole creator behind the Warlock line. The cigar is made with tobacco of theirs that has been selected because of its rich and bold flavors, and is made from some of the best countries as well. The wrapper is Ecuadorian Cubano seed, and underneath that  is a Nicaraguan binder. With a great binder and wrapper there lies a great filler blend composed of tobacco from the Dominican Republic and Nicaragua. I should note that all the tobacco from Nicaragua in this cigar is actually tobacco from the Condega region in Nicaragua. The region is known for producing very balanced and flavorful tobacco. It is not as flavorful and refined as tobacco from Jalapa,or as strong as that of tobacco in Esteli, but is a perfect balance between the two. The vitola I smoked was the robusto vitola, which was the smoke that recently received the very high ranking, and it measures 4 3/4″ with a 54 ring gauge. The cigar is beautiful in hand, and has that dark coloring and fonts associated with the world surrounding a “warlock.” It has a dark chocolate brown wrapper, Colorado Maduro, and it has some veins present here and there. It is a very firm cigar, and the cap is placed on perfectly. Feeling all the oils that are present in the wrapper I am getting wonderful aromas of barnyard, rich earth, leather and damp wood from the foot and wrapper of the cigar. As I cut the cigar the cold draw is great, and producing some great flavors with it. I am really looking forward to this smoke, and so I am lighting it up.

From the get go the cigar shows those rich earth flavors that I got from the pre-light aroma. It is a very pleasant smoke that is producing a huge amount of smoke. As I get further into the first third I begin to pick up a lot more flavors, and some really unique qualities to it. There is a nice bit of salted wood, rich earth and leather, along with this caramel mocha finish. It’s really an enjoyable smoke, and it reminds me of Cuban cigars that are very rich. Not that Cuban cigars aren’t rich, but it is reminiscent in some ways of a Bolivar, Partagas, or even a Ramon Allones. It is just a lovely cigar that has great qualities. I would say the cigar is smoking at a solid medium for me, and it is leaving a solid ash that is charcoal gray in coloring. The cigar is burning incredibly even and slow. I feel that the oils from the wrapper are cooling off the heat so it burns slowly, it is very nice.   As I get into the second third of the cigar, it is still showing those awesome flavors from the first third, and is staying at a solid medium in terms of strength. I am really digging the flavors that this cigar is giving off, and it is really a cigar that I find to be one of a kind. It captures two different flavor profiles while being one cigar. It’s like drinking a Shiraz and Chardonnay at once, and having it be great. Those flavors of salted wood, caramel and leather you typically find in one cigar, and then the rich earth, mocha, and barnyard flavors you find in another. A very enjoyable cigar. The burn line is still perfect in the second third, and I am holding on to the ash from the first third. The coloring is still that of charcoal gray, and the cigar is producing tons of rich smoke.

I am the final third of the cigar now, and this great experience is coming to a close. The cigar is still burning perfectly in this third, and leaving a beautiful ash and burn line, and the smoke is still very thick and aromatic. As I get close to the nub the cigar is still burning cool, and even when I get into the nub the cigar never got hot and was great all the way to the end. In terms of flavor the cigar stayed very same in the final third to what it was in the first two thirds, but it was so great I did not want it to change. Those unique flavors were very complex, and I am sure I have been something when trying to pick out the flavors. As I have been saying the combination of caramel, mocha, wood, salt, leather, rich earth, and barnyard have been phenomenal throughout, and I can see how this cigar kept on capturing the attention and palates of the Cigar Aficionado Tasting Panel.

These cigars were so entertaining to smoke. I felt that they really captured these qualities that you typically find in a rich Cuban cigar, and that made them so great for me. They were always flavorful from beginning to end, and they performed very well as cigars. They were not powerful or soft, solid medium in body, but the flavors were damn great. I really love that Altadis is attempting to make some boutique smokes no matter the size of the company, and try and captivate those cigar snobs out there who love boutique smokes. I think they are taking some right steps in reaching out to a lot of smokers, and this is a prime example of that. This was a great cigar in that sense, and is a great cigar in general. I give this cigar a 92, and really look forward to smoking more of these down the road. I have smoked them before, but this is the first time that I really sat down and analyzed them, and because of that I picked up those wonderful qualities it had to offer. This is one of the best brands that Altadis makes, and it is also one of their brands that is in actuality boutique. Quite simply,  a wonderful cigar by Omar Ortez and Altadis, and congratulation on the great ranking you all got in Cigar Aficionado Top 25 Cigars of 2011!

*Cigars gifted to me by Altadis, USA