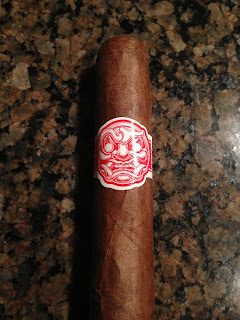 If there is a brand that has really caught my attention lately it has been Room 101. From their blends to their advertisement I am intrigued to smoke a Room 101 cigar when it is released. You won’t see me sporting any of the Room 101 jewelry, or even have tattoos, but the cigars themselves I will smoke. To be honest with you I don’t think the jewelry would jibe with Brooks Brothers. Since they released the Namakubi the company has been producing hits, and their most recent release caught my attention more than any I believe. The reason for that is the wrapper in which the cigar is finished with. I am a big fan of Criollo tobacco, and whether it is from Ecuador, Nicaragua or Honduras, I love the flavors it produces. I think Honduran Criollo is a little more rugged overall, very rustic, and it really offers a lot to a cigar. It is very dominating, but when blended correctly can do wonders.

The Serie HN begins with a Honduran Criollo ’98 wrapper. Room 101 says the wrapper can be very rich, spicy and dominating, so they then used a Brazilian Mata Fina binder to balance it out. The filler blend is composed of Honduran and Dominican Navarette, and we are seeing more Navarette tobacco being used in Camacho blends as well. Like all cigars from Room 101, the cigar is made in Honduras at Agroindustrias Laepe S.A., and this is the factory where Camacho and Room 101 smokes will be made at. For this review I chose the 213, and the cigar is a “corona” measuring 5.5″ with a 44 ring gauge. Pulling some inner Dion, I found out that 213 is an area code for downton Los Angeles, and the other vitola names are for area codes in Hawaii, Nashville, TN and Miami, FL. The Papi Chulo size is called Papi Chulo. There may be a meaning, there may not, I will have to ask Matt the next time I see him. The cigar has a solid Colorado wrapper with a great cap, and it some small veins throughout. It is a smooth wrapper with some bumps from what I assume is the binder, and it has an aroma of barnyard, damp earth, raisins and tobacco. 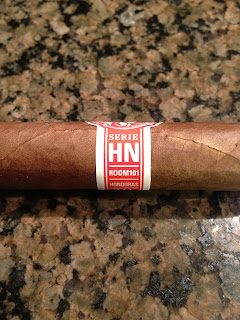 Lighting up the cigar I am greeted by some terrific flavors. I immediately get some lovely earthy and spicy notes that are accompanied by some creamy characteristics. There are some nutty and woody flavors present with that, and it has a soft lemon peel finish. I can definitely pick up that Room 101 flavor with the cigar, but also get that Honduran Criollo wrapper. The construction is terrific through the first third and it is producing a razor sharp burn line with a solid charcoal ash. The ash is fairly firm overall, but there is a slight bit of flakiness present as well. I would say that the cigar has a medium strength level and a body level that is medium as well. It is a very enjoyable first third, and I love this vitola offering for the smoke. 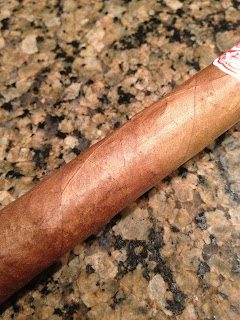 The second third continues to feed off of some of the core flavors from the first third, and I am getting some great spicy notes that have some major earthy qualities with that. There are some toasty and woody notes present as well, and it is also showing some soft peanut notes with that that are almost like a natural peanut butter. It has a lovely tobacco and creamy finish as well, and it is a very round cigar. The strength and the body of the cigar are still around the medium level, and I might say that the body is slightly stronger than that, maybe medium to medium full. The construction in the second third of the cigar is phenomenal, like the first third, and I am getting a razor sharp burn line that has a solid charcoal ash holding on firmly to the end. It is slightly flaky in parts, but holding on strong. 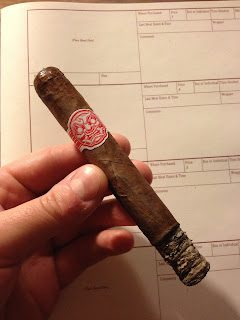 I am in the final third of the cigar now and I am finding the flavor profile to change slightly in the end. The cigar in general has kept that core flavor profile of being spicy and earthy, while balanced by some creamy notes as well. It has predominantly been a cigar that captures that rustic Honduran flavor profile that is balanced and smoothed out by Dominican and Brazilian tobacco. There are some solid toasty and nutty notes in this third as well, and the finish is flavorful and making you want another. The strength and body have remained fairly similar to the second third in the end, and we have a body that is around medium full and a strength level at medium. The construction in the final third is terrific, and I am getting a razor sharp burn line with a nice firm charcoal ash. The draw has been coll throughout the whole smoke, and it remains that way to the nub. 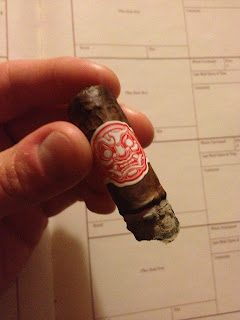 This is a terrific blend and I find it up there with the Namakubi and Daruma. I love the Honduran Criollo wrapper on this cigar, and the great thing about the smaller ring gauge offerings is that you can really taste the greatness of the wrapper. The whole blend itself though is great, and the sizes offered are terrific. Matt Booth is a manufacturer that captures then young and modern day smoker with his packaging and lifestyle, but he is a classical cigar manufacturer in the sense of the cigar vitolas he makes. The construction on this cigar is terrific from beginning to end, and it is such an easy and no worry cigar. The pricing is incredible as well, and though that does not play a factor in the rating, on a personal level that says a lot. I am interested to see what others have to say about this cigar, but it is a cigar that I love. I am giving this cigar a solid 91. 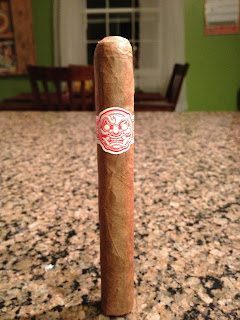