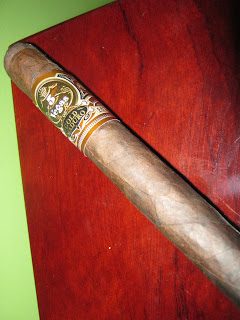 When one begins to smoke cigars at a higher level they begin to get in the habit of a having a “go to cigar”, which usually is not expensive but an everyday smoke that is just awesome for them. Great price, great flavor, great strength. Along with a go to cigar you have your go to morning, go to afternoon, and go to evening cigar. Now I am not saying that you don’t have a special cigar daily or a couple a week but I have found that there is my daily go to cigar’s and then I will have something special sometimes randomly. There was a time when my daily morning cigar was the 5 Vegas Gold Nugget. It was small, mild, and very flavorful but now there is the 5 Vegas Gold Maduro! Released in mid-late 2010 this cigar has been a favorite of mine after the first cigar. When you first see this cigar you see a Pennsylvania Broadleaf maduro wrapper and you might think, how is this a morning cigar, PA Broadleaf cigars are you usually pretty full in body? The answer is the fillers withing and the blending. This cigar is made in the Segovia Factory in Nicaragua, which is run by Nestor Plasencia. Nestor is like the king of Cuban-seed tobacco. He has farms all over Central America and is involved in so many of the cigar on the market today it is unbelievable. Under Nestor, this cigar was blended by Anibal Salinas who has worked with Camacho, Padron, and many other manufacturers for over 40 years. He has been involved in so many great cigars from the blending process, that is knowledge is uncanny. Underneath the PA Brodleaf wrapper you have the binder from Nicaragua, and fillers from Nicaragua and Honduras.  Nestor is known  to utilize the best tobacco from areas all over. Yes he makes puro’s but why not just make an amazing cigar with the best tobaccos around Central America? This maduro is truly wonderful because it exerts so many flavors and yet remains so smooth and mild in body throughout, it truly is blended incredibly. The cigar starts with some white pepper notes but dies down further in and you are greeted by  nice smooth and rich flavors. If you did not know that this cigar was mild in body before smoking upon lighting you might think this would be a full body. Once the pepper dies down the smoke takes on characters of wood, mild spice, dark chocolate, and toast. It was like eating Nutella on a piece of toasted whole wheat! It was amazing.

I have had many maduros in my time, more importantly many cigars, but I have never had a cigar like this, that is so rich and flavorful but still mild in body. The blending on this cigar is superb, it shows such quality and patience. Patience is appropriate for this, because it took them over 4 years to blend the cigar to the flavor and strength profile they were looking for. Any of you who enjoys mild cigar and actually prefer Connencticut Shade wrappers should try this smoke, it will open you up to a whole new world of cigars and you will see that just because it has a dark wrapper does not mean it is a strong cigar. This cigar was easily a 91 and a great smoke anytime of day. In fact, I am going to go enjoy another! Go buy a 5 pack of box now! Cigars International – 5 Vegas Gold Maduro