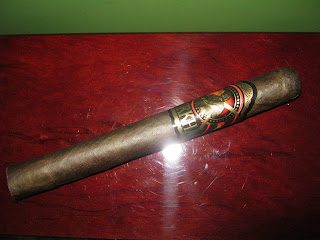 Most cigar smokers know of the Black Dragon line by Gurkha but the history behind it is still fairly unknown. In 2006 Gurkha launched an extremely limited cigar that was also extremely expensive. Black Dragon was once limited to only 500 cigars. The cigars came in five chests of 100 cigars each and the chests were made of hand-carved camel bone and solid brass. The chests were acquired from an Indian Palace when the magistrate was holding an auction and Gurkha found five matching chests. The cigar was a 7 1/2″  by 52 ring gauge double corona  and was composed of tobacco from  the state of Connecticut and the countries of Cameroon and the Dominican Republic. The tobacco in these cigars had been aged for over a decade and each chest sold for $115,000. I am not aware of who purchased the chests but it is safe to say that they have no issues with cash flow. I have attached an image of the original Gurkha Black Dragon Chest.

A year after its release Gurkha decided that it would only be fair if they released a similar blend in a much more affordable price range. The composition of the cigar is same with Dominican fillers, a Cameroon binder and a Connecticut Broadleaf Maduro wrapper. The tobaccos in this blend are aged as well for several years but not as extensive as its predecessor. The cigar comes in four sizes, three of them rather large, and one is covered in a gloss tube. I smoked the second largest of the four, the Imperial Presidente, which measures 7″ with a 56 ring gauge. The cigar has a nice dark wrapper and has wonderful aromas of sweet tobacco, wood, cherries, leather and a hint of mint.

As I light the cigar it begins with a lot of cream, earth and leather notes. It is very sweet and mild with hints of coffee and cocoa. The ash is very nice on the smoke and it is burning well so far but nothing to dramatic. With the second third of the cigar chocolate notes become more prominent and I begin to pick up some coconut shavings with still lots of cream. This cigar is big and it is not even the biggest size in the line up so it is definitely a time chewer. Entering the final third I begin to pick up some barnyard notes that pair with the chocolate and cream interestingly. I am having some burn problems and it doesn’t seem to matter what I do there are just constant issues. It finishes with this minty taste along the cocoa and is very cool. Overall it was pretty similar throughout and didn’t really get any technical issues till the final third.

If you were to ask me if I liked this cigar I wouldn’t say yes or no. I believe that there are some who love this smoke but I know there are people who can’t stand it. I remember the pre-release of this smoke and the campaign to get it out there. It was huge, I mean it was everywhere and the build up was far bigger than the delivery. I think it could have the potential to be really nice if there was a change in the filler blend but the way it is blended I am not a huge fan. I do like the short robusto version a little more but nothing to dramatic. There is a point in this cigar where it becomes a little to boring. I am going to give this cigar an 87 and probably smoke them on mornings where I have tons of time or give it to guests and friends who like really mild and big cigars. Try one on for size though, you might like it.  I would be interested in trying one of original 2006 Limited Edition smokes to see how they are though, my guess is that they aren’t worth the money.