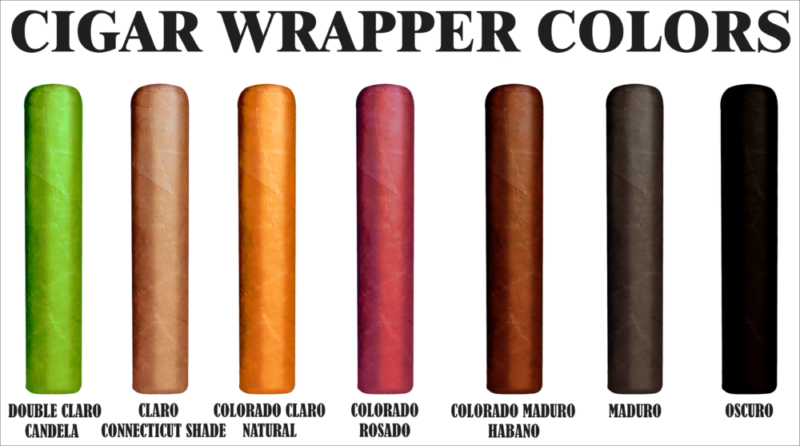 Cigar wrappers are the outermost layer of a cigar. They come in a variety of different colors and materials, each with its unique flavor profile. Knowing what you want before buying your cigars; otherwise, you might find something that doesn’t suit your tastes. This article will cover all the basics of cigar wrappers so you can make an informed decision when purchasing one for yourself or as a gift.

Here are some common questions about cigar wrappers:

To answer these questions, let’s start with a quick explanation of cigar wrappers.

The color of the cigar wrapper describes not only what it looks like but also some of its flavor profile aspects. Generally, the darker and thicker a wrapper is, the stronger it will taste and vice versa. Most cigar smokers tend to use some basic guidelines to describe these colors:

Most of these young leaves are popular in the American market, although some can be light blonde to a bright green. The leaves are generally flash-cured using a quick-drying process with charcoal fires, which were traditionally fermented. The name “Candela” comes from the use of candlelight for this process.

Green leaves are treated with a drying agent that binds the chlorophyll, giving them their distinctive green color. This is why green cigars are sometimes called Candela and blonde ones Double Claro.

Claro tobacco is grown under cheesecloth tents, which protects the leaves from direct sunlight. This keeps them in the shade and reduces their exposure to the sun. However, it also shields delicate leaves from changes in the weather. Claro wrappers have a distinct orange or golden color after air-drying.

The color isn’t limited to the North-Eastern United States, as the Connecticut Shade is the most famous example. The flavor is mild and flowery, similar to that of a cedar tree. This is also observed in countries such as Ecuador, which produce a light and pleasant cedar taste.

Colorado Claro is a medium brown strain cultivated in direct sunlight and allowed to mature before harvest. The result is a so-called natural wrapper that isn’t too dark or light. It’s also known as English Market Selection. On the other hand, this phrase usually indicates a specific stock approved by historical importers such as Hunters & Frankau.

Colorado is a well-liked variety because of its rich flavor and aromatic scents. Because of their greater maturity, Colorado leaves mature considerably longer than their lighter counterparts to build a robust profile.

Colorado is a popular variety because of its fragrant aromas and robust taste. Colorado leaves are often grown in the shade, which allows them to mature considerably longer than their lighter counterparts to develop a full flavor.

It was formerly known as the Spanish favorite as a compromise between the Colorado and Maduro (hence the name). However, it has since lost this connection. Some have said it has a more excellent aroma profile because it is somewhat less cured than a Maduro.

The Maduro (or “mature”) cigar wrapper is one of the most well-known, owing to its fan base. It’s usually produced from some of the plant’s tallest leaves that have been exposed to sunlight. It can undertake years for fermentation.

Maduro leaves are thick and coarse because they must endure the intense heat of the pressure chamber aging procedure. The result is an oily yet robust wrapper with a distinctively sweet taste and a high nicotine content.

The Oscuro is produced from the most sun-exposed leaves, just like the Maduro. They’re kept on the plant as long as possible before being cut; however, they undergo a more lengthy and intensive fermentation process than a Maduro that can last several years.

As a result, the cigar develops a dark, almost black wrapper with a rough texture and intense flavor. They are difficult to come by because they are infrequent to produce.

What is the difference between natural and Maduro?

Maduro is a wrapper usually grown in the shade and fermented for more extended periods. It can take years before fermenting and drying enough to be used for wrapper purposes.

Natural cigars, on the other hand, are easier to make but vary in quality. They usually contain tobacco from many different lots and seed varietals. On top of this, it can be challenging to get all leaves ready at once. That said, natural wrappers tend to be darker because they’re allowed to cure over a long period.

Do Maduro wrappers have more nicotine? What about Oscuros?

Because Maduro cigars are rolled with more mature leaves than their lighter counterparts, they usually contain more nicotine. Oscuros, on the other hand, are essentially Maduro leaves that were left to mature for much more extended periods. These wrappers tend to be much darker and contain much higher nicotine levels than typical Maduro leaves do.

It’s difficult to say what type tastes better because they each have their unique flavor profile. However, many agree that Maduro’s usually create a bolder flavor with spicy notes while naturals lean toward an earthier one with hints of wood and coffee.

What does Connecticut Broadleaf mean? And what’s its taste profile like?

These wrappers are usually grown in Connecticut and tend to be medium brown with a delicate texture.

What is it: It’s a type of wrapper grown in the USA and has a delicate taste and texture.

What should you expect: Light bodied, dry flavors like woodiness, earthiness, and coffee, with hints of cocoa. Sometimes there may be some pepper notes.

How well does this sound for cigars?  It sounds nice because it will add dry woody notes to whatever cigar you add it to! It’ll add exciting flavors such as coffee or even subtle hints of chocolate. The dryness can also help balance any sweetness from other tobaccos, so your smoke doesn’t get too sweet or cloying.

How do I pick which wrapper color suits me best?

The best way is to try the different wrapper types before you settle on one. If possible, visit a cigar shop where you’ll have the opportunity to try out a few samples.

If this isn’t an option, consider your tastes and preferences and what kind of an occasion is most appropriate for smoking cigars. For instance, if you only smoke outside, you’ll want to go with a lighter wrapper. Darker tones are usually more appropriate if you like smoking sophisticated cigars at home or in your office.

Finally, if you can’t try cigars out first-hand, research online for reviews and recommendations from other cigar enthusiasts.

Cigars come in many different wrapper types and colors, but the most common are natural and Maduro. A natural cigar is made with tobacco that has been cured over a long period–which can make them seem lighter or more earthy depending on what you like to smoke.

Maduros, on the other hand, undergo an extra stage of fermentation which makes them darker than their counterparts; this also means they’re usually stronger in nicotine content (although it’s still important not to get carried away).

Lastly, if you don’t want to commit before trying out all your options first-hand, we recommend consulting reviews from experts online who’ve tried these cigars themselves. This will give you a better idea of how each type tastes so you can pick your favorite.