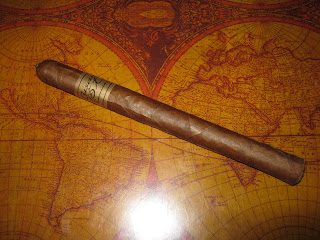 2010 was the 15th Anniversary for Cusano Cigars and it was in that year that they released this limited cigar. Available in only one size, a lancero, this cigar is beautiful to look at. Although the original founders, brothers Mike and Joe Chiusano, are no longer with the company the cigars are in good hands being made in the same factory, and by the same people as Davidoff Cigars. When it was released Joe was still with the company but it had been some time since Mike had left. I like the lancero size and I think it can really be great for certain cigars, but it really has to be blended right. I feel that there are a lot of times where they make a lancero vitola in the line but the wrapper is not that unique for it and the cigar then just becomes dull. With the lancero size you really get the flavors of the wrapper, and I look carefully at cigar wrappers. The cigar measures 7″ with a 40 ring gauge and is beautiful in hand. It has a nice pigtail cap, which you see on lancero’s quite a bit, and has a beautiful dark wrapper that is incredibly oily. The wrapper is a hybrid Habano-seed grown in Ecuador with a Dominican binder, and has filler tobacco from the Dominican Republic and ligero leaves from Nicaragua. Holding the cigar up to my nose it has a wonderful aroma of nuts, spices and barnyard to it. The cigar begins very smooth and soft giving off notes of walnuts and cedar. There is a hint of spice with the cigar but it is very subtle and the cigar remains fairly medium in body. Further into the first third and into the second third the cigar begins to show more flavors and I begin to pick up notes of stone fruit and espresso beans as well. In the second third of the cigar I am picking up lots of the flavors from the first third but there is a mild harshness to it which I am not to comfortable with. It is a very interesting cigar with the spice level, it is present but not present as well, very interesting. The cigar is still medium in body but I am beginning to pick up some more harshness to it, it almost seems as if the cigar is still young and needs time to rest. I am in the final third now and the cigar really has picked up in strength and harshness. There are a lot dark flavors present, lots of oak, tobacco, spices and earth. It has definitely lost some balance from the first two thirds and the closer I get to the end the hotter and harsher it gets. Unfortunately I had to put the cigar down long before the nub because of this and it is ruining my impressions on the cigar. I am not sure with this cigar, and I don’t know if it is too young and unfair to rate it, but right now I would give this cigar an 87. The cigar had some nice flavor early on but when I got past the midway point the cigar really went downhill. It burned evenly throughout and looked great but in the most important aspects it lacked. If I were to give this cigar another chance I would want to smoke it a couple years from now and see hot it is but right now I am not feeling the need to try it again. If you are a fan of Cusano Cigars I would choose another one of their lines and if you were a lancero fan I would look elsewhere. Sorry to say it, but sometimes you get something which is just not that great.