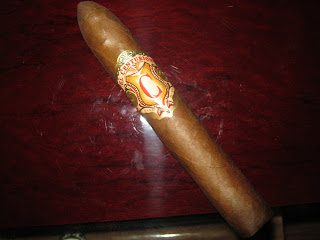 In 2007 Don Pepin Garcia announced the release of a one time limited edition smoke, El Centurion. It was a cigar that was made at Don Pepin’s old factory in Nicaragua, Tabacalera Cubana, before My Father Cigars was even thought about. The cigar would come in three sizes and would be sold in boxes of 20. They limited production to only 850 boxes in each size and the cigar retailed in the double digits. The tobacco for this cigar was carefully selected and would be a Nicaraguan puro. The cigar is covered in a milk chocolate Nicaraguan Habano wrapper that is practically vein free. Underneath the wrapper is a Nicaraguan binder and fillers that are comprised of Corojo ’99 and Criollo ’98. The cigar is beautiful in hand and with four years of aging under its belt I know it will be a treat. The wrapper has wonderful aromas of dark spices, leather and a flavor reminiscent of s’mores. The cigar cut beautifully and had a wonderful draw to it. Once lit the cigar hits you with a blast of paprika and wood, but gets softer the further into the first inch it gets. Don Pepin is noted for making his cigars start off with a bang and it makes me think of symphonies that begin with a fortissimo dynamic and quickly decrescendos into pianissimo. From there on the cigar shows its true colors and I pick up lots of roasted coffee, nuts, cocoa, cedar and white pepper. The cigar burns beautiful throughout and remains wonderfully balanced. The cigar is medium/medium-full in body but I remember it was stronger sometime back. The second third is very similar to the first but I picked up a lot more creaminess to it while remaining very complex. This is really a great cigar and it is a shame that it was a limited release. I have maybe a couple more sticks in one of my humidors and if I were smart I would have bought a box a long time ago. I’m in the final third now and the cigar is still going strong, it is has increased in strength since the middle and is now shoring lots more white pepper and cedar with a sweet finish of cafe mocha. I am very fond of this cigar and give it a high rating of 96. The cigar has aged wonderfully and shows incredibly flavors and body. I would love for everyone to try this smoke but if you don’t have them in your humidor good luck finding them. I know that some retailers hold on to certain cigars or they get them and people never notice them but I am not sure where. When I was in Raleigh, NC a year ago at a Tinder Box the shop proprietor had a dozen of them left and I picked up a handful and I am not sure why I didn’t get the rest of the box. Overall this is another great cigar that was only with the industry for a short time.