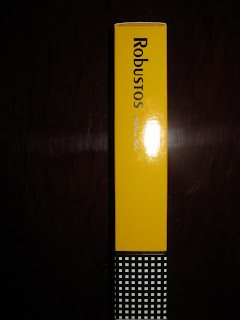 The Cuban Cohiba Robusto is the most sought after cigar in the world. The Cohiba line was established in 1968 as a limited production private brand supplied exclusively to Fidel Castro and high-level officials in the Communist Party of Cuba and Cuban government. Often given as diplomatic gifts, the Cohiba brand gradually developed a “cult” status. It was first released commercially for sale to the public in 1982. The robusto was not in the original three viola’s launched within the line, but was the in second phase, and has become the best well-known. If you have ever been abroad or even somehow in the Keys and bought a Cohiba, it is probably the case that you bought a fake one. I have always been careful when buying Cohiba cigars, and will always be careful. Made in the traditional format the cigar measures 4 7/8” and has a ring gauge of 50. The cigar has a beautiful wrapper, with no stretch marks or any flaws. The triple cap is perfect on it and the draw is impeccable. This cigar would be in my Top 5, but I rarely smoke it, so I don’t think I should put it there. I have bought these in boxes and 3 Pack, and have rarely had a problem with them. 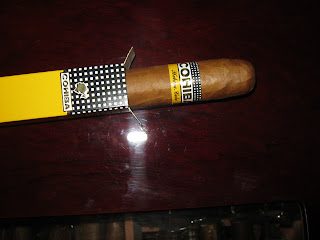 This cigar starts off as a flavor bomb, and never tones down. From the first puff, you get lots of spice, nuts, lemongrass, and some stone fruit. This cigar just captures so many flavors and remains very complex. With every puff I get spice and nuts on the front, and finishes with stone fruits and lemongrass, truly amazing. This cigar hits the ground running.

I have just finished the first third of this cigar and it is amazing, I mean a great cigar. This is just an amazing smoke, and deserving of its reputation. I am still getting lots of stone fruits, predominantly apricot and nectarine, but I am also getting caramel, some toasty notes, lemon, and espresso. This is a perfect cigar for the summer time, well it’s perfect anytime, but I just imagine smoking these often in the summer time in the sun with a mojito.

I am on the second third of this smoke and I am in tears.  This is such a great cigar; it has got body, complexity, and just downright entertainment! I am in love with this cigar, and not looking forward to this smoke ending. I need to stress once again, the great flavors I am getting right now.

I just finished the second third of this cigar and it is still strong. I am still getting loads of stone fruit, lemongrass, nuts, and coffee. This is just a model for cigars. If I were to begin blending my own brand, I would use this cigar as a trademark, it just has so much depth, and I find that so crucial in a cigar. I look forward to every Cohiba Robusto I ever smoke.

Just finished this cigar, and what a trip it has taken me on. The stone fruit isn’t as prevalent as it was for the first two thirds of this cigar, but has become very dark. The flavors are of dark roasted nuts and dark chocolate covered espresso beans. I am in awe of the flavors I have gotten out of this smoke.

This cigar got a 96 in my book and that might be even low. I know a lot of people will state that these smokes are overrated, but I would disagree. I think Habanos S.A. puts a lot of time and money into this line, and there is a reason for it. Cohiba Robusto is a flagship of Habanos S.A., and I believe it should be a flagship for all cigars. If you want a truly unique smoke that will take you on a journey, this is the one for you. 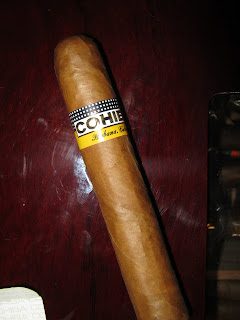