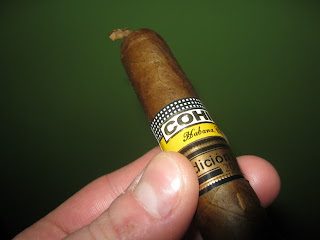 Before I even begin I need to apologize because I forgot to take a photo of the whole cigar before I smoked it. I know, I fucked up, but I did take some other crappy photos of the cigar, and I did spend a lot of time trying to find a picture of the cigar that looked like what I smoked. I did attach it halfway through the blog though. Mine had a slight ding in the wrapper, and I messed up the pigtail when I played with it, but the cigar smoked great.

Released during the 2011 Habanos Festival, the Cohiba 1966 Edición Limitada 2011 was probably the most popular cigar to come out of the festival after the Montecristo Gran Reserva. The cigar was one of the three Limited Edition releases for the 2011 year, and like most Limited Editions the cigar was finished with a darker wrapper than one usually sees on Cuban cigars. The cigar is massive for a Cohiba, more importantly a Cuban, and it fits perfectly into the cigars being made for the United States market. So far the cigars have received much praise, and have been noted for wonderful flavors and being very strong. If you were not aware of when the Cohiba brand was first produced, it was in 1966, and that is why the number made it into the name. Well, it has been a year since its initial release, and I am here today to smoke it.