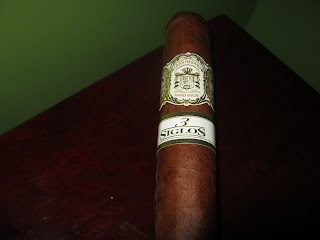 I love this cigar, or should I say loved, since it is no longer in production. Guillermo and George Rico, father and son, have a very small production in Honduras, but make great smokes. I have around four of these sticks left in my humidor, and they are going to remain there for sometime. Looking at this cigar, it is just spell bounding. You can see the oils shine on this beautiful reddish brown habano leaf that was shade grown in Nicaragua. I love cigars that have a wrapper that has red in the color, it is a sign of a great wrapper and great flavors. They get the name for this line, 3 Siglos, from the three country filler tobacco, that is all ligero. They of course use Nicaraguan tobacco in the filler, but also use Colombian and Costa Rican. There aren’t a lot of manufacturers who use Colombian tobacco, but Guillermo and George Rico do, and often. The cigar starts off with a lot of wood, cream, coffee, and walnut notes. The notes stay with the cigar throughout but it is after the first third where it begins to get very complicated. Throughout the rest of the smoke you begin to pick up pepper and spice flavors that come and go teasing your pallet and never knowing if the cigar is medium or full. This cigar truly is wonderful, and I believe is forgotten by many. Now I know you can not get this cigar again, but Cigars International has such a positive relationship with Gran Habano Cigars, that they were able to get almost the exact blend made for them, but called 3 SLS. I give this cigar a 90, and would recommend it as an everyday smoke.

Give it a try, Gran Habano 3 Siglos