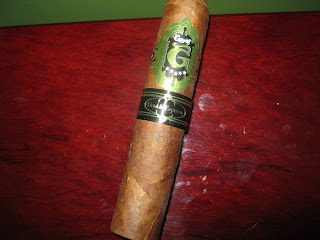 Available to only six dealers worldwide, this is the most limited of the limited Graycliff collection. The Double Espresso is a short but powerhouse of a cigar. Measuring 4 1/2″ with a 54 ring gauge the flavor and power in this cigar tickles your palate during and long after the smoke. Covered in a beautiful milk chocolate Jaltepec Costa Rican maduro wrapper and packed with unique ligero tobacco from Central and South America this cigar hits you from the start. Right away you are greeted with lots of black pepper just to announce its presence, but it slowly fades and becomes a background flavor. Once the cigar gets going the chocolate, spice, and coffee flavors become more prevalent. The body on this smoke is heavy throughout, but due to the excellent blending skills it never becomes too much. The cigar remains flavorful and and powerful throughout and you’ll find yourself smoking it all the way to the nub. The cigar was rolled perfectly with a great cap, and the ash remained strong and beautiful on the smoke throughout. One of my favorite aspects of this cigar was the draw. It was fairly tight, but because of that you could really control the flavors you got out of it and control the smoke I never had a burn issue throughout, and never had to relight. The only downsize to this cigar I would say is the pricing. Like most Graycliff cigars, they aren’t cheap, but if you can get these when they have a sale on them or a deal, you should take it! I give this cigar a 93, and I hope you all have a chance to smoke this, even if it is just once.