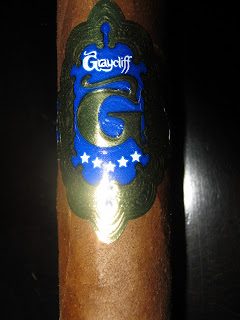 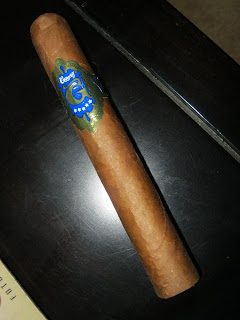 So I just received my Cigar.com Cigar of the Month Club set for March, and it was Graycliff Cigars. Among the 5 cigars I got, one was the Profesionale PG. I am not a huge fan of this cigar, everyone I have had has not been my type of smoke, but this one performed quite well. The cigar itself is covered in an Ecuadorian Sumatra wrapper with a filler blend from Brazil, Dominican Republic, and Nicaragua. I think the biggest highlight of this cigar is the wrapper. It is a beautiful light brown, no veins, and very oily. The wrapper was placed beautifully on and the triple cap was gorgeous. When I cut the head and took a draw it was very tight, so I cut a little more off…a little better. Once lit the draw on this cigar remained very tight, and because of that it took me sometime to smoke. I think you need to take your time when smoke anyways, but this was in particular took me sometime.

The cigar had a nice spicy cedar aroma, but the burn throughout remained uneven, and it needed several touch ups. The flavor remained constant and unchanging, not boring, but not exciting. Flavor profile was simple giving off some nice earthy, spice, and cedar characteristics, but besides that nothing else. I give this cigar a 90, it was very pleasant and enjoyable, but not for me. I am not the all knowing though, try one yourself.