Since it is the summertime, I figured it would be perfect to recap Episode Cinco, which focused on beetles and freeing cigars to prevent the larvae from hatching. Now I am not a scientist, and you can google yourself to death all sorts of pertinent information on the web on the subject if you like. The following is my take, my experience with the problem, and how to prevent beetles by freezing. Lasioderma serricorne as the tobacco beetle is know are present in larvae form in every cigar we smoke, to a degree. The potential for larvae to exist in every cigar is there. So for us collectors, we have to treat every cigar as a potential problem when it comes to beetles. General rule of thumb is at 72 degrees and 72rh, they may begin to hatch, specifically when temperature rises above 70 degrees. Some folks claim that leaving your rh low will prevent them from hatching even if the temperature is high; however, as someone whom regularly has humidors under well under 65, I got hit twice last year, on several sticks. None of the culprits were in my wineador, all were in my humidors, and ranged from Dominican to Nicaraguan sticks, older to newer. Both times I got hit, were also lower temperature times of the year, which made it all the more odd. Habanos are known for being troublesome with beetles, which is why I use a wineador, but I do plan on moving to a cabinet for aging in the future. So here is what to look for and how to proceed.

Dust piles: beetles eat their way out of the cigar, so if you see little dust piles, that is an immediate sign of beetles. You may not see beetle holes where they dug out of the cigar, as they may still be inside it, or may dug the holes under the band or wrapping as I have witnessed. When you find a cigar with a dust pile, hold it up vertically, tap on the cap, and if dust falls out the bottom, you have a beetle. 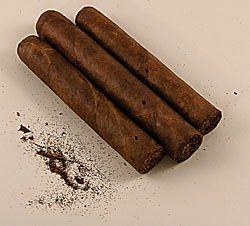 Beetle holes: Do not second guess if you see a hole in a cigar. Inspect every cigar in your humidor. Tap every cigar on the cap. Look for the dust piles, and pull them out of cello if you have to.

Freezing: You need a freezer with temperature that can get down to zero degrees at least. Mine hits negative six, and the lower you can get it the better. The general consensus is the higher the freeing temperature, the longer you need to freeze. For example, if your freezer is only getting down to 0-10 degrees, you might want to freeze for 7-8 days just to be safe. Most folks say 3-4 days is fine, and I tend to agree with that statement, when dealing with below zero temperatures. Most manufacturers claim to freeze, both Non-Cuban and Cuban, but we still seem to see them pop up every once in a while so do not take chances.