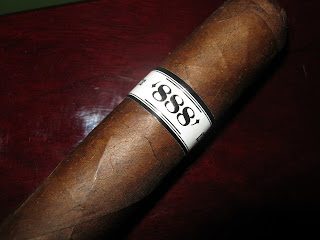 The Illusione Cigars are slowly finding their way into my humidor, and also becoming a favorite smoke of mine. Made at the Raices Cubanas Factory in Honduras for Don Giolito of Illusione Cigars, all of his cigars are Nicaraguan puros. He specifically uses Corojo ’99 and Criollo ’98 seed tobacco from the Esteli and Jalapa growing areas of Nicaragua. When creating the Illusione cigar brand, Don Giolito wanted to create great Nicaraguan cigars that were similar to cigars prior to the Sandinistas Revolution in 1979. Whether or not he has achieved that, since I have never smoked a Nicraguan cigar from the 70’s, I do not know; but he has made great cigars. When naming the vitolas within the Illusione line, he used his religious beliefs as a reference. The 888 got it’s name from the Hebrew numerology of Jesus, IhsouV, called Gematria. In gematria each letter is assigned the corresponding number. I find it very interesting, and when looking up the names of the vitola and how gematria all works I got distracted for some time.  Either way, the name of the vitola’s are creative and the brand itself is wonderful. The cigar measures 6 3/4″ with a 48 ring gauge and because of the length, I find it hard to call it a Corona Gorda or a Churchill. No matter what the proper vitola name is I love the size, and look forward to it. The cigar itself is beautiful, a Colorado Cafe color wrapper, and the triple cap on it is great. I have found this cigar to be medium in body and I could smoke it anytime of the day, though others might prefer it as an evening smoke. The prelight aroma is of chocolate and barnyard. The first third of this cigar started off very nice, with lots of earth, coffee, and some chocolate notes. I tend to really like those flavors in a cigar, I think they play off of each other very well, and lead to great smokes. From the end of the first third, I begin to get a lot more spice and the cigar became fuller in body, but it remained very earthy and chocolaty still. One of the best things about this smoke is the draw, some cigar draws are very loose, and it is overwhelming. I like cigars that are a little bit tighter because with that, you can control where the smoke goes and pick up more flavors. These smokes I tend to burn my fingers on, because I get them right down to the nub, if only there were a couple more inches!

Overall the cigar is great, along with the others in the line, and I strongly recommend it to all out there. I would give this cigar a 91, and look forward to picking up a box in the future, but there is not enough room in my humidors anyways. Give it a try, I know you can get these cigars at Empire Cigars or W. Curtis Draper. Enjoy.