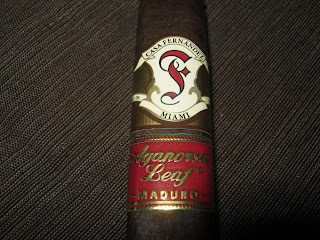 Casa Fernandez is one of my favorite manufacturers in the industry. While they make incredible cigars for the market, what they are most known for is one of their factories in Honduras, Raices Cubanas. The company employs only the most skilled of rollers and bunchers, and with that have an amazing team of workers in fermentation and blending. Probably their most notable employee is Arsenio Ramos, who works on the blends for their lines and outside companies, has been working with tobacco and cigars for multiple decades. While Raices Cubanas is a part of Casa Fernandez/Tabacalera Tropical, Tabacalera Tropical is a part of AGANORSA, which is the agriculture head of everything. Named after the agriculture company, the Aganorsa line pays tribute to the fields in which the tobacco is grown. The line was originally only available in a Habano wrapper, but this year they released the cigar with a Maduro wrapper and out of a new factory.

The cigar is made in Miami at their newest factory, and is made by some of the highest grade rollers. The filler is all Nicaraguan, top grade Aganorsa tobacco, and the binder is of the same quality Aganorsa Nicaraguan tobacco. The wrapper on the cigar is San Andrés seed and while I have heard it is from Mexico, reliable sources have also told me it is the same seed grown in Nicaragua. For this review I chose the Maduro 58, and the cigar measures 6″ with a 58 ring gauge. The cigar is box-pressed, and gorgeous at that. It is fairly firm in hand, and shows very few veins. The wrapper is smooth to touch, and slightly gritty in someways. It is truly a solid Maduro, and has a lovely coloring of dark chocolate bar. There is a great aroma at the foot of spices, cocoa, rich earth and coffee.

After lighting the cigar up I immediately pick up those Maduro flavors, and the cigar is lighter than I thought it would be. There are some lovely flavors of cocoa, rich earth, aged tobacco and coffee, and I am even getting some soft sweet spices and toasty notes on the finish. It’s a perfect morning smoke, and would go great with a cup of Cubita. The strength of the cigar is at a solid medium level, maybe even a little less, and it incredibly smooth. The cigar is burning fairly well, off and on it is gets a little wavy, but the ash is this near white coloring with some flowering present. As I said earlier, this cigar is starting off by showing some great morning smoke qualities. I am in the second third of the cigar now and it is still so pleasant. Those soft flavors of cocoa, coffee, aged tobacco and earth are really dominant, and I am even getting some nutty characteristics with the sweet spices. It is really smooth and flavorful, and at no point really strong. It is still showcasing that great medium body level in terms of strength, and it shows that this Maduro wrapper is really showing the smooth rich flavors and not the strength. The burn line is still a little wavy in this third, but it still has that beautiful coloring ash. The ash is a little flowery, but nothing that is a major problem. This is definitely going to be in my morning rotation.

When I get into the final third I am in a totally relaxed state, and I know this is going to be my morning smoke on Sunday. The flavors are so smooth and pleasant in this third that I really don’t want this cigar to end. There are those core flavors of cocoa, rich earth and wood, and I am even getting those coffee and aged tobacco notes. I am not getting any spice notes in this third, but there are some toasty notes still present. The finish is very smooth and very soft as well, it finishes in a way that prepares you for another cigar. The cigar is burning perfectly in this third, razor sharp, and the ash has really corrected itself in remaining very firm. It is still that lovely light gray, near white color, and on the last draw it flavorful and very cool.

This is my new morning smoke, hands down. If you are looking for a flavorful Maduro that is not going to be overpowering, but very pleasant, then you need not look any further. It is very different from the original Aganorsa stick, which I love, but just as enjoyable. This cigar really reminded me of some Padron Maduros on the market, probably between the Padron 4000 and the Padron 1964 Anniversary Imperial. These are cigars that are great to smoke now, and you will find yourself smoking through a box of them rather quickly. The only issue I had throughout was that the burn was sometimes going back in forth between good and not good, but other than that, it was a very tasty smoke. I am giving this cigar a 91, and look forward to smoking more of them down the road.