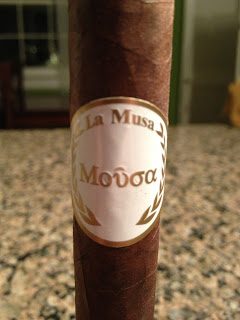 I do not understand why cigar smokers pick up large ring gauge cigars. I believe that they think they are getting more flavors with more tobacco and a bigger size, but no matter how much I argue with them about it they still do not listen. I myself am not one to pick up something with a ring gauge larger than a 52,  even though it happens from time to time, and that is because I believe with a smaller ring gauge you get so much more in terms of flavors. With that processed, you can imagine how excited I was when I read that Emilio Cigars La Musa Mousa line, formerly Grimalkin, was going to have an additional size, a corona gorda. I think the true corona gorda size is one of the best sizes on the market, and that is because it offers the perfect balance, my opinion, between the wrapper and filler tobacco. Now that I have gotten that over with, let us look at the new La Musa Mousa Corona.

The cigar is beautiful to look at, and the wrapper coloring is gorgeous. I am picking up some nice oils on the wrapper, and it has a solid Colorado Rosado coloring. You can see that blend of red and brown perfectly, and there are some veins present throughout. It has a gorgeous triple cap and it is firm to touch. The aroma to the cigar is delightful, and I am getting some rich earth and cocoa notes, with bits of cinnamon and Asian spices. The factory in which this cigar is not disclosed, but it is located in Esteli, Nicaragua. The smoke is the exact same blend as the original Grimalkin, and it is a Nicaraguan puro with proprietary tobacco. This smoke is called a Corona, but is more of a corona gorda with the measurements of 5.5″ with a 46 ring gauge.

Lighting up the cigar I immediately begin to pick up those cinnamon and Asian spice notes. There is a bit of raisin bread with that, and it is like a cinnamon roll almost. I am getting some red pepper, cocoa and cedar notes accompanying the core flavor profile, and it is an absolute treat. In terms of construction the cigar is top notch, and it is producing a razor sharp burn line that has a lovely charcoal colored ash. The ash is slightly flaky, but holding on firm, and I am getting a great draw with each puff. There is a nice bit of smoke being produced, and I would say the strength level of the cigar is between medium and medium full in body. It is a terrific start to the first third, and I can not wait for the second third. When I get into the second third I am still picking up those raisin bread notes, and the cinnamon and spice notes have toned down some. It is showing some nice cafe mocha flavors as well, and it has the slightest bit of sugar and honey to it. The cedar notes are present on the finish, and there are some distinct leathery notes with that. The construction of the cigar is still spectacular in this third, and it is performing as consistent as it was in the first third. There is a perfect burn line to the cigar, and with that a firm ash that is still holding on from when I lit the cigar. It has a nice charcoal coloring, and the draw is still cool, perfect and flavorful. You really can not ask for more in a cigar that has tons of flavors and a great medium to medium full strength level.

In the final third I am beginning to get some nice solid tobacco flavors, and it has some cedar, leather and coffee flavors. It is not as sweet and rich as it was in the first two thirds, and it is finishing dryer by showing some graham cracker notes. I would not say it is loosing its flavors, but merely making a transition into something different. I will say the strength increased slightly in this third. I have taken off the band now, slid it down to the nub, and it is making me remember the original Grimalkin band. I can say that this new band and name is an improvement, but the cigar was always great. The burn line is still razor sharp, with a lovely charcoal ash holding on firmly, and the draw is still cool to the nub. It is a flavor bomb to the end, and with that a solid medium medium/full smoke.

It is safe to say that this is my favorite vitola in the La Musa line. I kind of guessed that I was going to love it before I even lit it up, because of the size, but you never know. I thought the size really concentrated the great flavors that the line has to offer and as all of the cigars I have smoked with the La Musa or Grimalkin name, it performed wonderfully. It is a cigar that I would smoke anytime of day, and is a preferred smoke of mine. The flavors to this cigar were out of this world and that is what I look for in a cigar. Gary is a tobacco genius in my opinion, and I believe I have heard someone refer to him as the mad scientist of cigar blending before and could not agree more. I give this cigar a solid 94 and will be smoking more down the road. It is great to look at these cigars next to a Grimalkin, because they are the same and yet so different, and I can not wait till the lancero is released.