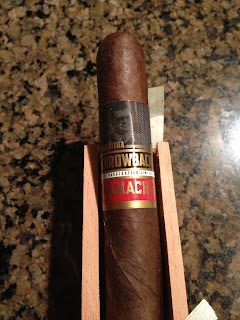 It only seems fitting that I review this cigar after the Chicago Blackhawks won the Stanley Cup Monday night. While this man was not a Blackhawk he was a coach and player of another great Chicago team, Da Bears. Da Bears have not been doing as well as they once were, but they were still a great team for many years. I still laugh uncontrollably when the Super Fans were praying over their meal and thanked Ditka and God for all that they provided. Yes, they thanked Ditka before God. While he has been a leader in the football world, some may not have known that he is a big cigar smoking guy. He started smoking cigars as a professional football player and eventually launched his own line in the late 1990’s. The cigars obviously were not hits on the market, but just last year he teamed up with the Honduran powerhouse, Camacho, to begin making cigars that would bear his name.

The partnership between Camacho and Mike Ditka began with the Mike Ditka’s Kickoff Series. The brand consisted of three lines that were all different and unique blends called The Player, The Coach and The Hall of Famer. I have not smoked the original three releases, but several months ago I read about a fourth installment in the line that would be called Mike Ditka Throwback. The cigar would be a limited edition cigar that would come in boxes of ten and be individually coffined. There would be 5,000 boxes made bringing total production to 50,000 cigars. Like its predecessors, the cigar would be made in Honduras at Tabacos Rancho Jamastran, and this is where all Room 101 and Camacho cigars are made. The cigar would be offered in one vitola offering, and that would be a Toro measuring 6″ with a 50 ring gauge. 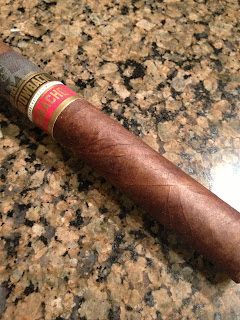 The blend would be a unique blend for a cigar coming out of this factory, and we saw something along these lines with the Room 101 Big Delicious. I think the factory is no longer producing cigars predominantly of Honduran tobacco, and we will be seeing some unique blends come out of there. The wrapper on the cigar is 5th priming Corojo Maduro from Honduras, and it has a binder that is from Brazil. The filler is a combination of Dominican, Honduran and Nicaraguan tobacco, and it is a diverse blend. The wrapper has a nice coloring to it, and it shows some solid maduro qualities while touching on some Colorado aspects in the right light. It is fairly oily to touch but firm and silky. There were some minor veins throughout but overall it is a nice looking cigar. There is an aroma of cedar, tobacco, coffee beans and citrus peel, and it is showing some qualities I was expecting. 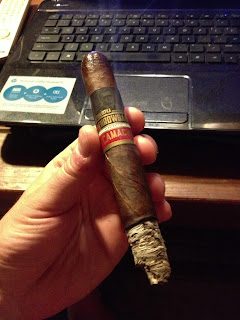 Lighting up the cigar it shows a nice flavor profile that shows the greatness of the tri-country filler. I am getting some lovely floral, citrus and cedar notes, but I am also getting lots of spices and coffee notes. There is a nice balance between peppery and sweet and it is a very nice flavor profile. I would say it shows some drier flavors overall and I am digging this smoke. I would say the body on the cigar is at a medium to medium full and the strength is at a medium full level. There is nothing about the cigar that shows one particular quality that I would expect from a cigar using the tobacco it uses, and that is always interesting to see. The construction on the cigar is terrific and I am getting a great burn line that has a nice charcoal coloring to the ash. Overall the cigar has a solid beginning and I look forward to the second third. 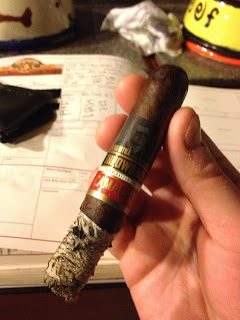 I am in the second third of the cigar now and I would say that it is in this third that I see a rise in the spiciness and peppery flavors. I feel comfortable in saying that I am getting more Honduran qualities now and that is because I am getting some distinct floral notes along with the flavors. There are sill some cedar and coffee qualities to the cigar, but this is a cigar that shows the spicy and peppery flavors in this third. The construction on the cigar is still terrific and it still possesses that great burn line with a beautiful nice light charcoal colored ash. I would say the strength of the cigar has risen in this third and is easily over medium full and the body of the cigar is at a medium full level as well. This is a cigar that grows on many levels as it progresses and that is what you want for a cigar. 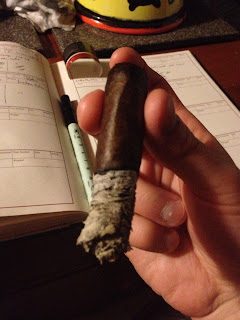 When I get into the final third it begins by showing more strength than before and it has some darker flavors with an increase in temperature. It begins off by not smoking too hot but that changes shortly. The strength of the cigar eventually tapers off and it finishes between medium full and full. I would say the body of the cigar in the final third is medium full but I do not really finish the cigar. The nice flavors of pepper, spices, cedar coffee, citrus begin to taper off and I am left with a burnt floral and charred woody flavor. It is no enjoyable and not worth smoking. The construction on the cigar in terms of the burn line is still very solid and the ash is a very dark gray, but the temperature with each draw is too much. It is disappointing to say, but this is a cigar that smokes well all the way into the end. 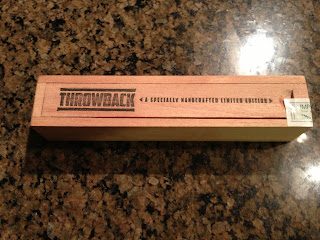 The first two thirds of this cigar were very solid, and if I were to only smoke those parts of the cigar I would have given this cigar a higher rating. I felt it got really hot and the flavors were killed by the strength of the cigar and the heat generated as well. I really had to put it down at that point and it was a shame. Smoking my first one I was told by a good friend that it is not a cigar you will nub and he is absolutely correct. This is a cigar you smoke about 75% of and then you put it down. Up until the end I found the flavor profile enjoyable, and while somewhat consistent, it was still tasty. I felt the cigar showed some qualities of Davidoff, Camacho and Room 101 with this cigar, and it made me wonder who was on the blending team for this cigar. At the end of the day I give this cigar an 87. Of the cigars I smoked for this review they each showed different levels of performance in the final third and neither excelled. 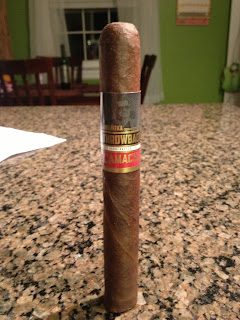