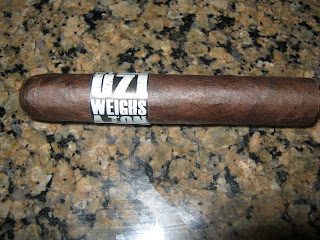 At the 2011 IPCPR, Drew Estate announced the release of the MUWAT, or My Uzi Weighs a Ton. The cigar was released by Subculture Studios, and was a cigar that was crafted between the collaboration of Drew Estate and Joya de Nicaragua. The cigar got its name from the Public Enemy song Miuzi Weighs A Ton, in which they claimed that… wait for it… “their Uzi weighs a ton.” The intention of the cigar was to create a smoke that captured the needs of most modern day cigar smokers, and produce a cigar that had a large ring gauge, 60. I enjoyed a couple of the sticks here and there, but the smoke was never my kind of smoke, and because of that I did not review it.

Eventually, Subculture Studios announced that they would be release a new vitola bearing the MUWAT name, and the cigar would be made in a single vitola that would reach to all other cigar smokers. The cigar was originally released to only one retailers, but it is now working its way national. I was thrilled when I heard this cigar would be made in a smaller vitola, and was hoping that with this change, the cigar would be quite simply better. The cigar itself is made not at the Drew Estate Factory, but actually at the Joya de Nicaragua Factory. The cigar, like the MUWAT, would be composed of tobacco by Drew Estate and Joya de Nicaragua, and because of this would offer those great Nicaraguan flavor profiles, and the unique and flavorful tobacco that Drew Estate uses on their fine cigars.

Looking at this cigar, I already love it much more than the original MUWAT releases, and that is because of the size. The cigar comes in a beautiful petit corona that measures 4′ with a 44 ring gauge. I know some of you love those massive ring gauge cigars, but put those babies aside and grab this flavorful little firecracker! The cigar is slightly different in blend than the other MUWAT smokes, and features a Mexican San Andres wrapper. The cigar has a Connecticut Shade binder, and features Nicaraguan and Brazilian fillers. The Brazilian tobacco is Mata Fina seed. The cigar has a nice aroma of cedar, nuts, earth and cocoa, and it is not very spicy or sweet on the nose. It has a great wrapper that is dark and toothy, and there are few veins present. I would say the coloring falls between Maduro in Oscuro and has that dark chocolate bar vibe going for it.

After lighting up the cigar, I begin to get tons of smoke, and it is showing some dense flavors to it as well. There is a nice flavor profile of cocoa, rich earth, damp wood and spices to the cigar, and there is a bit of pepper present with that. There are some subtle coffee flavors present with the cigar, but nothing to major. It is really a flavorful little stick, and so far I love it much more than the traditional MUWAT smoke. It is producing a lovely burn line with the cigar, and it has a nice light gray ash, almost white. The strength level is not over the top with this stick, and it is slightly stronger than medium in body. I would say that it is close to medium full in body, but not quite there. It is producing smoke that is perfect for rings, and it is burning very slow.

When I get into the second half of the cigar, there is an addition of coffee notes to the cocoa flavor profile, and there is a bit of cinnamon flavors present with the coffee. It still has that rich earthy flavor profile to it, and there is that damp wood and pepper flavor present as well. Flavor wise, it shows some similarities to the bigger MUWAT, but also shows the great wrapper flavors in this compact smoke. The cigar is still burning slow and cool in this second half, and the ash of the cigar is holding on firmly while remaining nearly white in coloring. The strength level of the cigar has been staying at that medium/medium full level, and I could smoke this cigar at anytime of day. As I find my way at the tiny nub, I put the cigar down when it is still cool and flavorful.

Looking back on this cigar, I would say it is the best of the smokes bearing the name MUWAT, and it was an enjoyable petit corona. I am a fan of the petit corona vitola, and while this had some nice flavors to it, and strength, it did not possess a complete experience that I would want. With the flavor profile, I would smoke it more often in the wintertime or fall, not summer, and it is a great quick smoke. It is interesting to see the collaborating between Drew Estate and Joya de Nicaragua, and I would have loved to see Jonathan blend this cigar hand in hand with Dr. Alejandro Ernesto Martínez Cuenca, rather than on his own. If you are looking for a quick smoke that has some nice flavors and decent strength, than this is a definite pick up. I give this smoke a solid 90, and will enjoy it again down the road.